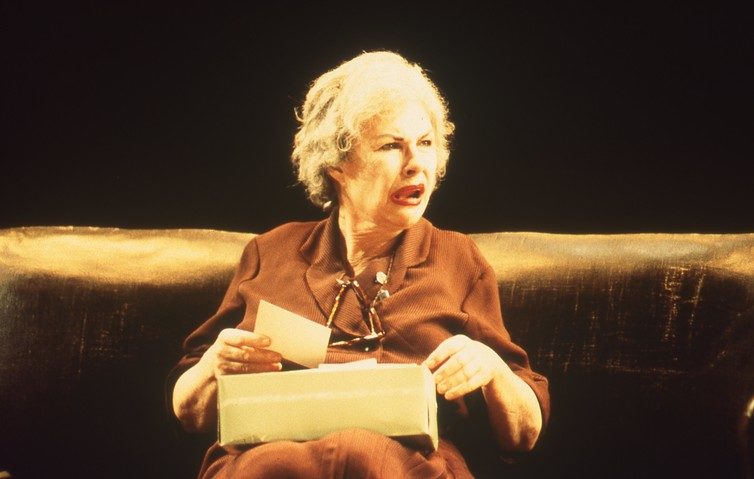 Miss Docker undermines everything and everyone around her. Robyn Nevin in "A Cheery Soul," 2000 Photo Credits Heidrun Löhr ©

In 2004, Melbourne Theatre Company, where I worked at the time, asked me to write a short history for their 50th anniversary. A battered box was duly wheeled into my office, containing material from previous celebrations and books of yellowing press clippings.

And there was something else. In a plastic folder, I found carbon copies of 48 letters between Patrick White and then artistic director of the company, John Sumner. The correspondence extended over ten years, but the bulk concerned productions of two White plays, Season at Sarsaparilla (1962) and A Cheery Soul in (1963). 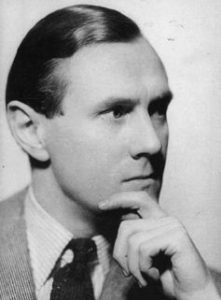 If the Doll can be said to provide a beginning for Australian drama, these plays give a sense of its future. In their fractured narratives, poetic language, fable-like characters, and resonant symbolism, they bring an uncompromisingly modern and Modernist sensibility to Australian theatre.

White’s other plays of this period, A Ham Funeral (1961) and Night on Bald Mountain (1964) are also groundbreaking. But A Cheery Soul stands out because it was White’s favorite, and because the degree of calumny it attracted then is in stark contrast to its high status now.

In fact, it is a sharp reminder that critics and audiences can be ignorant, unfair, and narrow-minded; that box-office success is not always – and perhaps not often – a true reflection of the value of a drama.

Here’s White writing about A Cheery Soul just after it closed:

I received the royalty statement from Ellen. It is, indeed, a sad little sum, but money or no money, it will remain the best of my four plays to date. I also had a cutting from the London Stage reporting on the year’s theatre in Melbourne, signed RS. It was the crudest kind of reporting, not mentioning much more than the plays which had been done. A Cheery Soul is said to have ‘upset everybody who saw it’ but the hit of the year, and one which is ‘bound to reach London,’ is Breakfast with Julia. (Letter from White to Sumner, 16 January, 1964)

A Cheery Soul is a series of loosely connected scenes from the life of the Miss Docker, an old lady of powerfully invasive charitable intent, a pillar of the local church, and an underminer of everything and everyone around her.

She is, in short, a monster, and takes her place alongside other memorable monsters in Australian drama like Jock from The Club, Monk O’Neill from Stretch of the Imagination and Ana from Neighbourhood Watch.

In the theatre, unlike outside it, monsters are fun to watch. As Miss Docker careens through the lives of the dozy inhabitants of Sarsaparilla – White’s imaginary prototypical Australian suburb – the havoc she wreaks is both painful and painfully funny.

MISS DOCKER (sighing) Ah, the men! One day I’m going to tell you all about the men in my life. There’s some won’t believe, but I’m not forcing anybody to accept the truth. It’s like religious faith. Take it or leave it, I say. (Sighing again) Yes, the men! (Gazes out of the window above sink.) Would that be a hydrangea? That Staggy, sickly thing over by your rotary clothes-line?

MRS CUSTANCE I never prune it.

MISS DOCKER What? You’re not one of those who’re afraid to prune?

MRS CUSTANCE It’s useful for drying things on. When they overflow the line.

MISS DOCKER But that’s not a hydrangea’s purpose.

A Cheery Soul is deceptive. The first act, set in the home of Mr. and Mrs. Custance, a couple who have unwisely invited Miss Docker to stay, is realistic in style. The second, when she moves on to the Sundown Home for Old People, starts to drip-feed in surreal vignettes of past memories and inner states of mind.

The stage is broken into different playing areas, and White uses them like an organist to create patterns of larger dramatic meaning from smaller, disparate actions. The old women in the Sundown Home are sometimes individuals, sometimes a Greek chorus commenting on Miss Docker’s wall-eyed benevolence that White described as “the destructive power of good.”

A persistent theme is loss of faith and the proximity of death. The Sundown ladies contemplate their used-up lives in a reverie of astonished melancholia, while the few suburbanites who do attend church are anxious and bewildered. Against this spiritual deliquescence, Miss Docker stands out in obdurate, insensate vulgarity. Always popping up where she isn’t wanted, and saying what isn’t needed, she doles out her “help” in a way guaranteed to exacerbate the fear or erode the contentment of its unfortunate recipients.

What drives Miss Docker is a presumptive belief that she knows the will of God. A Cheery Soul becomes a slow disabuse of this notion, as people recoil from her with instinctive repugnance and she is increasingly isolated.

The play ends with Miss Docker alone on the cold, windy street to the crematorium, being peed on by a local dog and sniggered at by a passing swaggie.

The history of theatre is full of great novelists who have written pedestrian plays. A Cheery Soul is not an addition to this corpus. Apart from anything, it is a beautifully constructed stage work. Its dream-like storyline is dramaturgically effective, while White’s ear for the Australian vernacular and eye for the foibles of 60s suburban affluenza clothe it with extraordinary literary density and force.

Here’s Miss Docker, for example, left on the side of the road when, typically busybody, she leaps out of a mourners’ car to take charge of a funeral possession:

FIRST CHORUS For a moment she stood

MRS HIBBLE … But not huge enough!

FIRST CHORUS The procession gathered itself..

MRS HIBBLE The widow’s car, of course, was only part of the procession.

MRS LILLIE What is happening? We shall never know.

(MISS DOCKER is left alone in a white spot. CHORUS will no longer be seen, only heard.)

MISS DOCKER (frantically running a few steps in direction of vanishing car) Hey! Have a heart!

It is not hard to see why Australian audiences of the early 1960s, parochial, moralistic, and feeling inferior to their European counterparts, rejected A Cheery Soul just as the Sarsaparillians reject Miss Docker. The “cultural cringe,” as AA Phillips called it, has done more damage to the arts in Australia than lack of money, market, and media exposure combined.

But there is another reason why White’s plays did not find the reception they deserved, and it lies in the inability of the theatre of the time to fully realize their complexity and daring.

It was only in the 1970s, with the team of Jim Sharman (director), Brian Thomson (designer), and Robyn Nevin (Miss Docker), that White found a group of artists who did not regard A Cheery Soul as “technically flawed” – a critical judgement hung round its neck like a burning tyre.

With White’s exit from the theatre in 1965, Australia lost more than a great playwright. Putting his four early plays next to Rusty Bugles, The Torrents and Summer of the Seventeenth Doll, the twin poles of our national drama become clear. It has two trajectories: on the one hand towards an emotionally satisfying realism, on the other towards an intellectually challenging non (or anti-) realism.

These impulses are not entirely separate, and they combine in sometimes surprising ways, as we shall see later in the series. Nevertheless, they have different aims and motivations, and find expression on the live stage in radically different ways.

White’s position in the Australian dramatic canon is crucial because up until his appearance, realism dominated. Despite the negative response his plays provoked when first performed, they changed what was imaginatively possible in our theatre, and provided playwrights with a new axis of creative exploration.

This article is part of an on-going series examining the great Australian plays.