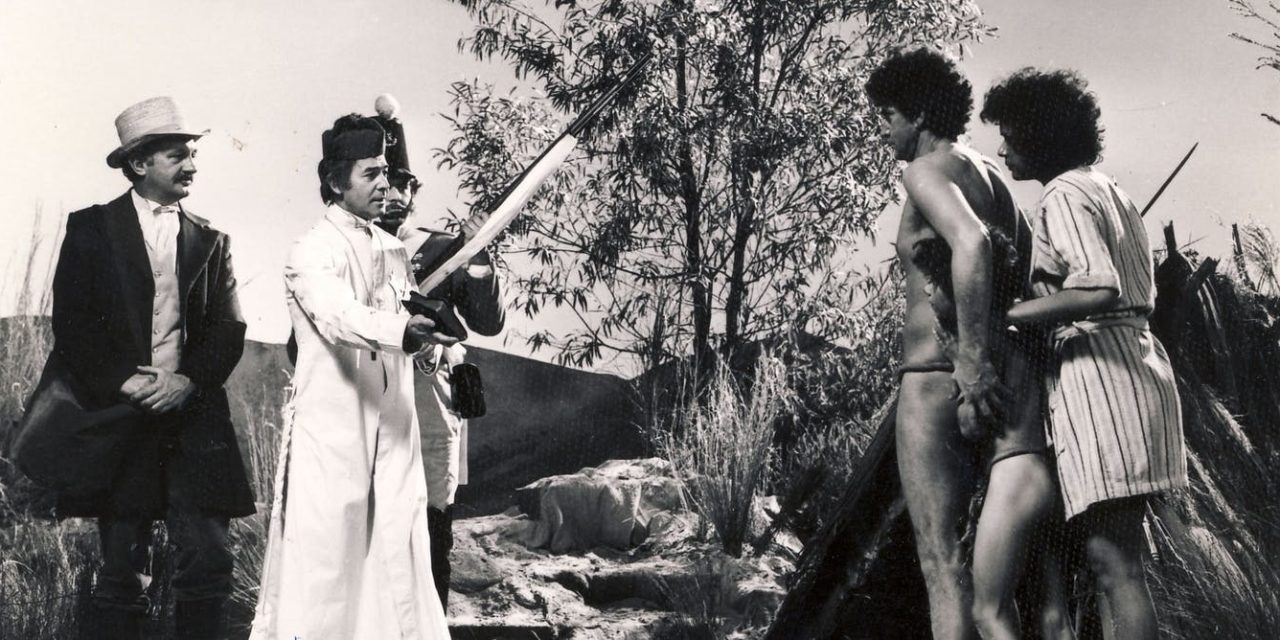 The opening scene of "The Cake Man," recreating the arrival of the British in Australia. Currency Press

Indigenous Australian activists and artists have consistently utilized the potential for theatre… to create different frames…of Indigenous Australians…In a show like Basically Black (1972), the “gaze” as an expression of racial objectification was returned…Following this work, writers such as Robert Merritt, Kevin Gilbert, Gerry Bostock and Jack Davis individually and collectively altered the range of representations of Indigenous Australians in Australian theatres and writing. In doing so, they increased awareness of issues affecting Indigenous people and related those issues to [them] as human beings.

Indigenous Australian culture is one of the oldest on the planet, stretching back thousands of years. Indigenous engagement with colonially derived theatre is of shorter duration, and it is only in the last 50 years that Indigenous playwrights, in the European sense, have emerged. Robert Merritt, author of The Cake Man, is one of this cohort. Written in 1975, his play comes after Kevin Gilbert’s The Cherry Pickers (1971) but before Jack Davis’s No Sugar (1985).

I choose it for this series both because it is representative of a rich seam of Indigenous playwriting talent, and because of its singular, and singularly haunting, nature. The Cake Man is, on the surface, a gentle work, with an elegiac, long-suffering tone reminiscent of Chekhov’s plays of rural stasis. Yet running through the narrative is a wave of political anger and dismay, all the more powerful for being so thoroughly dramatically integrated.

The Cake Man is about the mission experience for Indigenous Australians, and the indignity, injustice, and often outright exploitation that came from being “protected” by white Australians with little knowledge and less interest in the traditional culture their arrival had near-fatally disrupted.

The play is in three parts. The first section of the first act is a short, symbolic re-enactment of colonial settlement, with an Aboriginal Man, Woman, and Child being invaded by a Priest (carrying a bible), a Civilian (carrying a bag of trinkets), and a Soldier (carrying a gun). It introduces the theme of cake that runs throughout the action–the cake that rewards and degrades in equal measure–and the setting for the rest of the story: a rural mission.

Read more: Friday Essay: Dreaming Of A White Christmas On The Aboriginal Missions

The second part of the act is a direct-address monologue by a man who at first glance seems to be the central character. Sweet William is “[an] Australian Aborigine…made in England,” and in a long, inebriated speech he holds forth on life, wife, and days spent knocking on doors “mak[ing] inquiry, to discover if possible what is it I have that you now want.”

As he talks, Sweet William drinks and the question of whether alcohol has unmanned him, or being unmanned has led him to alcohol, hovers over the remainder of the play like a dark cloud. 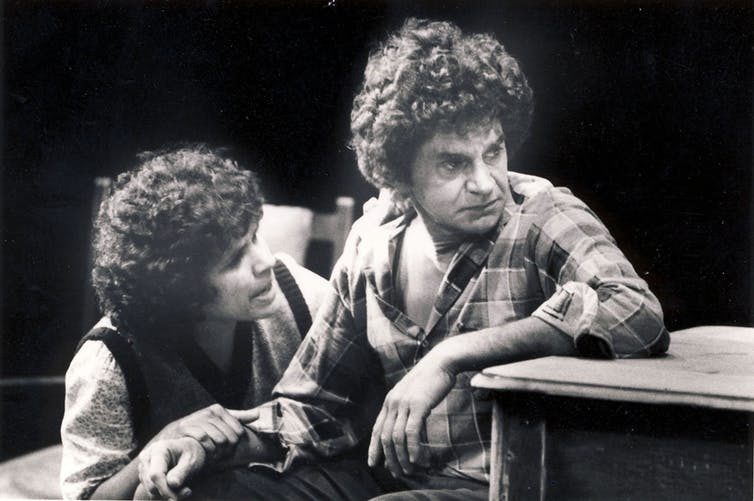 Ruby and Sweet Williams in The Cake Man. Currency Press

Acts 2 and 3 show life on the Mission. Ruby, Sweet William’s wife, and Pumpkinhead, his young son, live in a fibro shack with the barest of amenities. In a cot is Ruby’s new baby, suffering eye sores that have to be regularly washed if they aren’t to gum shut her lids. Ruby is a powerful figure. George Ogilvie, who directed the premiere of the play, commented:

In rehearsal I had to stress the fact that the role of Sweet William should not be softened with sympathy; because the naturalism of the play is very important. The man’s hopelessness is apparent, particularly in the scenes with his wife, who grew…to become the central focus…The play [deals] with Ruby’s problems of a drunken husband and an errant son, and Pumpkinhead’s revelation at the end: that his father has finally made a decision. In a sense the father becomes a sacrifice. Pumpkinhead is to be the man who will last the distance.

Ogilvie is right about The Cake Man’s style, which is a beautifully nuanced realism. The dialogue exchanges between the family–the love and loss freighting Sweet William and Ruby’s relationship, the anger and need in Sweet William and Pumpkinhead’s–are a masterly evocation of mood and locale. The grinding poverty and emotional paralysis of the mission are perfectly rendered, a capturing not so much of the outward detail, as the inner truth, of racial subjugation.

The play breathes with the quality of lived experience, reflecting the fact that Merritt himself grew up on the Erambie Mission at Cowra, and that Pumpkinhead, all elbows and outrage, is a lot like the boy he once was.

But there is another dimension to the play, poetic and subtle. It draws its intensity from two sources: Christian imagery and Dreamtime stories. In the minds of Merritt’s characters these blend into strange hybrid symbols–and into the tale of the Cake Man, half-Jesus, half-Aboriginal spirit.

Here’s Ruby, in the middle of the play, recounting the story to Pumpkinhead, at his request, for the umpteenth time:

Ruby: Long time ago, when Dreamtime’s ending, Jesus, he sent the Cake Man over to the sea to find the Kuri children. And he come…

Ruby: He come, with the cake, the cake that was love from Jesus, and he’s lookin’ round then for good children to love and give cake to…

Pumpkinhead: Only the bad men stuck a stick in Cake Man’s eyes!

Ruby: That’s the truth, the bad men, the wicked men done that …

Pumpkinhead: And then the Cake Man lose his way, and can’t see because his eyes is blind, and he can’t see the Kuri boys, only the gubba kids he see ever since them bad men done that! Cake Man’s a blind man…

Ruby: Yes, and all the time since then, the Cake Man been walkin’ around the bush lookin’ for something’ he’s forgot about what it was…

Pumpkinhead: But he still got all the cakes, and we gotta find him and tell him!

Ruby: He still got all the cakes, that’s right, but he don’t know any more about who Jesus told him to give ‘em to…

Pumpkinhead: He forgot! He don’t even know he is the Cake Man! His eyes gone blind, and he forgot even who is s’posed to give the cakes to, and he forgot about havin’ to do it. He don’ know who he is… gotta tell him!

Ruby: Pumpkinhead, who’s tellin this story? [Pause] Well then, what we got to do, we got to wait for him, got to keep lookin,’ till we see him there, and then we tell him about the cakes that Jesus sent to Kuri children, make him know himself, remember he is the Cake Man…

Pumpkinhead: Got to stick him in the heart with a spear! Story says that…a spear!

Ruby: Yes, story says that, but I don’ know about that part.

Pumpkinhead: Yeah! That’s the best part, Mum! [Relishing the idea] When the Kuri boy finds the Cake Man, then he got stick a spear the Cake Man’s heart, right in his heart, and then the Cake Man remembers, and he knows who he is, that he’s the Cake Man Jesus sent one time…

Ruby: Well, that’s the story…my Daddy told me…yes, it is.

Symbols of integration, separation, belonging and escape recur again and again in Merritt’s play, like soft, somber echoes. Sweet William returns from a half-hearted exercise looking for work, to fall asleep, drunk, in the one chair in the house. 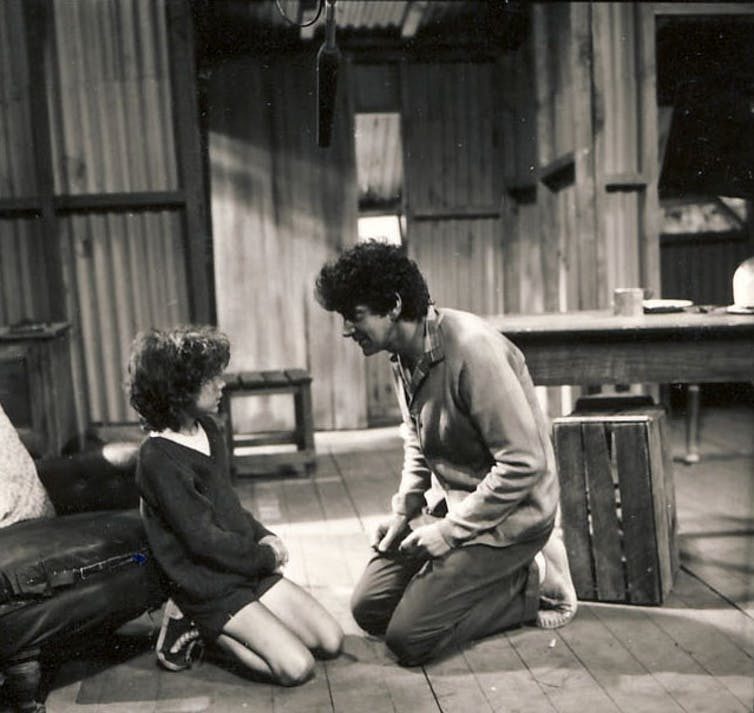 Pumpkinhead and Sweet William in The Cake Man. Currency Press

Ruby forgives him, but can he forgive himself? Pumpkinhead won’t even look at his father. His fury at the squalid conditions in which they are compelled to live, and Sweet William’s inability to do anything about them, irradiates the action.

Pumpkinhead has been stealing coal, and this prompts some interaction with the white characters in the play, who are referred to by generic titles: Mission Manager; Inspector; and Civilian. It is from the last that Pumpkinhead has been pilfering fuel to keep warm through the long, bitter, winter nights.

Catching the boy in the act one day, but unable to lay a hand on him, Civilian is incensed, and the darkest moments in the play are the racist diatribes that come of his mouth about the “blasted lot of delinquent black baby-bushrangers.” Despite the sickening content, the writing is never bombastic. It has the ring of truth about it.

When the Inspector and Mission Manager bring Civilian to the family’s shack, however, the story takes an unexpected turn. Civilian sees Ruby’s baby in her cot and runs away in shock. Next day, when Pumpkinhead goes to return the coal he stole–under Ruby’s stern instructions, now she knows where it really comes from–he finds “a large deep box filled with goodies.”

Civilian appears, and boy and man lug the box back to the Mission, out of which comes a big cake. To Pumpkinhead, Civilian is now the Cake Man, and the stage is suddenly filled with Indigenous children embracing him and screaming in delight.

It is a stunning reversal and the effect is to complicate the drama without lessening the force of its political message. It is as if the play has expanded, and we are suddenly in a world of larger meaning. Ruby, Sweet William, and Pumpkinhead acquire a biblical aura: the Original Family. Civilian–though not interestingly the Inspector or Mission Manager–becomes capable of regret and remorse. And if his giving cannot replace what was taken in the first place, it takes the drama to a new spiritual level nevertheless.

Sweet William decides to leave for Sydney. The son can now look at the father with respect, and though Ruby and her husband know that ultimately what awaits him is more degradation (he’s unfairly arrested the moment he arrives), the decision is all. Pumpkinhead sees that positive action is possible.

The Currency Press publication of The Cake Man is a most useful document, containing as it does a memoir by Mervyn Rutherford, a policeman at the Erambie Aboriginal Mission, and a history of the town of Cowra. It also contains a quote from Nugget Coombs who, under the government of Gough Whitlam, was to help dismantle the Mission system. Coombs writes of going out into the Western Australian desert with a group of Aboriginal elders.

As the day progressed there was an obvious increase in statur…in these men. We went out that night and sat is a circle in the sand with two or three fires between us and sang the songs of the cycle…I sat amongst them, putting my hand on the hand of the man next to me, trying by moving with him to feel the complex rhythm of the song. The night was dark, there was no moon, the only light being from the stars and the fires. For me, this was one of the most moving, aesthetic and emotional experiences of my life. In the circle I realized that these people, whom I had presumed to think of as derelicts, had dignity and authority backed by tradition which ran back through time infinitely beyond that which our own could claim.

Or, as Sweet William puts it in the Epilogue to The Cake Man: “Two realities. [Pause]. And I’ve lost one. [Pause]. But I want it back…I need it back. [Pause]. Not yours…mine.”

This article was originally published on The Conversation on January 31, 2018, and has been reposted with permission. Read the original article.