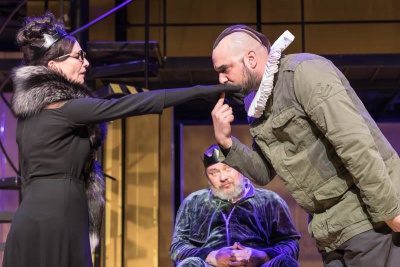 His face is yellow beneath the high-gloss strap of the black crown. It’s almost phosphorescent. He is Richard the demon who knows what to think of a human being in order to corrupt him adequately.

The play known as a cloak-and-dagger history play turned into a swap-scented, repulsive horror show in the hands of guest director Andrei Şerban. It is ethereal and panoramic, graceful, and unbearable at the same time, and manages to be crisp and eternal without centrally sanctionable references to current affairs. But it succeeds at wrenching our guts.
The scenery is dominated by the golden aura of power. (Scenography: Róbert Menczel.) There is a strip of light running around near the ground to facilitate visual ventilation, above it we have a sulphuric yellow background, and in the middle, a spiral staircase braided from iron and leading up to a hanging corridor that caters for the needs of heights and highnesses. The space below the royal walkway is sometimes green (for example during times of reconciliation), at other times it is orange or blood red, depending on the fuming temperaments. (Lights: Sándor Baumgartner.) The yellow silk ruffles or the bowties appearing on the people of the court compensate the lack of personality by signaling the abundance of goods. (Costumes: Fruzsina Nagy.) During the course of the evening, we see only eleven actors. Some of them, however, playing three or four roles with exquisite transformations.
Should a chair be required, they need only to wave, and a stage-hand brings it in. When more space is wanted, he takes it out. We probably have Péter Závada to thank, who reanimated the text of the play, that while retaining all the values of István Vas’s fascinating translation, this “meta-theatre” sometimes emerges in small improvisational games as well. Delicately, like when we nudge up a balloon heading downwards with the tip of a finger. For we have everything that can become overwhelming for the spectator. Thunder, fireworks, drooling, blood and urine, and yet the audience is not disturbed by the struggle and helplessness of the despotic theatre of excretion. Everything has a purpose here. A tool is used when it is most valid and where it is most effective. (Except for the excessive use of the scene-slaying stroboscope.) The collaboration with Şerban was helped by the Romanian speaker Rémusz Szikszai, and the anglophone dramaturg, Anikó Szűcs. The musical soul of the performance is at all times Marcell Dargay. 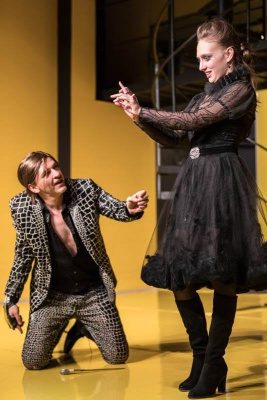 We already knew that the Radnóti Theatre had a great troupe. But how excellent they are individually as well, is proven yet again by this performance. In this review, we will have to forgo the in-depth analysis of the acting. Let us begin nonetheless with Márta Martin’s portrayal of the Duchess of York. (István Vas mentions at some point, that it was Kálmán Nádasdy, who pointed out to him the figure of the mother of Edward, Clarence, and Richard, and asked him, what kind of woman he supposed she had been. “Dragon mother” was their shared answer.) The Duchess played by Márta Martin is a rock detached from a cliff: leaden, grey, impenetrable.

Ádám Porogi and András Rusznák are on the stage in innumerable forms, with keen humility. They disappear through the trapdoor if needed, but they can also flit around the throne as dukes or courtiers. The servile Rusznák’s crest of hair moved by ticks of the head is an unfunny gag, and with it, Şerban puts a price tag on Richard’s environment as well. The clown scene of the paunchy assassins is unforgettable. György Gazsó and Zoltán Schneider report to work with accessories hidden in violin cases, and this moment gives us a glimpse into the depths of Richard’s soul. He is at home with them in this world.
The impeccable Hastings of József Kelemen and his smiling daftness is the embodiment of pompous hypocrisy. Familiar from the daily news. But when Zsolt László’s lanky Queen Margaret shows up and starts to speak, we hear thunder. The widow of Henrik VI possesses transcendental powers. Zsolt László’s performance as Margaret, as a ginger prince fidgeting with his mobile, and for a moment even donning the character of the author, is nothing short of amazing. And he is among those who read the score offered by Şerban with the greatest ease. Not that anyone on the stage had any problem doing so.
Edward IV portrayed by Zoltán Scheinder is a snuffling black grizzly on England’s throne. He leaves this world on his own accord, nothing has any influence on him except for his wife, Queen Elizabeth (Adél Kováts). And she is the calculating, fluent, official holder of power with thick, silvery fox fur on her left shoulder. We have watched Kováts for years on stage, and are still taken aback by the unexpected force of her temperament.
And then we have the polished communicator, the young Lady Anne (Eliza Sodró), who greets those assembled for the funeral of her husband with a quick “hello.” In her black frill dress she resembles a peahen, especially when on hearing Richard’s proposal, this already betrothed woman coquettishly lets her hair down loose. We have seen Sodró as a chirpy little sparrow, as an upset, Russian girl, but never as this sharp-clawed, clanging wildfowl. 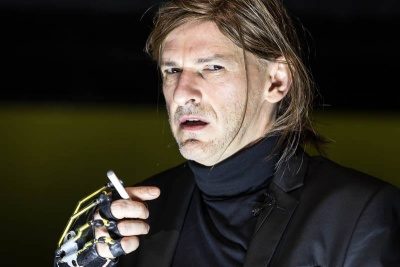 Buckingham, the kingmaker with mediocre talents and high financial hopes is played by András Pál moving like a weasel and appearing as a huge badger. I do apologize for these similes, but I am merely conveying the message from Fruzsina Nagy. András Pál’s head is shaved, and a thick, black tuft of hair runs on top of it. Add to that his slithering movements–and his almost bleating voice–and we have the perfect blood-thirsty, second-grade predator. And he thinks he can teach Richard about shrewdness.

But none is smarter than Richard. And none is more despicable. Whatever ill he may think of us, he is spectacularly proven right. His strongest virtue is feeling the moment, we could say “mastering the moment.” His opening monologue very cleverly is not delivered at the very beginning of the play, but at the moment when Gloster, who is to become Richard III, learns about the illness of his brother, the king. Behold the crack opened just for him! And without hesitation, he turns towards us with a grin, and says “Now is the winter of our discontent made glorious summer by this sun of York.”
It is a joy not merely in a mental, but also in a physical sense to escort the guest performer Róbert Alföldi, as he constructs and deconstructs Richard. His tantalizingly accurate and clear articulation almost leaves a trace in the air as he announces, executes, and finally summarizes the master plan. Endre Ady reproached the actor playing Gloster in a performance long ago, saying his voice was not adequately flexible “when speaking the malleable, serpentine words of treacherous love.” Well, he could hardly have anything against Róbert Alföldi. This rigor loosens up later as it should, the voice falters and breaks, and then turns into shrieks. All of which is accompanied by appropriate changes in the visuals as well.
Gloster’s shoulder length, hazel-brown hair tied into a queue is a wig worn out of vanity. He wears a crocodile pattern suit with tight trousers, and the jacket hides a hump under the right shoulder. His right leg is iron, his right hand is a prosthetic hand with iron fingers, with which he can claw himself while screaming in moments when he seems to be losing. He pulls and pushes the desired crown like a conductor, and with it the subjects. And then he sheds his patterned suit. He drags himself to the trial in shabby, grey pajamas. But later he dons the black fur required for his reign, and he also puts the black crown onto his now uncovered grey hair. 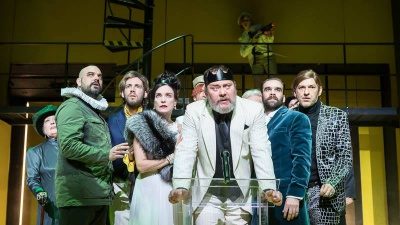 Although the play also presents us Gloster the warrior, the Richard of Şerban and Alföldi is unfit for battle. He is already fighting the haunting spirits. The battle itself is not more than billowing blue smoke. And what we here mistake for Richard, the one shouting for a horse, is merely the demon’s sizzling, otherworldly body hunched on the ground. His death is the result of an execution, not of a duel.

In Egon Friedell’s words: “Shakespeare surrounded the actors in these horrors with a mystifying aura of narcotic daemony, causing them to gleam with a strange snake-like iridescence /…/ These men affect us like certain gorgeous toadstools or those evil flesh-eating orchids, whose cruelty and cunning radiate a conciliatory aroma of mysterious beauty.”

On Şerban’s stage, while all these impressions prevail, we also get a smell of the sewers that can be ascribed to the often recurring, impressive sounds of dripping water.
There is only one difficulty in the final moments. Lord Richmond, the head of the enemy army is only talked about, his character is practically cut out. This poses the substantial problem of a well-paced closure of the tragedy. The real Richmond was the grandfather of Queen Elizabeth, Shakespeare’s sovereign, so the author could not afford to spare the ink to glorify him. We have no such obligations, and someone from our own history would enter in vain, he would be out of place, as here and now we are talking about “miserable England.” It was probably the pecking order of the cast that led to the choice of Adél Kováts, the former queen who just shed her military garments to say the closing words in lieu of Richmond. Majestically. And slowly.
When she is at “Let them not live to taste this land’s increase/ That would with treason wound this fair land’s peace!” an unknown, brooding figure appears upstairs. And when we hear “Now civil wounds are stopp’d, peace lives again/ That she may long live here, God say Amen!” the chap stops, and an apprehension sneaks into our hearts: or not. Or–not. And only then can we erupt in applause.
This article originally appeared in Revizor Online on May 16, 2018, and has been reposted with permission.
Translated by Péter Papolczy