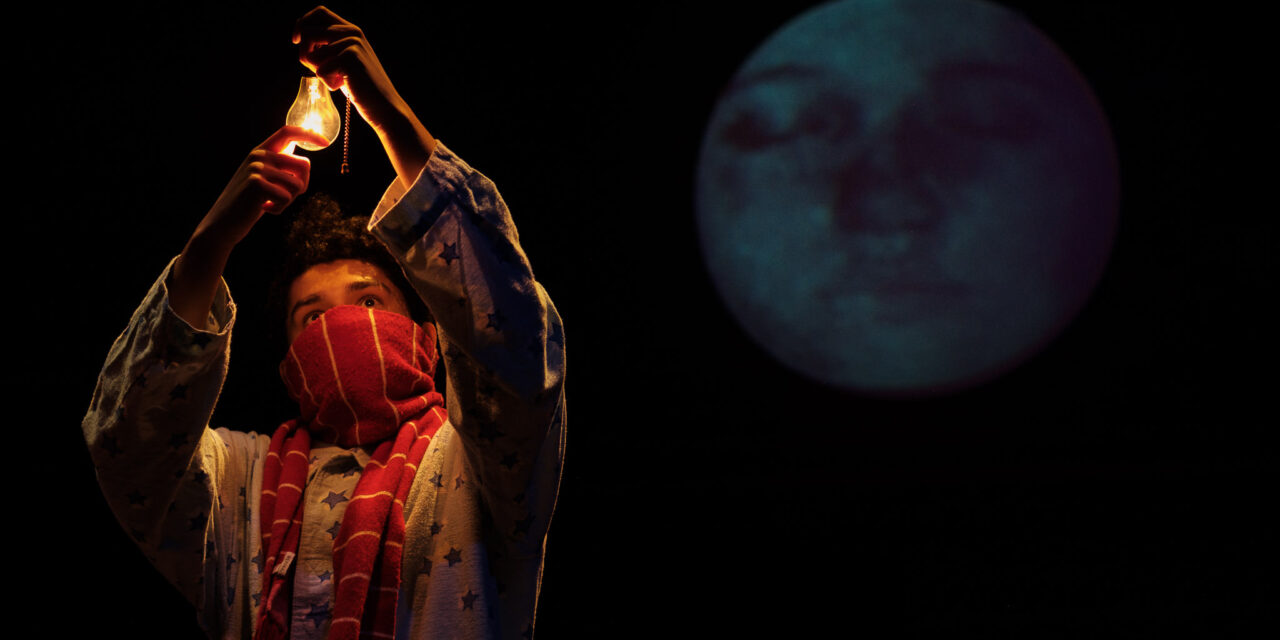 Robert Voigt grabs a light and confronts his fears in "From the Fishbowl", directed by Wolfe Bowart. Photo Julius Schlosburg. Lighting design by Forrest Tallbull. Co-produced by the University of Arizona School of Theatre, Film & Television with The Scoundrel & Scamp Theatre, April 2021

This year, the University of Arizona School of Theatre, Film & Television partnered with The Scoundrel & Scamp Theatre to present From the Fishbowl, a new fantastical work devised in collaboration with Theatre Studies and Design & Technical Production students and directed by illusionist and physical theatre creator Wolfe Bowart. Created during the winter of the pandemic, the production features seven actors gliding magically and seamlessly between stage and screen as they explore what it means to live in a world that has become both socially distant and yet somehow more personal. I asked two of the show’s creators—director Wolfe Bowart and lighting designer Forrest Tallbull—to reflect on the journeys that brought them to this theatrical moment, the process of devising physical theatre in a digital space, and what new value “a world interrupted” has brought to their theatre-making.

Wolfe Bowart (director): I grew up with artists in my family who had a strong ability to tell STORY—whether in paint, words on the page, or a suppertime yarn. I began experimenting with film and later video as a kid and continue to use projected media in my visual theater work today.

With all projects it is important to recognize, reflect and to honor the process that led to the end product. The same goes for From the Fishbowl.

While developing From the Fishbowl in our online conference rooms we looked at pre-cinema—from cave paintings animating by fire light, to hand shadow puppets, magic lanterns, praxinoscopes, the work of Muybridge, Méliès, the Lumiere Brothers and we came to see ourselves in that long line of experimenters playing with light.

Light played a large role in our development of From the Fishbowl. Often in theater a work has been written and then it is staged and lit. This project was unique in that Forrest Tallbull agreed to come on board and be part of the process from day one. His contributions to the project were invaluable and personally it has been a goal of mine to start working with designers from the beginning of the development process rather than as a necessary add-on. MJ Barbee confronts his identity in a raucous game show in From the Fishbowl. Photo Julius Schlosburg

With From the Fishbowl, we continuously challenged ourselves to tell this story with light and sound. This conversation continued up until the final edit of what we see now on the screen. The piece begins in the shadows of the past and ends in the shadows of the unknown, of the future. Hopefully along the way the viewer comes to know the characters, to see a bit of themselves in their faces and identify with the different challenges they are facing. It is our hope that the audience gets the feeling that they are not alone, that even if we’re not together, we’re in this together.

We began with the frame and the face and recognized that this quarantine bubble, this virtual fishbowl can be distancing and at the same time quite personal. In our Zoom rooms we all become our own filmmakers in a way. Ready for a close up? Lean forward, “how’s my lighting?” “You’re on mute.”

For the most part From the Fishbowl was not recorded on Zoom but rehearsed and then filmed separately in students’ own living spaces, and finally, onstage. That in itself was a challenge as actors are not looking at each other live but interacting with imagined characters. This is not unlike working with CGI characters and motion capture and, in fact, several students experimented with a green screen set-up that made the rounds. We never once got together as a group and when we filmed the live staged parts of the production, we had one hour with each student/actor in the space with no other actors.

From the Fishbowl was unique in another way in that it was the first co-production between the University of Arizona School of Theatre, Film & Television and The Scoundrel & Scamp Theatre. This was an opportunity for acting students to work with a professional theater company in their own community and, albeit virtually, be able to forge connections in the theater community at large.

This has been a challenging year for many and From the Fishbowl reflects that year. The piece deals with some big subject matter: PTSD, Identity Crisis, Loneliness, Human Trafficking, Domestic Violence and Deforestation and yet the final product explores these subjects with grace, humor and lots of heart. In the end it leaves us with a sense of hope and community. Forrest Tallbull (lighting designer): Unlike most of my peers, I did not grow up with a “theatre” theatrical or performance background. I grew up on the Navajo reservation, where performances have different formats, like high school sporting events, rodeos, and cultural dances. It was not until my undergraduate years that I discovered the world of theatrical design. Going through design school helped introduce me to a wide range of theatre, from plays to musicals, contemporary dance, concerts, and ballet. It was a wealth of discovery. Now, the theatre is a common aspect of my continued growth. The concept of bringing ideas and imagination to life is self-rewarding.

From the Fishbowl features vignettes that combine our digital culture with the stage. The stories are about shared messages of emotional humanity that show our true selves—selves we evade in the digital world. When I arrived, there was no script or outline. Wolfe [Bowart, director] wanted to hear ideas from the entire creative team, including the actors, designers, and even the stage managers. Wolfe said, “you have the stage to talk the world—what would you say?” That was the starting point of the creative process. Wolfe was open to all the creative team’s contributions for exploring thematic ideas and visual movements for the production.

Designers not only contributed to the design elements of the spectacle; we were invited to tap into the emotional creation of the stories. Ideas were continually evolving, and as a designer, I had to figure out how to support each one using visual lighting elements of color, highlight, angle, intensity, and movement. These elements are tools that help connect each story’s emotional quality to visual tone and imagery, moment by moment. For example, by taking the time to create a special effect on the lighting console, I used light to symbolize a heartbeat’s action and movement. It was exciting to collaborate with a director who welcomed a designer’s emotional connection to the work as part of the production’s narrative. In From the Fishbowl, Becca Worden brings a pillow to life. Sweet and playful, or something more sinister? Photo Julius Schlosburg

As a designer, I feel I must help storytelling with composition, and even though we had obstacles surrounding the pandemic, we worked together to bring about a theatrical arrangement that delivers a production. The actors and the other members of the creative team deserve high praise for keeping themselves safe and healthy during the process. We did not have the luxury of our usual tech process once we hit the stage, but the cast and crew were so well prepared they made the process a joy. The collaboration with The Scoundrel and Scamp Theatre was terrific. They were immensely supportive of the actors and design team. We had so much support from a director who encourages actors and designers to express their stories through their own artistic skills. As the lighting designer, I was able to express my emotional connection with the pieces using lighting as the foundation.

As a theatre student, I remember reading many play scripts written throughout history, and analyzing them in the context of historical perspective and cultural lifestyle. From the Fishbowl was constructed around the culture that faced the pandemic. It will be part of that historical timeline for audiences who see it. It is a unique and valuable example of theatre’s ability to evolve during the pandemic culture. Wolf Bowart’s bio: As a playwright and multidisciplinary performer, Wolfe Bowart’s work has been seen in twenty-five countries. Under his banner SpoonTree Productions, Bowart has written, performed and garnered international recognition for The Shneedles, LaLaLuna, Letter’s End, The Man the Sea Saw, and Cloud Soup. He has toured his work in venues ranging from London’s Southbank Centre to rickety wooden halls in the Australian outback. He is a recipient of the Creative Development Fellowship, awarded by the West Australian Department of Culture and the Arts, and a two-time Helpmann Award nominee in the categories of Best National Touring Production (Letter’s End) and Best Physical/Visual Theatre Production (The Man the Sea Saw). As a director and artist-in-residence, Bowart has brought physical theatre to people of all ages in conjunction with the Los Angeles Music Centre, Wolf Trap, the Ahmanson Theatre, the Playwrights Project, California Youth Theatre, the Virginia Avenue Project, the Mark Taper Forum, the University of Arizona, and Australia’s National Institute of Circus Arts. Forrest Tallbull’s bio: Forrest Tallbull is from Shiprock, New Mexico on the Navajo Tribal Reservation located near Four Corners area. Currently a graduate student at the University of Arizona, Forrest received his Bachelor of Fine Arts in Drama from the University of Oklahoma and an Associate of Applied Science in Technical Theatre from San Juan College. Forrest appreciates all aspects of the fine arts starting from the imagination to the stage. Website.

Thank you, Wolfe Bowart, Forrest Tallbull, and Kerryn Negus for your generosity and your time. 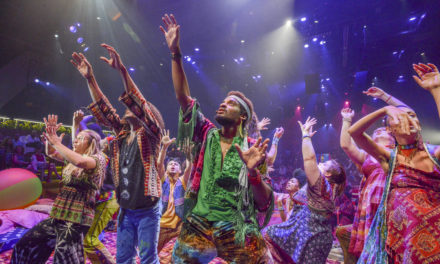 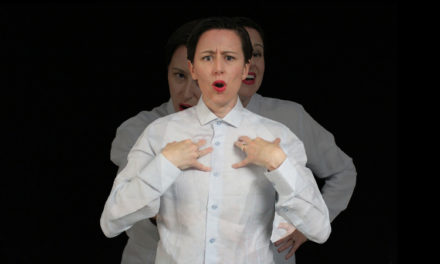