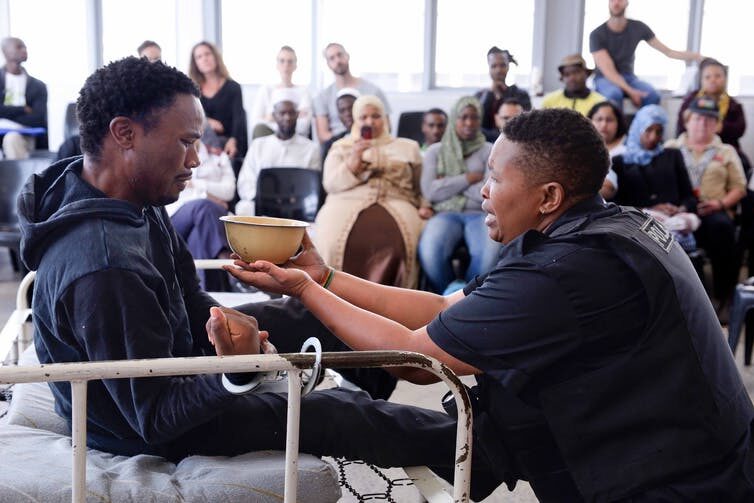 Portia (Mpume Mthombeni) tries to get her son Sipho (Zenzo Msomi) to eat as he withdraws from whoonga. Photo Credit: Val Adamson/Ulwembu

The drug whoonga has plagued South African communities for at least a decade, yet only gained significant public attention when it appeared more visibly in the inner-city and surrounding suburbs of Durban, the major city in the country’s KwaZulu-Natal province.

Also known as nyaope, whoonga is a street concoction of B-grade heroin, rat-poison (strychnine), and various other chemical components. It’s most commonly sprinkled into a hand-rolled cigarette and is easily accessible and sold more cheaply than other street drugs. Withdrawal, known as “arosta”, is reported to cause severe stomach pain, that only eases by smoking again, trapping users in a vicious cycle.

Often used by young people, the drug has had a complex and devastating impact on communities. Yet the government, city officials, and non-governmental organizations have struggled to combine forces and react with the urgency and meaning to the crisis. At times their responses even appear at odds with one other.

In 2014 we began working in Durban’s KwaMashu, Umlazi and inner-city areas. As a team of academics and storytellers, we wanted to see if theatre could unlock more humane and collaborative responses to whoonga. Some of the users we met were as young as eight years old and living on the street with a severe heroin addiction.

Over two years we collaboratively developed a play called Ulwembu (‘spider web’ in isiZulu). We have since performed it to diverse affected communities and for policymakers, impacting lives, and the production is now set to travel internationally.

Listening to the community

The Big Brotherhood, a KwaMashu-based theatre company had noticed the absence of fathers and good male role models in their community and in response created public storytelling processes, told by men. Our research would confirm that almost every whoonga user we met had an absent father.

In 2015 the group began collaborating with award-winning South African playwright Neil Coppen, Durban actress and ethnographer Mpume Mthombeni and myself, an educational sociologist (with mentorship from academics at Durban’s Urban Futures Centre).

The goal was to diversify the pathways available to users to either manage the risk associated with whoonga use or manage their way out of addiction.

In the research process, we could see that the pathologizing of whoonga users was a significant problem. We began to look at what was absent: meaningful care and empathy for users. Instead of stigmatizing and criminalizing them, we wished to address addiction as a mental health issue. It was also clear that there was a need to establish more dynamic and empathetic forms of partnership between government and civil society groups.

So we gathered oral histories of diverse citizens – whoonga users, police, parents, health care workers, community safety groups, social workers, faith leaders, academics, and others. We transformed these into an immersive theatrical production which ended up doubling as a policy brief.

The play tells the story of six people caught in the whoonga web. They include Bongani, a drug dealer; Portia, a police lieutenant on the front line of the fight against the scourge; her son Sipho; his friend Andile; and Emmanuel, a Mozambique-born shopkeeper.

The play traces Sipho’s descent from talented scholar and aspirant musician to drug user. It also tells the story of an ambitious policewoman and mother whose son gets caught in the whoonga trap. Portia’s inner conflict mirrors what we witnessed in our research across the city. Ulwembu explores the effects of addiction not only on those who suffer from it but on communities, families, and the police. It provides insight into the positions of those trying to control the trade, those who benefit from it, and those harmed by it – and how they’re all part of a complex social web.

To create Ulwembu we developed an interdisciplinary theatre methodology which we have named Empatheatre. Our hope was to create public storytelling encounters that form amphitheaters of empathy within which we could share real-life stories with the intention to inspire and develop a greater kindness in spaces of conflict or injustice.

In the published script, Ulwembu specifically shares the many stories of young whoonga users in Durban and explores the role police and government services play in the lives of vulnerable youth in the city.

The police were clearly a group we wanted to work with. An empathetic approach challenged existing policing responses and policy directives. Street-level drug addiction has, in South Africa, tended to focus on crackdowns, dispersal, and heavy-handed enforcement. Inspired by Paulo Frere’s Pedagogy of the Oppressed we realized we needed to also consider the pedagogy – or teaching – of the oppressors.

And so Portia, a policewoman who desperately seeks a balance between justice, mercy, and empathy, centers the narrative. The character is based on testimonials gathered from police officers as well as parents of drug users, allowing us to examine two strands of research through the lens of a single character.

The ‘oppressor’ dynamic of the police was detailed to us through interviews with users, social workers, and health care workers. Even some police officers felt that arrest quotas and crackdowns cause more harm than good and longed for an alternative. Portia was our way of showing how, when it comes to addiction, the oppressor – the police – can in a relative instant be transformed into the oppressed – a mother trying to save her son from addiction. No one is immune.

Ulwembu speaks to the realities of why people begin to use drugs in the first place. It does not aim to ‘scare’ young people into avoiding drugs. The life of a whoonga user is scary enough. Instead, it tells everyone’s part of the drug story fairly, without judgment. This was central to how we dealt with stereotyping and the dangerous myth machine that influences our perceptions of street-level users.

Since launching Ulwembu our team has become involved in ongoing forums with various players in the city, lawmakers, and government ministers. During our run at the Hillbrow Theatre in Johannesburg in 2017, we performed to members of parliament and organizations directly involved in drug policy. Afterwards, the director of the Hawks (the Directorate for Priority Crime Investigation) expressed how powerful the evening had been. Towards the end of 2018, the production was performed at the Drug Policy Week conference in Cape Town, with key local and international policy-makers in its audience.

Ulwembu has been invited to participate in the Drug Policy Alliance Reform conference in the near future (pandemic depending)— and so its international journey begins.

We began this process with the goal of responding to the complexities surrounding street-level drug addiction in Durban, yet found ourselves exploring and tending to a myriad of sociological, political, economic, cultural, psychological, and spiritual realities that, in turn, changed us and the production.

The script of Ulwembu also contains the production’s research and outcomes and is available from Wits University Press.

This article originally appeared on TheConversation.com on February 21, 2021, and has been reposted with permission. To read the original article, click here. 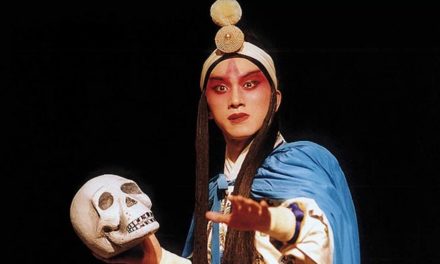 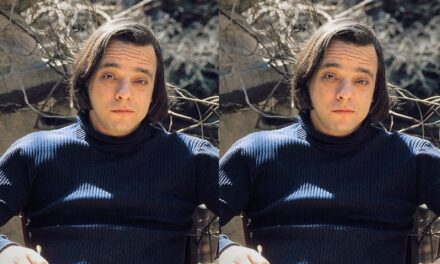