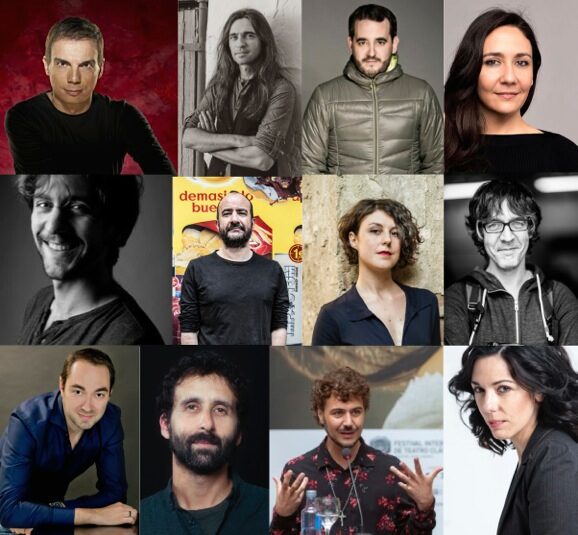 The playwrights featured here are a group who regularly premiere work in Madrid’s theatres with great success due to the style of their work and the themes they tackle. These authors are not as well known internationally as they should be because they write in Spanish instead of English, and their plays do not premiere in London or New York.

People who know the Madrid cultural scene might notice some Spanish authors are missing from the list: for example, Bibiana Monje, Borja Ortiz de Gondra (who lives in New York), Carlos Be, Denise Despeyroux, Guillem Clua, Jordi Casanovas, Lucía Miranda, and Marta Buchaca. The only reason they are not included here is because I am not as familiar with their work as I am with the others. Consequently, I will work to feature others in the future.

Alberto Conejero is probably the favorite of Spanish theatre artistic directors, theatre professionals, critics, and theatergoers for La Piedra Oscura, a play focused on one of the lovers of Lorca who was imprisoned, and his jailer, during the Spanish Civil War. He has a poetic style that reminds one of Lorca, an author whom he has adapted several times. A memoir is Conejero’s main interest. He explores how and why individuals remember their personal story in a specific context; how memories build us up as human beings, and how important it is to have, and to recover, those memories for living. This focus lets him fill his plays with a comfortable melancholy that spectators always respond well to. Conejero writes with a classic style that he has refreshed.

Álvaro Tato usually writes comedies that are set in the Spanish Golden Age. Cervantes, Calderón de la Barca, and Lope de Vega are his inspiration, authors he knows so well that the Spanish Compañía Nacional de Teatro Clásico has commissioned him to write new adaptations for their audiences. He is also an actor, and his writing clearly facilitates actor performances. His plays are full of funny rhymes and comedic situations, and most are staged by Ron Lalá, an amazing theatre company. Tato’s comedies are extremely popular and appeal to a broad range of ages.

Antonio Rojano is a quantic author, which means that his writings take into account everything that is known about quantum physics. Time and space transform his stories into probabilistic situations where anything could change and could possibly be one thing and another at the same time. In addition, his writing techniques are so good that he can create different emotions, actions, and situations in differing times with smooth transitions. Moreover, his plays contain plenty of poetry, magic, and humor. Directors and actors want to stage his plays for all of these reasons.

Carolina África’s way of writing is classic in general terms. Middle-class women of any age and any sexual orientation who live in not particularly glamorous neighborhoods or villages are her main characters. Women who have ordinary lives and their relationships with their relatives and friends are the focus. These are people you would see shopping in the supermarkets or picnicking on beaches or in the countryside. Surprisingly, all the stories are not only interesting but also really moving. Audiences laugh and cry, and feel the kind of sadness that makes you happy after you experience it. She is probably the easiest playwright to understand, in any case. Her plays have been performed at the Cervantes Theatre in London and in Malabo, Equatorial Guinea, in addition to many cities in Spain.

Gon Ramos writes the most unclassifiable theatre of all the writers listed in this article. His stories and characters are familiar but their behavior is not. At the same time, the plots and storylines are so strange and mysterious that it is hard to know what he wants to say. However, his texts are so intriguing that they mesmerize audiences and provide good material that allows the performers to show how good they really are.

Iñigo Guardamino could be the weirdest of the authors included here. His intention is clearly political. He is a destroyer, with an iron fist in a velvet glove. Education, parenthood, democracy in Western countries, terrorism, love, sexual deviations, and lies are themes that populate his work, in which he also uses a sick sense of humor that has made him really popular. He is like a punk with a “kitsch” point of view who writes comedies.

Lucía Carballal is not interested in developing new forms of theatrical storytelling. She is more interested in plots and characters that are tainted with a contemporary surface. Her texts are mainly focused on a conflict between characters based on a secret, something that is difficult to be told or accepted, but has to be known. The missing piece of information is the key to understanding what is happening in the play: information that is not always really important but is relevant for the character’s wants or needs. Her dramas, always based on well-written texts, have a classic flavor such that if they were translated into English, would have premiered at the London National Theatre, West End, or New York before receiving roaring approval from global audiences (e.g.: La Resistencia).

Manuel Benito has chosen Eduardo de Filippo, the well-loved Italian playwright, as his role model. Consequently, he always writes smart and popular plays with social bias, plays that give him room to express his ideas about current hot topics. For example, Benito does this with the theme of immigrants in Un Cadáver Exquisito, a play based on the real history of the kidnapping of Charlie Chaplin’s dead body. He creates plays that remind people of the old traditional films, those hearty and poignant movies featuring good fighting evil, and people suffering the hard times that they have to in life.

Nando J. López is not interested in form, unlike many of the other authors on this list. He is more interested in content that usually focuses on love and sexual orientation at any age. His rich literary background helps him incorporate the best references when talking about those subjects or adaptations, as he has done for Desengaños Amorosos, his last play. In addition, he has written many plays for teenagers. He is really interested in young audiences because he was previously a high school teacher. In the last few years, he has been working with La Joven Compañía, a Spanish project dedicated to creating theatre for young audiences, which is performed by young actors.

Pablo Remón, apart from being a well-known playwright, is a renowned scriptwriter. His plays are very diverse in content. His focus ranges from the current political situation in Spain to love and its consequences in the modern world. His plays demonstrate his education as a scriptwriter in New York and his filmmaking background, although his plays are always theatrical. He never draws on film techniques in his productions, instead of trusting the performers over any other kind of theatrical resource.

Paco Bezerra is defined by his poetic approach to theatre. His texts are strongly based on his homeland, Andalusia, and the obscure dramas are usually inspired by the people who live there. From big landowners to workers and immigrants that work for them in poor conditions, he is more interested in how his characters feel. Bezerra focuses on what and whom they love or are prone to do, more than the harsh context in which they live. His conclusion is devastating. He shows that there is no room for individual mercy in real life, and that the theatre could be the place where the poorest could get their own voice (and a type of revenge) in non-inclusive societies.

Pilar G. Almansa does not have a defined style. She was trained as a performer in devised techniques in London but she changed her mind when she returned to Madrid. Then she decided to write and direct her own texts. In addition, she tried to incorporate technology into her plays until recently, when she decided to go back to the basics with her last two plays: Cama, the story of a couple from the time they met till they get divorced, and Mauthausen, a play about a Spanish person who was in the camp of the same name. Both plays are strongly based on text and what a performer can do on the stage to tell a story better without any technology or other kind of device.

Antonio Hernández is a Spanish theatre critic who graduated with honors in creative writing from Escuela Contemporánea de Humanidades (ECH), where he was part of a think tank for five years that focused on contemporary issues. Antonio contributes regularly to media such as HuffPost (Spanish edition), Actores&Actrices, SulPonticello, and Tragycom, a Spanish theatre ranking website. He is currently writing a series of interviews with women who work in theatre for Woman’s Soul magazine. Antonio has completed journalism courses in El País School and Escuela de Letras de Madrid and various theatre courses in many of the renowned theatres of Madrid.

“All Those Unnatural Bonds:” Talking Sexuality, Shame, And Female Friendship With Hannah Moscovitch