Fresh “Ham” at the Public 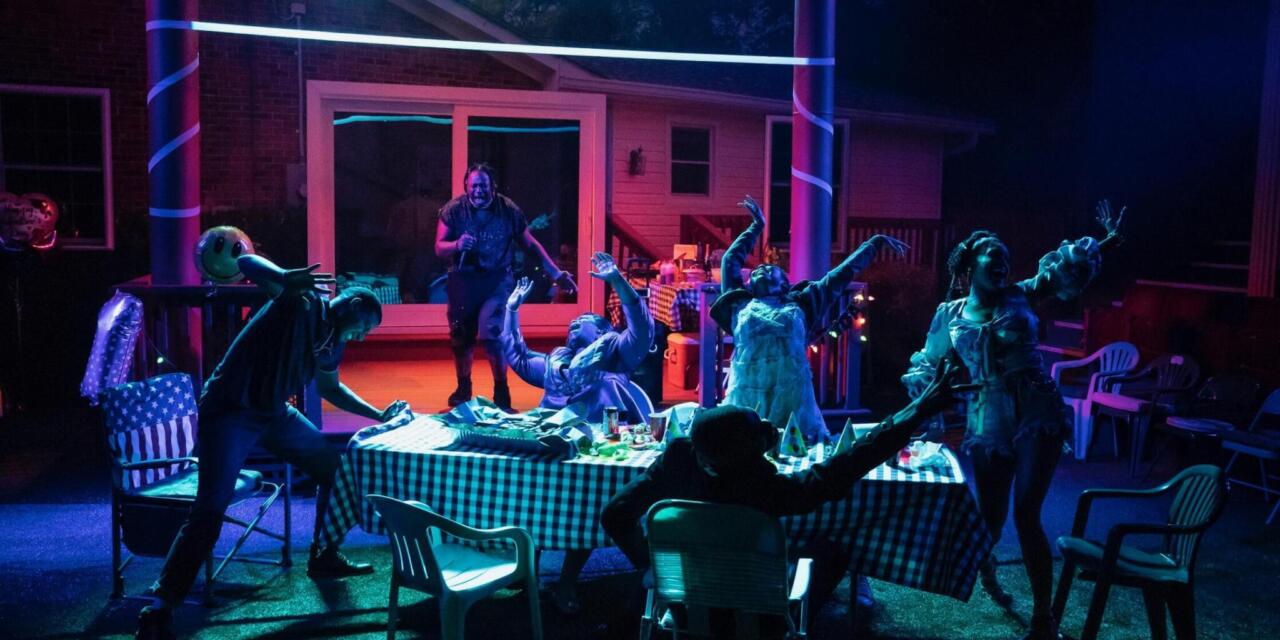 The cast of "Fat Ham" at the Public Theater. Photo by Joan Marcus.

Fat Ham arrives at the Public Theater for its first live production following the Zoom staging by Philadelphia’s Wilma Theater that earned it the 2022 Pulitzer Prize for Drama. The play’s in the realm of recent works such as A Doll’s House, Part 2 and Clybourne Park, literary responses to classic works. In the case of “Doll’s House” the provenance is on the tin; the latter is a sequel of sorts to A Raisin in the Sun. What distinguishes Fat Ham is its emboldened reimagining of Hamlet as a contemporary story that jettisons all but the skeletal core of Shakespeare’s play. Instead of a brooding young Danish prince in the late Middle Ages we have a lugubrious young African American Southerner in the present.

The parallels with the Bard are noted as a sort of mental checklist that seldom distracts from the vibrant work of playwright James Ijames. Fat Ham is wholly captivating on its own merits. Like A Doll’s House, Part 2, it swiftly transcends the familiar foundation of its origins to embrace theatrical conventions, only to jettison them in the service of reinvention. The Public’s production misses nary a step in serving up “Ham” as a glorious celebration of scrupulous writing, acting, and staging. Director Saheem Ali, an associate artistic director at the Public, nimbly pilots his mobile cast around the backyard barbeque set that is the milieu of much of the action. Ali is ably aided by choreographer Darrell Grand Moultrie and fight director Lisa Kopitsky.

The scenery by Maruti Evans, costumes by Dominique Fawn Hill and lighting design by Stacey Derosier are likewise meticulously in service to the production. The actors are remarkably on point as they navigate the hairpin turns from humor to pathos to fantasy and back again. Marcel Spears is the captivating locus as Juicy, Fat Ham’s modern-day Hamlet. He’s struggling with the murder of his father and the suspicion that his uncle, now stepfather, had a hand in that untimely death. In addition, there’s the matter of his own internal conflict about his emerging gay identity, one that manifests itself in the concept of “softness”, a recurring motif. Doing double duty as the brothers Rev and Pap is Billy Eugene Jones. With a talc-dusted wig and a swift costume change Jones dynamically conveys the nuances that distinguish his dual roles as Juicy’s uncle and the ghost of his father.

Among the evening’s chief pleasures is the tight, inventive script and similarly adroit pacing. There are several memorable scenes including those between Juicy and his friend Tio, played by Chris Herbie Holland. He’s Fat Ham’s Horatio. Tio is all youthful eccentricity, a stoner given to elaborate fantasies. There are also knowing conversations with Juicy’s cousin Opal, the hilarious Adriana Mitchell, the evening’s Ophelia. The name game continues with Gertrude as Tedra, played as a saucy sybarite by Nikki Crawford. The character gifted with the widest dramatic arc is the evening’s Laertes, nee Larry. He is Calvin Leon Smith, a commanding presence whose relationship with Juicy is the evening’s romantic centerpiece.

The family’s successful smoked meat business is the evident motivation for Pap’s apparent fratricide of Rev. There’s an abundance of humor that springs from topical details such as Juicy’s online college education at the University of Phoenix. A key plot point is the emergence of Opal and Larry navigating parallel journeys to Juicy of their sexual identity within the conservative confines of their Bible Belt families. These youngsters wring mordant humor and pathos from this generational conflict. Their parents, including Opal’s mother Rabby, played with obvious relish by Benja Kay Thomas, showcase the frenetic flip side of this youthful angst.

The setting may be a working class African American family but the themes of fighting against generational dysfunction and systemic oppression are salient and resonant. Juicy’s struggle is his motivation, yet he resists the temptation to violence that seems his destiny. It’s a conflict that Opal and Larry share, akin to the pacts that fortify siblings toward their parents. The play’s nuanced toggle between the broad humor of Rabby and Tio, the transcendence of Juicy and Larry’s turmoil, and the magic of occasional ghostly visitations by Rev is one of the evening’s chief pleasures and achievements. That the play ends not in a bloodbath but at a lavish disco is Ijames’ most audacious and triumphant moment. It’s the sort of surprise rendered by Fat Ham that is as jolting as it is rewarding.

Fat Ham has been extended for two weeks at The Public Theater, 425 Lafayette St., New York. 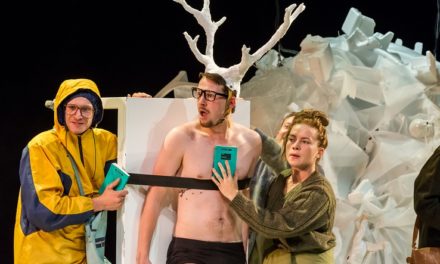