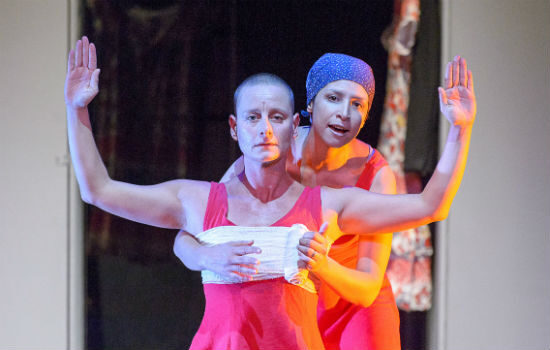 Ten out of 20 plays at this year’s Cairo International Festival for Contemporary and Experimental Theatre addressed women’s experiences.

Such was the focus on women’s issues and rights at the festival’s 24th edition, that Femi Osofisan, the Nigerian playwright, and critic who was honored at this year’s event, commented that: “This year’s edition is ultimately feminine.”

“It is important to distinguish between the various terms used to talk about women’s issues. ‘Female’ is a biological term, while ‘feminine’ is tied to the study of the genre, and ‘feminist’ is usually tied to politics,” festival director Sameh Mahran noted.

The focus on various different aspects of women’s lives was evident in a number of different Arab plays offered at this year’s festival, which ran from September 19-29.

The Egyptian play Women With No Tomorrow, performed by the Institute of Arts and directed by Syrian artist Nour Ghanem, addresses the problems of three Syrian women who meet in a refugee camp in Germany. Each of them reveals the problems she encountered in her native country prior to fleeing. The women’s tales denounce war, the patriarchal society, political regimes, and Daesh, among others.

The symbolic dance projected onto a screen at the beginning of the show seems alarming. The physical expression and gestures of the actresses on stage add to the aesthetics of the show. Despite their weak enunciation of classical Arabic and poor acting, the show presents some visually rich and appealing scenes. 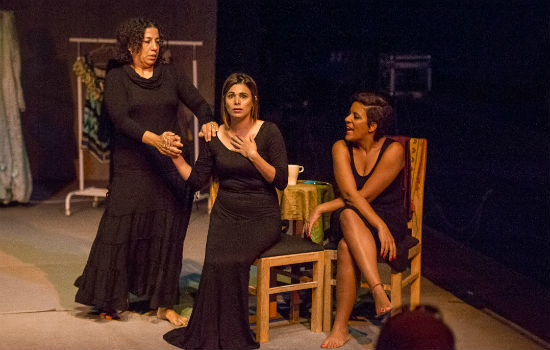 The Jordanian play Shadows of a Woman, directed by Eyad Shatanoui, addresses men and women’s relations in a conservative society which claims to be developed. Three women on stage carry suitcases while waiting for the train. Each of them tells us of her broken love story, deception, and tragic destiny.

Lighting plays a crucial role on this dark stage. The three women are dressed in red dresses, their suitcases filled with memories of the past. Despite its touching topic, the show gives an impression of déjà vu. 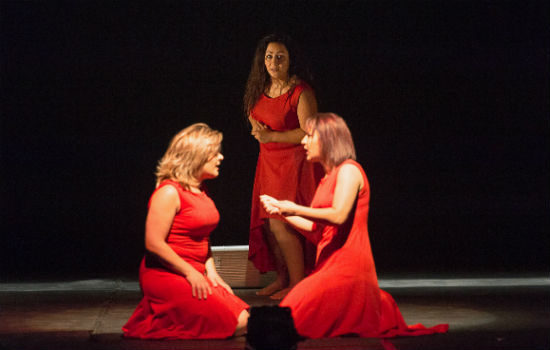 While many Arab plays address women’s issues through the lens of their relationships with men, the Moroccan production, Autumn, follows the story of a woman suffering from cancer. The heroine suffers from the effects of her illness, and from her husband’s departure.

The play, written by Fatma Houri and directed by Asmaa Houri, showcases a rather elaborate choreography, well-suited to the audience, in which the actress and the dancer on stage move together as one.

This division is a richly meaningful way of portraying the protagonist’s state of mind, conflicted between her illness and her feelings of deception after her husband’s departure. Is it simply the confrontation of a woman and man? Or is the topic more profound? Wouldn’t a man suffering from cancer, abandoned by his wife, face the same struggles? The topic this play tackles is far broader and has more philosophical weight than simply confrontation between men and women.

Also among the works dealing with aspects of the feminine experience were two plays influenced by poetry.

Women In Love And Resistance is a Tunisian play directed by Fathi Al Akary. The play is a dramatization, and a somewhat exaggerated one, of extracts of Faust de Goethe’s poems and of the writings of Tunisian intellectual and activist Choukri Beleid, who was assassinated in 2013.

The two female protagonists’ appearances, intonations, and characters change as they evoke and recite the works of Beleid, denouncing war, man, anger and injustice.

The French-Lebanese co-production Autumn Night, directed by Cerine Ashkar, also draws on poetry. A woman recites painful love poems in French; she speaks of suffering and feeling torn. An Arabic translation can be seen in the background, while two dancers perform a vivid choreography. 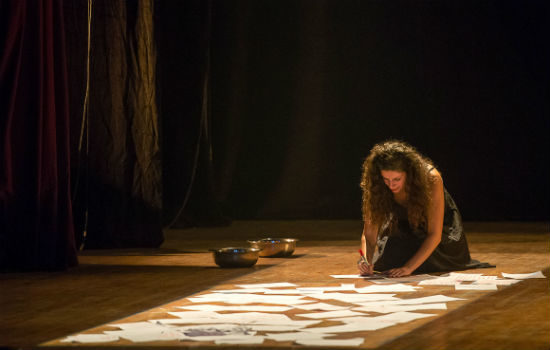 The Georgian Tbilsi troupe performed a version of Chekov’s The Three Sisters, directed by Konstantin Purtseladze, which constituted a true surprise for the audience and highlighted contemporary dancing. Through beautiful physical expression, the actor-dancers interpret the work, which tells the story of three sisters ravaged by solitude amidst a conservative society. The youngest sister, in search of freedom, falls in love with a soldier, who soon rejects her. Death, solitude, and abandonment hold the three sisters captive.

All is told through an original choreography, a well-studied scenography, and beautiful lighting. The visuals are minimalistic and greatly reliant on symbolism.

Russian troupe The Laboratory of Physical Theatre also use choreography to evoke man’s eternal race against time, in the play Wandering Time, directed by Lidia Kopina. In the play, women from a far-away world discover the Earth and encounter primitive man. A form of communication between these feminine creatures and nature is born. The show follows a slow and sophisticated rhythm. The women return to nature, from which they were born. 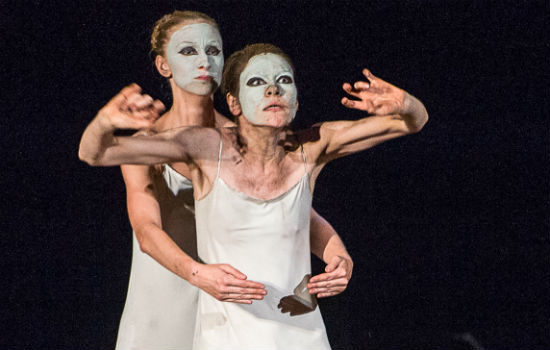 The play is based on real events which took place in the city of Colina and tells the story of a woman who was trapped in a chicken’s cage for twenty years. The heroine’s performance and physical expression are often brought to the height of agitation, at times confusing and exaggerated. The woman becomes a chicken, or rather an odd creature who adopts the movements and cries of a fowl, trapped in its cage. 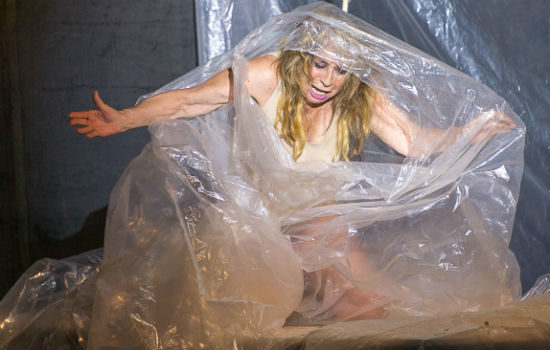 The Armenian show Flight Over The City, performed the Yerevan Puppet Theatre, was a surprising addition to the festival lineup. The play is directed by Narine Grigoryan and tells the story of a young girl who lost her sight and learns to use imagination, guided by her doctor.

In the first act, a love story is born between the young girl and her doctor, whom we never see, but whose voice we hear. He incites the young girl to use her imagination. The first act almost constitutes a monodrama, in which the actress uses colored strings on a black background to create her fictional world. She presses her body onto the background and flies, reflecting an imaginary voyage on top of the city.

In the second act, the girl regains her sight following a surgical operation. Yet her love for her doctor, now embedded in reality, starts to fade. She leaves the doctor, he cries over their love and returns to the stories and memories of the past. A video sequence is projected onto the background, showing the couple flying above the city. 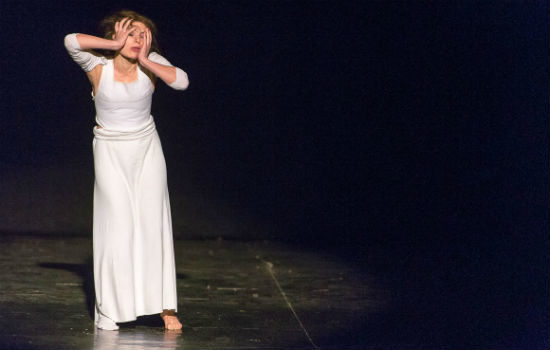 The festival also included two monodramas performed by women. The first was Kenyan play The Secret Lives Of Baba Segi’s Wives, directed by Mimouna Gallo, which addresses the topic of polygamy. The female protagonist’s performance is tinted with dark humor, as she portrays the influence of tradition and social prejudice on an infertile woman.

The second was the Chinese play Nine And A Half Love, directed by Meng Jinghui. The director blends theatrical performance with video projections. He uses montage to bring together the scenes which tell a story of love and revenge, one which evokes Homer’s epics, The Iliad and The Odyssey, as well as other universal works. The heroine brilliantly performs and interprets different characters on stage.

The show is situated in present-day China, a world of technology, of robots, reliant on artificial intelligence. Despite the vivid performance and the varied scenes, the show suffers from its excessive length and from a monologue which was poorly translated into English. 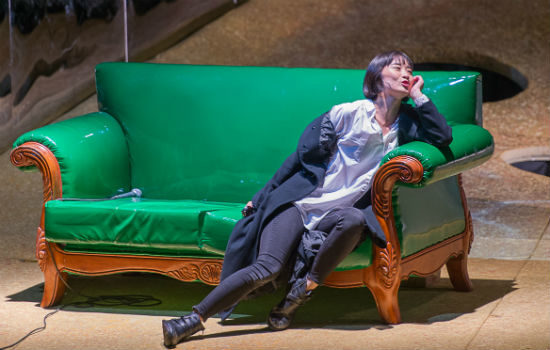 Nine And A Half Love, China (Photo: Bassam Al Zoghby)

In all of these plays, women, whether they be the protagonist, the playwright, or the director, are making their voices heard. They break away from political, sociological, or even genre-specific classifications, and assert themselves as human beings. After all, living in peace, and having rights and freedom, are all universal, human needs.

This article originally appeared on Ahram Online in October 2017.  It has been reposted with permission.