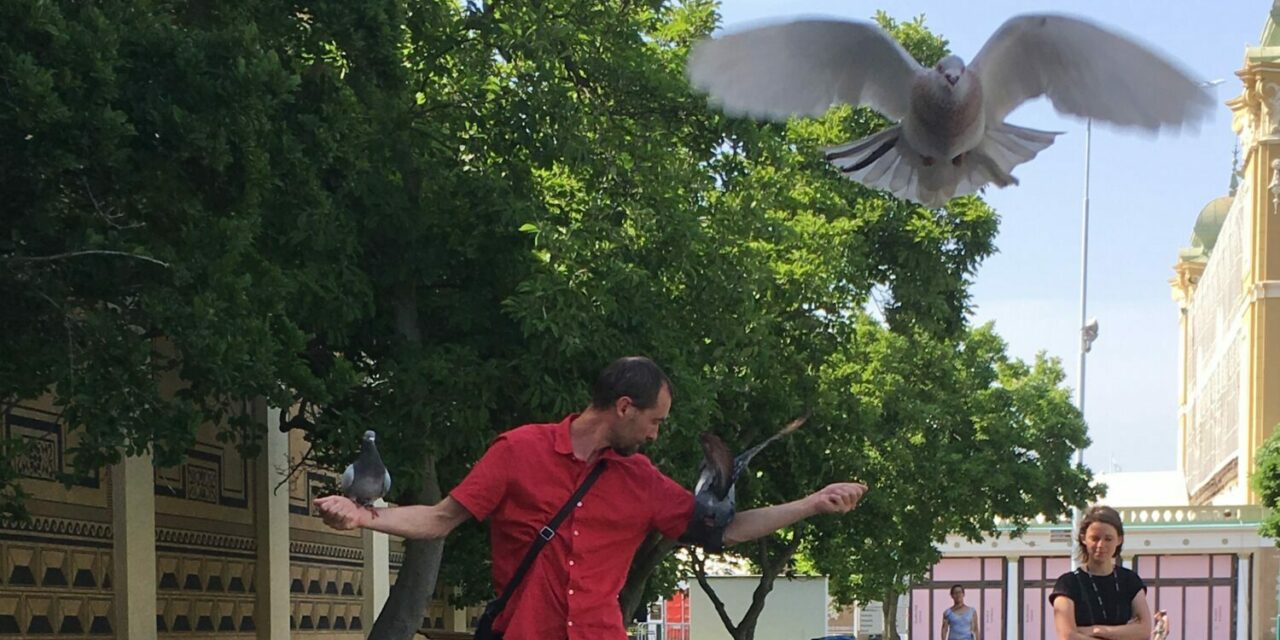 So. Let’s talk about pigeons.

Pigeons have the unfortunate quality of ubiquity. But it’s not just our familiarity with them that breeds contempt. It’s the perception that pigeons are disgusting. Disease-carrying. “Rats with wings,” as my and everyone else’s dad likes to say.

But what are they really? They’re highly adaptable birds that thrive wherever we do. You can find them practically everywhere in the world because human cities happen to be the perfect environment for these street fighters. (The podcast 99% Invisible has an excellent episode about this, that’s at the root of my Pigeon Appreciation Project.) Not all pigeons are the same, of course. There are different species with their own physical and behavioral characteristics. And sometimes, when they’re white, we like to associate them with hope and peace, and we call them doves.

The main plaza outside the Prague Exhibition Grounds is given over to performance artists, categorized in the Prague Quadrennial as “Formations.” When I arrived today, the first thing that caught my eye was a small stack of animal carriers, the size that a cat or small dog would go to the vet in. Being the kind of person who always looks inside curbside cardboard boxes for a litter of kittens, I was immediately intrigued. When I discovered that they contained pigeons and that milling around the pigeons were cool-looking musicians dressed in all black, I was in.

The ensemble was Cairn, from Paris: two flutists and a bass clarinetist. The pigeons and their two handlers, who wore bright red polos over black pants, were from the French town of Poitier.  Nearby was the composer/mastermind, Robin Meier. The show was “Song for Ghost Travelers.” It piece had originally been conceived for the Paris train station in 2015 and reworked for the PQ. As I planted in a bench dead-center of the action, Meier told me that the pigeons have small flutes strapped to their back, and when they’re released, they play. 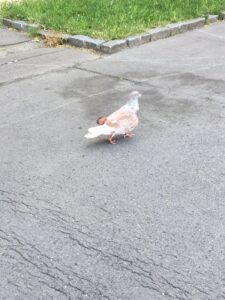 A star is born. Photo by Abigail Weil.

The performance was brief and magical. The musicians played the music that was atonal and dissonant, but ambient. The flutes had a high whistle, the bass clarinet, a low, spooky rumble. One by one, the pigeons were released from their cages. They waddled out, looking as portly and dignified as old Jewish men coming out of the schvitz. Then they started flying, just the distance between the two handlers. They would congregate at their feet, or land on their shoulders and outstretched arms. The flutes on their backs were very subtle. They weren’t long and reed-like as I expected. They were small brown boxes. They looked like tefillin.

It’s amazing how quickly your perspective can change. These pigeons were stars, and the crowd responded to them as such. After we saw how they flocked to their handlers, spectators started extending their arms, hoping for one of these “rats with wings” to land on them. Children were transfixed, of course. One chubby little boy passing through with his mom on their way to the tram became so entranced, when he looked up and realized she had kept walking and was now far away (in the three-year-old distance), he put his head down and shoulders forward and ran very seriously after her. Another little boy kept his eyes peeled on the pigeons while his mom stood him up and changed his diaper. 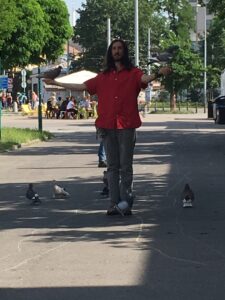 And the festival kept happening all around us. Women with long bamboo staffs affixed with chalk drew yellow and pink lines around the performers and spectators. We all thought it was part of the show, but it was another work happening simultaneously. Ditto the tall young dude who kept shout-counting backward from ten. But in this little world, if you leaned in and listened very carefully, you could hear the oscillating whistle of the pigeons’ flutes as they flew through the air. They cooed and with small birdsong, formed a choir.

As the pigeons made their way back to their cages, the music died down. I don’t know why the caged bird sings, but these little stars had performed quite enough. The handlers lovingly draped dark cloths over their cages, and the show came to an end.

Sometimes during the show, the handlers would make a mysterious hand gesture, similar to rubbing your thumb and middle finger together to signify big money. After they did this gesture, the pigeons would sometimes fly from one handler to another. I couldn’t tell if they were communicating with each other or the birds, so after the show was over, I asked. The birds, he said, showing me the pigeon feed he kept in his hand. The gesture, he said, was pointing out the food, reminding them that it was there, not because they needed it, but to instill in them confidence, to communicate that they were cared for. Slowly, thoughtfully, in that ravishing French accent, he said, “It’s not talking to them. It’s listening.”