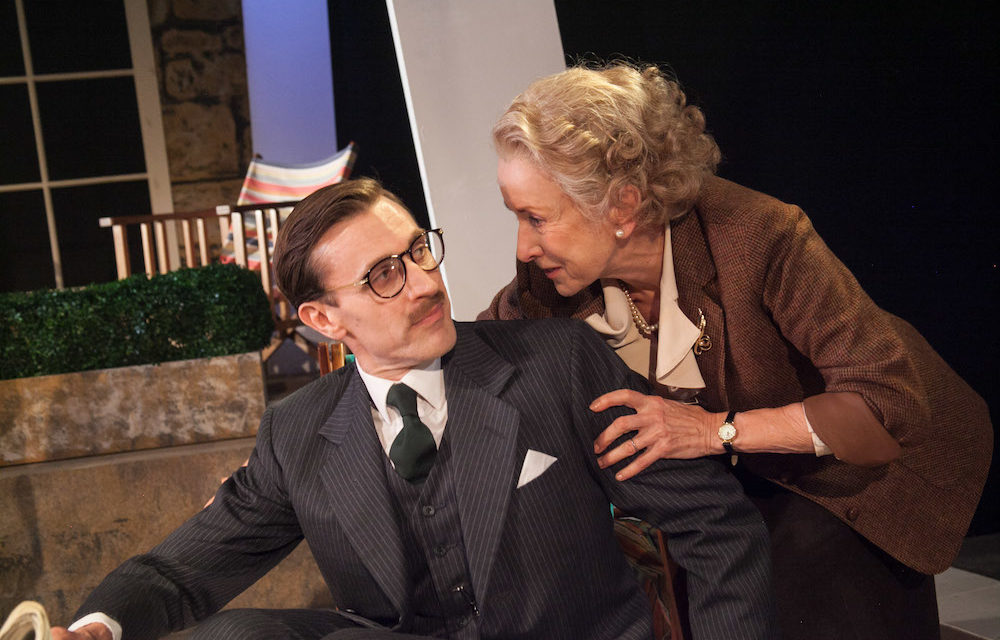 John Sackville as Julian Anson and Susan Tracy as Laura Anson in "A Day By The Sea" by NC Hunter - Southwark Playhouse, Photo Credit: Phil Gammon

Some plays would now be completely forgotten if not for a scandal that makes them memorable. NC Hunter’s A Day By The Sea, first staged in 1953, is a good example. Today, its name is chiefly remembered because it was the play John Gielgud was rehearsing when he was arrested for cottaging at a time when homosexual acts were illegal. The scandal of his being fined for “persistently importuning men for immoral purposes,” a crime against the social mores of the 1950s, led to fears that his career would be over. As it happened, he was vilified, received hate mail, was refused a visa for the United States — and a petition demanded his resignation from Equity.

Hounded by the press, which also demanded that Gielgud be stripped of his knighthood, what saved him was the generosity of theatre folk — and of the general public. At the first rehearsal after his arrest, fellow actor Dame Sybil Thorndike broke the awkward silence by saying, “Oh, John, darling, you have been a silly bugger.” Then, at a preview of A Day By The Sea, while he hesitated in the wings, afraid to go on stage, she fetched him with the imperious remark: “Come on, John darling, they won’t boo me.” In fact, audiences gave Gielgud a standing ovation. The great British public is often more forgiving than the tabloids sometimes assume.

A Day By The Sea is set in Dorset, May 1953. Julian Anson, a 40-year-old workaholic diplomat based in Paris, is visiting his mother’s country house. Mrs. Anson is a widow who lives with David, her elderly brother-in-law, along with Doctor Farley, who is meant to look after him but spends most of his time drunk, and she has also invited Frances Farrar, her adopted daughter, and Julian’s childhood friend, to stay. Frances has recently been divorced from her second husband, a much younger man who tried to kill himself, and an air of scandal surrounds her. In tow are her two children from her first marriage, and their Scottish governess Miss Mathieson.

At first, Julian comes across as a right prig. A Foreign Office diplomat who, he thinks, has not realized his youthful potential (he’s only a First Secretary in Paris) he glows with a sense of entitlement, patronizing, repressed and ill-tempered. He snubs and then criticizes Frances for being somehow immoral and tainted with scandal because her name has come up in the court case following her second husband’s suicide attempt. But he soon gets his comeuppance when, in Act Two, Mrs. Anson organizes a family picnic on a nearby beach, and Julian has a quiet chat with another visitor, Humphrey, a Foreign Office official, who has some shocking news. He tells Julian that he is being recalled to London. Apparently, he works too hard and has no people skills. Bye, bye Paris.

Julian confronts this disaster, and his mother’s persistent advice to get married, with his usual lack of emotional intelligence. His eye turns towards Frances, his childhood friend, but he still has a lot to learn about love. As you’d expect from Hunter, who was dubbed the English Chekhov, this takes place amid a lot of family cross currents. While ancient David Anson grumbles about Doctor Farley, the latter sneaks off to the pub with William Gregson, a local solicitor, uninterested in the fact that Miss Mathieson has fallen in love with him. As the children play happily on the beach, old Mrs. Anson tries to hold everything together.

Frances makes a good contrast to Julian. She has a cool understanding of her own emotions and a good knowledge of the absurdities of masculine romantic feelings. But, like all of the characters, and of course their author, she is trapped in the old world. She accepts the values and morals of respectable society: she feels shame and guilt about her love life. Like Julian, she accepts self-sacrifice, restraint, and repression. And, in fact, so does Miss Mathieson. Although Hunter, like Terence Rattigan, does question this moral code, showing how it destroys human happiness, in the end, the code wins and the humans lose out.

In the last act, Hunter does give Julian a moment of foresight. He says that the future belongs with “the young ones”. It is a potent phrase and a reminder that, just three years later, the future youth rebellion arrived with John Osborne’s Look Back In Anger. Reviewing the original production of Hunter’s play, Kenneth Tynan (who would later support Osborne) attacked it, saying that it was “an evening of unexampled triviality.” He was completely wrong: Hunter is a subtle and careful playwright, with a knack for quiet, but profound, understatement. But Tynan was right in that the playwright was of the old school, and not of the new. And British theatre loves the new. Hunter’s reputation plummeted with the arrival of the Angry Young Men.

Today, Hunter’s play has several things going for it. It is well written and deeply felt, although Julian’s sudden conversion from unbearable snob to real human being is a bit quick to be entirely convincing. It provides a hidden, and accidental, commentary on the Gielgud affair, as when the Doctor says that we all take risks, but some of us are lucky (Gielgud wasn’t). And it offers powerful statements about the price of self-sacrifice (Julian has given his all for his country, and received little thanks) and the murderous nature of humankind in the pessimistic postwar years: at one point, the Doctor describes nations at war as “a pack of wolves.” His fear of the masses contrasts with Julian’s idealistic invocation of an “age of tranquillity.”

A Day By The Sea is a very long play, and unfortunately Tricia Thorn’s production, for Two’s Company and designed by Alex Marker, fails to find a subtle enough tone for the piece. The writing requires exceptionally careful shifts of emotion and Thorn’s actors are in general too declamatory and histrionic, drowning out the finer feelings of the piece. Susan Tracy, as Mrs. Anson, and David Acton, as the Doctor, are too melodramatic, although John Sackville (Julian) and Alix Dunmore (Frances) are okay. Despite this, the play is a fascinating example of early 1950s West End playwriting before the seismic shift brought about by the Angry Young Men, and it’s a solid account of shame, guilt, and self-sacrifice in the old world.

A Day By The Sea is at the Southwark Playhouse until 28 October.

This post originally appeared in Aleks Sierz on October 7, 2017 and has been reposted with permission. 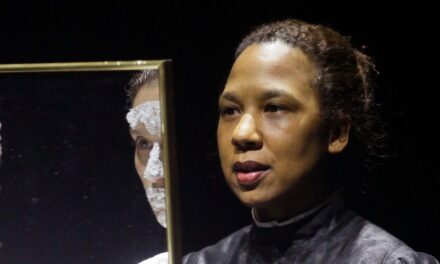 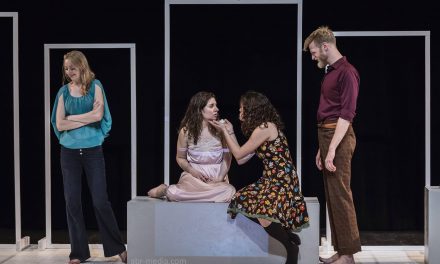