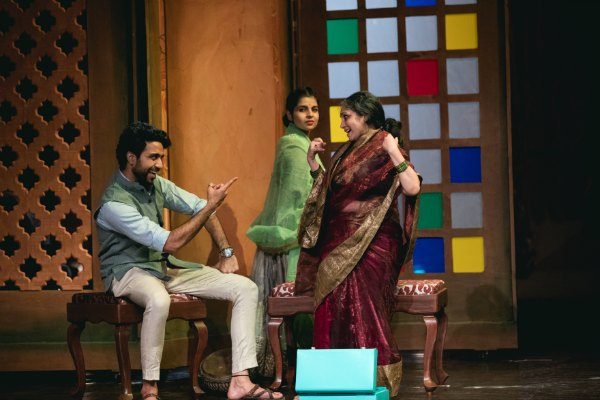 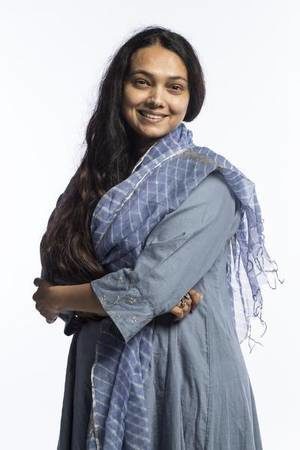 Playwright Purva Naresh has a prolific year ahead, starting with the premiere of Bandish 20-20000 Hz.

At its most literal, the title of a new musical drama written and directed by Purva Naresh, alludes to the frequencies that delimit the absolute range of human hearing, but what we actually hear, especially in the context of a musical recital, depends upon the milieu of performance and the conditioning of our souls. Even though Bandish 20-20000 Hz is billed as the first proscenium production of Aadyam’s new season, it is an intimate chamber piece at heart, that juxtaposes the filigree of a classical baithak with the robust earthiness of nautanki, via a pair of endearingly irascible doyennes (Anubha Fatehpuria and Nivedita Bhargava), who carve out common ground even from what may appear to be an irreconcilable dissonance of sensibilities. As we frequently encounter in Naresh’s plays, the women are quick-witted raconteurs who carry with them histories and traditions, and accounts of lives lived and loves lost.

What some aficionados may welcome is the return of two universally-loved characters, the one-time court singer Beni Bai (Bhargava) and her faithful retainer, Munnu (played by the ubiquitous Danish Hussain), who have populated Naresh’s plays like Afsaneh – Bai se Bioscope Tak and Aaj Rang Hai. Beni is, of course, a fictionalized stand-in for Naresh’s maternal grandmother, a formidable influence in her life. “The stories have changed, but they imbibe the philosophy and feel of the life she led. I have borrowed anecdotes rather than using biographical details,” says Naresh.

In the ten odd years, she has lived with these characters (Afsaneh, directed by Akarsh Khurana, hit the stage in 2008), Naresh has become quite objective about Beni’s persona, once a didactic presence placed on a pedestal, but now much more human, and therefore more fallible. Although no character in Bandish 20-20000 Hz can be considered to be a surrogate for the playwright herself, the texture of the play is suffused with introspection about her own life, as she looks back at an innocent time while confronting the fears and uncertainties that appear to perennially beset creative individuals. The play’s nostalgic tapestry is thus filled out with ideas of immense complexity.

This is Naresh’s second outing with Aadyam, after last year’s critical misfire, Ladies Sangeet, which was nonetheless a crowd-pleaser that showcased the resplendent theatrical elements that are a hallmark of her productions, dubbed ‘total theatre’ by Aadyam artistic director, Divya Bhatia. As others have attested, the platform provides directors an expansive production schedule and a monumental slate that allows for an ambition of vision that can elevate a play considerably, while also raising expectations. “Each time you create something, you wonder if you are able to say what you want, or do you end up saying something else, or are you open to interpretations in ways you don’t want to be. These are the fears of the storyteller,” says Naresh.

Ultimately, Bandish 20-20000 Hz, with its interior worlds and intimate conversations, represents an opportunity to marry Naresh’s innate preoccupations with the trappings of a ‘large’ production housed in a big venue like the Jamshed Bhabha theatre.

The year has marked a prolific season for Naresh as a playwright in demand. Apart from her Aadyam venture, she has written her first full-length commissioned works for international groups. Earlier this month, the Australia-based Bakehouse Theatre opened Jatinga, written by Naresh and directed by Suzanne Miller, at an intimate local venue in Sydney. It is slated for an Indian premiere at the NCPA’s Centrestage Festival in November. “The starting points for the play were equally compelling and bizarre. Suzanne was inspired by Maya Angelou’s poem, ‘Caged Bird’. Then, images emerged from a workshop with actors, including a train, a 500-year-old woman and a girl with a packed bag ready to embark on a journey. These were elements that I was asked to weave into an original narrative about girls and freedom,” says Naresh.

Researching for the play took her on a pan-Indian journey rife with chance encounters, and the rich tapestry of the manuscript that emerged was taken up by Miller and her actors to create a movement-based devised piece. The title itself refers to a site in Assam, where birds come migrating to its cliffs and mysteriously plunge to their deaths. Used to helming her own projects in India, Jatinga brought Naresh out of her comfort zone and put her in touch with an unusual theatre-making sensibility with its own cross-cultural intersections and aesthetics. She was present during the initial process in November last year. “Suzanne initially didn’t even want to translate the Hindi manuscript, because she wanted her actors, drawn from the Indian diaspora in Sydney, to relate meanings with their bodies and gestures,” says Naresh. Later, Miller did read an English translation Naresh provided, acquainting herself with the playwright’s vision even if the production bears her own indelible stamp.

Then, in September, the British production, Pink Sari Revolution, adapted by Naresh from Amana Fontanella-Khan’s book on Sampat Pal, the formidable leader of India’s Gulabi Gang, will open at Leicester’s Curve Theatre. Directed by Suba Das, who had earlier helmed a production of Naresh’s Writers’ Bloc play, Ok Tata Bye Bye, at the same venue, the project has been made possible by a grant from the Arts Council UK, to commemorate 70 years of Indian independence. “The book is a factual but sanitized account of Sampat’s life, so it did present a challenge to create a dramatic adaptation with a built-in counterpoint,” says Naresh, “It was very important for both Suba and me to bring our own politics to the play and not create a worship piece.”

Although much lauded for her activism, and her protracted campaign against social injustice with an organized women’s movement, Pal is a double-edged persona who has fielded allegations of financial impropriety and has had a misguided stint on Indian reality TV. Naresh found herself questioning the violent brand of resistance that is an important facet of the Gulabi Gang movement, but after several conversations with Pal, she says, “No matter how much we analyse her, and not approve of her, her bravery as an individual cannot be denied.” That in itself makes her a worthy paragon. The dates for the play’s Indian run have yet to be announced.

Bandish 20-20000 Hz will be staged at Jamshed Bhabha Theatre, NCPA, Nariman Point today and tomorrow and at St Andrews Auditorium, Bandra on July 29 and 30

This article was first published on The Hindu on June 16th 2017. Reposted with permission. Read the original article here.