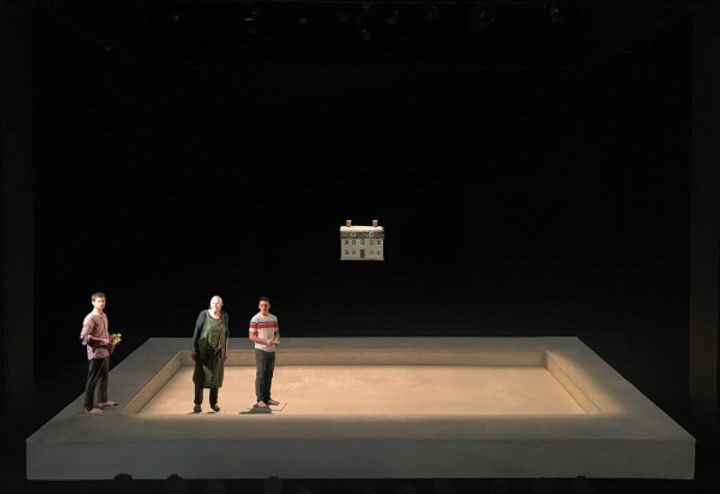 An oddity of this theatrical season to ponder as we bid farewell to 2019:

The two plays are very different. Matthew Lopez’s The Inheritance, directed by Stephen Daldry on Broadway, is a seven-hour, two-part, densely talkative epic about generational continuity and indebtedness among gay American men. Sing Street is a 2 ½-hour musical directed by Rebecca Taichman at New York Theatre Workshop, about a high school band in recession-strapped 1980s Ireland. It’s adapted from a 2016 film and has a book by Enda Walsh and music and lyrics by Gary Clark and John Carney.

Crowley’s toy houses serve very different functions in these two plays. The one in The Inheritance, not seen until about halfway through, is a wide New England saltbox that floats upstage in darkness, eerily isolated with illuminated windows. It’s a dreamlike vision of idyllic sanctuary, a miniature of the upstate New York home that one of the play’s characters turned into a hospice for dying gay men at the height of the 1980s AIDS crisis. Late in the action, this model slides forward and opens, revealing warm-looking rooms with tiny animated figures. The moment reads as a miraculous transformation: architectural Puritanism suddenly shocked into openness by the compassionate people who seized possession of the cold, rigid and rectilinear structure. The model house in Sing Street, by contrast, is only there for the preshow and opening moments, a homely presence in plain white light. It’s a charming old steep-roofed, brick townhouse that splits open at the first blast of guitar chords, revealing a young actor (Gus Halper) crouching behind it and an amazingly detailed interior that includes a tiny-poster-and-banner-emblazoned boy’s room. This model never returns, we presume, chiefly because the family whose home it signifies disintegrates during the play; thus, the rupture we saw at the outset is permanent. Furthermore, that private rupture is meant to signal a larger social one: the two band leaders hightail it to London at the end, demonstrating that 1980s Ireland is sadly losing its best and brightest to desperate emigration.

Here’s the thing: model houses are never simply fun decoration in serious plays, which both these works aspire to be. Their aura of surreality and uncanniness—which keeps us from looking away from them, all the stronger when their craftsmanship is as fine as Crowley’s—invariably makes us read them as part of the plays’ social critiques. That’s a great design opportunity but it’s also a risk: the plays have to deliver the social-critical goods or the models look too much like extravagant toys and flashy compensations. Personally, I have strong doubts about the claims to sweeping historical statements in both these shows. That’s the main reason why Crowley’s models stand apart in them for me.

It would be a New Year’s treat to hear from readers who disagree with me and see this model question differently. What do you think?

This article was originally posted at https://www.jonathankalb.com/  on December 24th, 2019 and has been reposted with permission. To read the original article, click here.