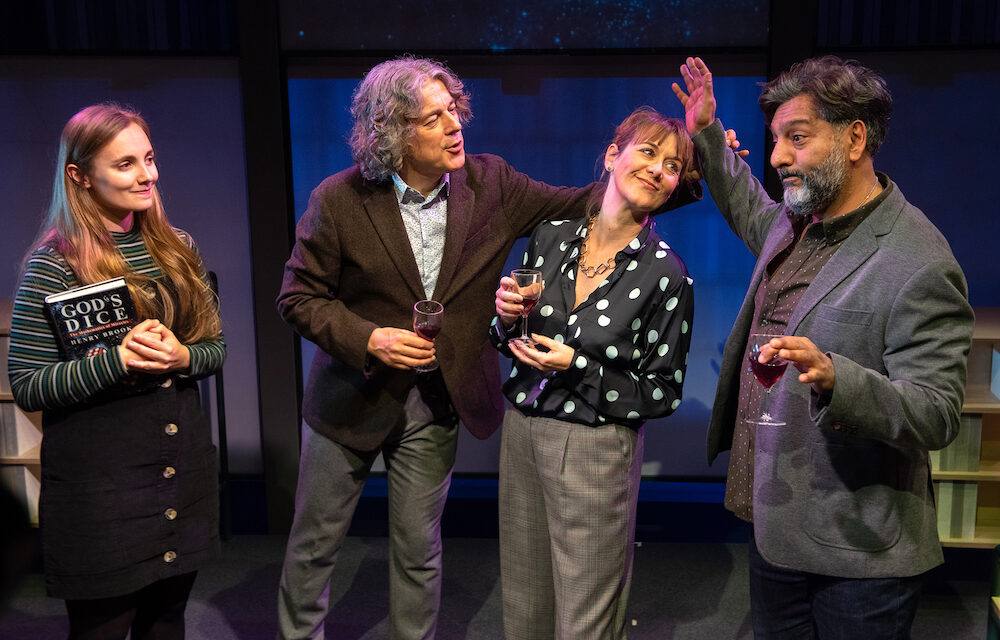 One of the great cultural divides is that between religion and science. Of course, as novels such as Philip Pullman’s His Dark Materials trilogy amply prove, it’s easier to speculate about this gap in fiction than in fact. Either way, the tension between belief and proof make for good drama, and this lies at the heart of comedian, novelist and television personality David Baddiel’s new piece, a science play which is co-produced by Soho Theatre and Avalon. But, like so many plays about ideas, can this one shake off the temptation to be too cerebral?

The set up is promising: Henry Brook (played by celebrity stand-up comedian Alan Davies) is a middle-aged physics lecturer who is married to Virginia, a much more successful writer whose speciality is books that deny the existence of God. The equilibrium of their relationship is disturbed when Edie, one of Henry’s students, not only tells him that she is a Christian, but also suggests that believing in quantum physics is just as leftfield as a belief in a deity. As they talk, Henry become attracted to the idea that the miracles in the Bible could be explained by mathematical equations.

Within weeks Henry and Edie embark on the project of writing a book, God’s Dice (the reference is to Albert Einstein’s remark that “God does not play dice”), which provides speculative scientific proofs that miracles can happen. Suspecting her husband of having a mid-life crisis, Virginia is appalled and enlists the help of Tim, a computer scientist and family friend, to find out what Edie is really up to. Meanwhile, once the book is published, it suddenly takes off, making Henry a celebrity and enabling the creation of a religious cult dedicated to popularizing the idea that science proves the truth of Christianity.

Initially, the play roars into action as Henry delivers a lecture about the probability of winning the lottery in a multiverse of limitless opportunities. Ideas zing across the stage; it’s so stimulating. So enthralling. Then comes a scientific proof, complete with a dazzlingly flourish of equations, that Christ really could turn water into wine. Yes, amazing. But, like so many science plays that don’t have the genius of a Tom Stoppard or a Michael Frayn behind the pen, a certain pedestrian plot development soon sets in. While many of the ideas remain intriguing and worth thinking about the central premise is soon diluted and the action begins to plod.

The problem is that while God’s Dice often appeals to the imagination it never really grips the guts. Even the addition of marital arguments, inappropriate teacher-student relations, explosions of social media aggression and some good jokes about cults can’t save a play which seems to lack a convincing inner dynamic. Towards the end, and despite the laughs, the whole exercise begins to feel heartless and mechanical. Although the playtext contains an Introduction by Baddiel, in which he locates the inspiration behind his play in his tense relationship with his father, a scientist who scorned the arts as “a waste of a brain”, this emotional fuel soon gets dissipated.

Equally troubling is the work’s kind tolerance towards middle-aged masculine fantasies and its apparent endorsement of its fictional thesis. Like many other mildly right-wing plays, more common than ever on the London stage, the liberals here are shown in retreat, and the forces of demented belief, spurred on by populist social media, are in the ascendancy. While it may be a political tactic to show the power of one’s enemies, their triumphant victory seems neither necessary nor convincing. And, like so many writers who are also comedians, Baddiel has an irritating habit of running towards punchlines. Some of the jokes are great, but the constant need to finish dialogues on a one-liner soon gets tedious.

James Grieve’s production has some good moments, but begins to slow down in its second half. While Alan Davies is characteristically scatty and charmingly bewildered, with a flickering smile and knowing eye, his stage persona is more matey than mesmerizing. At the same time, Leila Mimmack’s Edie seems a bit underpowered, holding back too much until the final scene, although Alexandra Gilbreath (Virginia) and Nitin Ganatra (Tim) are both excellent. So while the references to Schrödinger’s Cat and infinite universes does have a certain appeal, the piece’s ideas are so much bigger than its human component.

God’s Dice is at Soho Theatre until November 30.