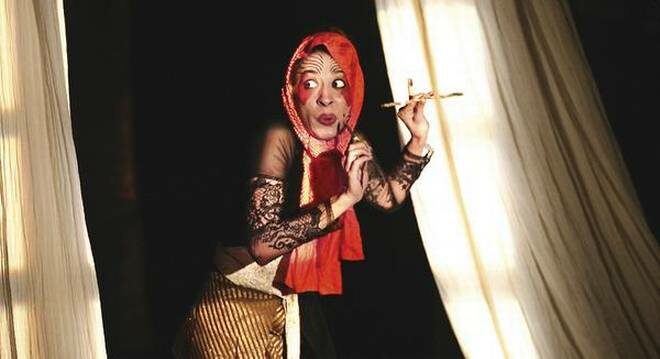 Different fare Sabrina Arusam’s puppets; Stills from the play "Elephant in the Room and Catch That Crocodile."

The 10th edition of the Hyderabad Children’s Theatre Festival starts off with gusto.

“I am exhausted and running,” says theatre personality Vaishali Bisht of Hyderabad Children’s Theatre Festival (HCTF). With the 10th anniversary celebrations set to take-off from December 7, she is excited and laughs, “I feel old; we have grown up with the festival.” A decade is a long time and the team is celebrating it in style. “It’s our 10th year, why not have a 10-day celebration?” adds Vaishali who’s done a few alterations in the format of the festival.

Since its launch, HCTF was a three-day festival held at Shilpakala Vedika. The change began two years ago with their ancillary events being held at a different date. This year, the 10-day theatrebuzz is at a new venue — Marri Chenna Reddy HRD Institute in Jubilee Hills. Vaishali observes a smaller auditorium will give theatre lovers an intimate feel and direct contact which they experienced during their curtain-raiser, a Norwegian interactive play.

Besides performances, this edition’s events will have workshops for children, educators, and theatre professionals. Puppetry workshops come with a combination of technique and emotions; glove puppets for children, rod and traditional koya bommalata for teenagers–who can also explore a set design session with recycled material by Dhanendra Kawade (Swangvale Productions, Balaghat). A few workshops for educators will focus on using drama and theatre in dealing with children and how can one creatively think about changing narratives. A significant production for the five-year-olds is Nal Jal — exploring the relationship we have with water. A still from Catch That Crocodile.

A non-verbal play, it highlights the different sounds of water. Theatre professionals wanting to hone their skills in production design can look forward to sessions on lighting workshops and design by none other than the renowned theatre group Surabhi. Vishali explains, “We have seen numerous theatre workshops happening in the city but not workshops which talk about lighting and design.” She is glad the theatre scene is changing with enthusiasts interested in lighting and set design. “Earlier lighting meant just switching lights on and off without any innovation. Even sets would be a typical drawing or living room kind of set. Now there is renewed interest in stage design and we need to enhance it.” A still from Catch That Crocodile.

While the school shows in the festival have been houseful till now, Vaishali is disappointed theatre has not yet touched one segment of people. And they are? “The parents,” she quips. “We do not know if the logistics of coming to theatre is too much that they do not step up and invest in their children; I have newspaper articles which says today’s education system is not turning out employable people. There is a need for communication, empathy, and skills which is going to be valued in the future.”

Being an ‘eternal optimist’ she hopes theatre scene will enhance further.

The 10th edition of Hyderabad Children’s Theatre Festival was held from December 7 at MCR HRD Institute in Jubilee Hills.

This article was originally posted at thehindu.com  on December 6th, 2019 and has been reposted with permission. To read the original article, click here.