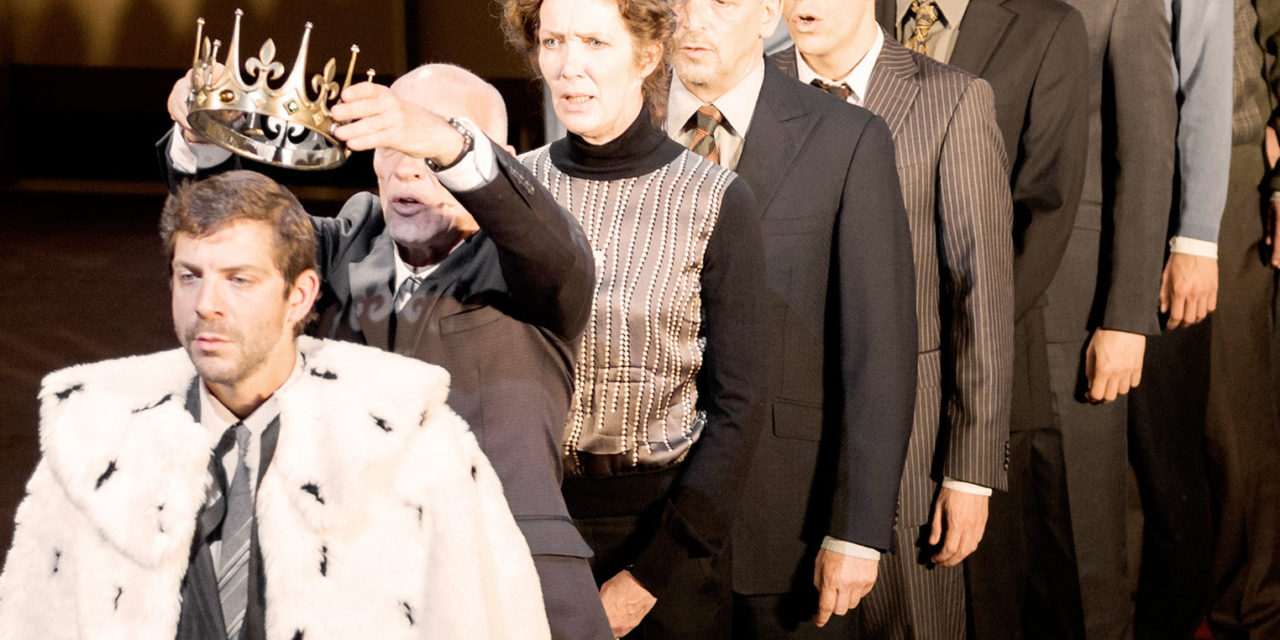 The Brooklyn Academy of Music (BAM) has been the site of many creative adaptations of Shakespeare’s plays. The latest, Ivo van Hove’s Kings of War, which ran at BAM from Nov. 3 to 6, is a multimedia mashup of characters, lines and scenes from Shakespeare’s history plays.

“Extensively cut,” “deeply cut,” and “severely cut” are some of the favorite phrases used by the reviewers of these types of experimental stage and film adaptations. Ben Brantley, in his New York Times review of Kings of War, observes that Van Hove and his adapters have decided “to strip the texts down to their political marrow.”

The implication is that deleting lines – not to mention deleting entire scenes and characters – is an act of cultural vandalism. It recalls Velázquez’s Rokeby Venus, slashed with a chopping knife by suffragette Mary Richardson in 1914, and Rembrandt’s The Night Watch, attacked three times during the 20th century, twice with knives.

Cutting, however, doesn’t necessarily mean getting rid of something. It could mean prizing something so much that you want to cut it out and save it, perhaps putting it to creative use in something you’re making yourself. A “cut,” in this sense, could be a speech that you’re using for an audition or a scene you’re reworking in a short story or a character you’ve decided to make the subject of a painting. Cuts cut both ways. What has been cut out can be discarded on the cutting-room floor or it can be made the centerpiece of something new.

In such cases, cutting up Shakespeare is not an act of destruction but an act of creation. Professional playwrights in Shakespeare’s time even thought about creating scripts as “cutwork,” like constructing costumes by cutting and stitching. When playwrights collaborated on a script, each writer got separate pieces, in the form of separate scenes. Shakespeare participated in several such joint-author enterprises in the course of his career, and an argument has been made recently that Christopher Marlowe was one of his collaborators.

In the four centuries since Shakespeare’s death, artists in all kinds of media have carried out creative cutwork of their own.

Decades before the types of cutwork we’re seeing today, beat writer William S. Burroughs and his friend Brion Guysin wielded pairs of scissors, cut up Shakespeare’s texts and rearranged them into verbal collages alongside cuts from other writers.

Particularly fruitful, they discovered, were cuttings that juxtaposed fragments of Shakespeare’s sonnets with fragments of Arthur Rimbaud’s poems. The effect, they said, was the creation of “a third mind.” I came across these examples in the Berg Collection in the New York Public Library, and they’re published, for the first time, in my recent book Shakespeare | Cut.

But creative cuts have actually been taking place since the 1590s, when readers came into possession of Shakespeare’s plays in their earliest print editions. In diaries and so-called “commonplace books,” these early readers transcribed the phrases, sentences, and speeches that they found to be particularly striking. Cuts of a different sort were inserted by printers on title pages: woodcuts and engravings showing particular characters (often depicted, cartoon-like, with banderoles coming out of their mouths) and particular scenes.

Cuts of characters and scenes were joined by author cuts, beginning with the engraved portrait of William Shakespeare on the title page of the 1623 First Folio.

Yet another variety of cuts came to the fore in the 18th century, when cuts of the actors playing certain characters emerged in paintings and engravings. Successive forms of new media – lithography, photography, sound recording, video – have brought actor cuts, in particular, to the forefront in public consciousness of Shakespeare. Think of David Tennant’s Hamlet, Judi Dench’s Cleopatra, Laurence Fishburne’s Othello, or Michael Fassbender’s Macbeth.

Why cuts? Why now?

Today, Shakespeare cutwork takes place on stage, in film, in installations, and online. Van Hove’s Kings of War, with its video monitors giving access to hidden spaces, mirror close-ups, and news conferences, exemplifies how media can converge in contemporary cutwork.

The cutwork in Annie Dorsen’s A Piece of Work, an adaptation of Hamlet that ran at BAM in 2013, was even more radical than Van Hove’s work. Each performance of Dorsen’s Hamlet was different, thanks to computer algorithms that generated entirely new combinations of words, visuals, lighting, and music over the course of five “parts” corresponding to Shakespeare’s five acts. The algorithm shifted from one part to the next. And from one performance to the next.

The resulting cuts – including speech prefixes and stage directions – were projected on a large screen. Only in Part Four/Act Four did a live actor come up from the audience to speak a soliloquy that was being created then and there by the computer’s algorithm-of-the-moment and transmitted to the actor, in real time, via earbuds.

Mashups of Shakespeare on YouTube may be less pretentious than these theatrical performances, but they speak to a strong desire to intercut 400-year-old fragments from Shakespeare with everyday modern life. Craig Barzan’s Hamlet on the Street and Noor Ghuniem’s The Tempest – The Missing Scene are particularly striking examples.

If you watch YouTube on a smartphone while you walk or let your attention wander to other people, objects, and events around you, the intercut between art and life becomes a physical fact. Make the device a smart watch, and the time factor is palpable: 1616 is juxtaposed with 2016 “in real time.”

But if cutwork with Shakespeare is nothing new, why has it become a fetish in the 21st century? One reason, surely, is the ease of making cuts with digital technology. Another reason, just as surely, is fragmentation in contemporary culture – fragmentation that may itself be a function of digital technology. A related factor is the general speeding up of contemporary life, exemplified in the clip culture that dominates YouTube. Judging from YouTube postings, the two-hour duration of Shakespeare’s stage performances can now be no longer than 15 minutes, preferably 10.

More disturbing is the thought that the violence of contemporary cutwork – its radicalism, its defiance of tradition, its psychological fascination – is connected with actual violence in the culture at large.

If so, the situation now may not be so different from the situation in Shakespeare’s lifetime, when most adult males carried weapons in the form of knives or swords and violent crime was rife. Shakespeare most frequently uses the word “cut” in relationship to body parts. At a deep level we should acknowledge the connections, in early modern culture and in contemporary culture, between cuts as bodily violence and cuts as violent ways of making art.

At a more fundamental level still we can point to the “gappy” nature of perception: we perceive the world in a series of cuts lasting no longer than three seconds.

Most important of all, however, is the selection and arrangement of experience that goes into the making of all forms of art. Cutting can create as well as destroy.

This article was originally published on theconversation.com. Reposted with permission. Read the original article.