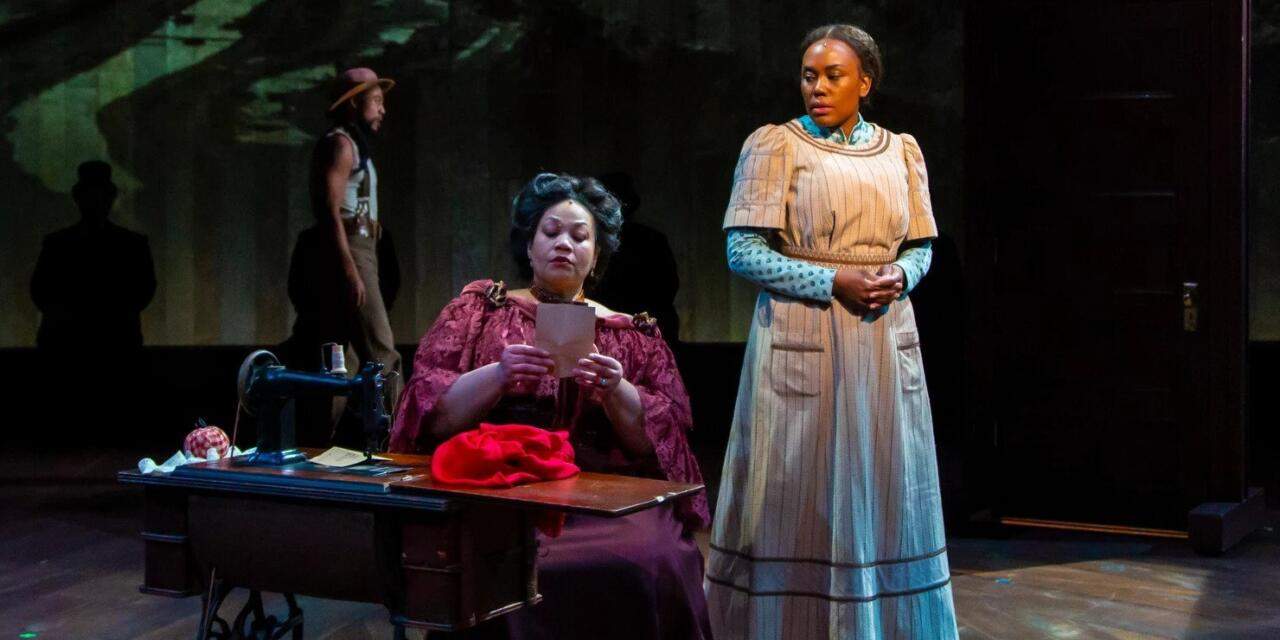 I went to the new opera Intimate Apparel because the 2003 play it was made from is one of my favorites by Lynn Nottage. Cards on the table, I’m no opera fan in general but rather one of those people who deeply enjoys a few dozen particular operas. This one—commissioned by the Metropolitan Opera and Lincoln Center Theater’s New Works Project and finally premiering after a 10-year collaboration between Nottage as librettist and the composer Ricky Ian Gordon—has many merits and beauties, but it’s not really interested in endearing itself to people like me.

The Gordon score is sensitively synched with the drama’s complex psychological action and spiced with alluring ragtime, but its overall tenor is caustic and gravelly. It contains no melodious arias. The show is entirely sung-through and has only a handful of moments with directly comprehensible lyrics. The libretto is projected onto the set’s rear wall, an improvement, I suppose, on opera’s usual proscenium-top supertitles but hardly a substitute for the direct, immediate performer-spectator connections that plays and musicals establish. I found the show, particularly the first half, rather taxing.

Intimate Apparel is the play that put Nottage on the map, announcing her as an important new American dramatic voice. Performed throughout the U.S. after its NY premiere, it tells the story of Esther, a talented Black seamstress in New York City in 1905, who exchanges letters with a Barbadian laborer named George working on the Panama Canal and decides to marry him sight unseen. The audience quickly recognizes that this romance will not go well, and the emotionally fraught complications that ensue could indeed be construed as operatic. What’s remarkable about the play, however, is its subtle, detailed portrait of an illiterate yet skilled and striving Black woman living a little-documented sort of life in post-Reconstruction America. The story is gripping and heartbreaking because of the very specificity that evidently had to be diluted to make room for music and dance in this opera.

The original play’s opening scene, for example, is a private conversation between Esther and Mrs. Dickson, who runs the rooming house where she lives. Mrs. Dickson wants to entice Esther downstairs to join a lively engagement party for another resident and maybe meet an eligible young man. It’s a short, poignant, insular interaction whose bubble of protective emotion is punctured only at the end when we hear George’s first letter from Panama. The opera’s opening scene, by contrast, thrusts us into the bustle of that party, with a chorus of singers and dancers brightly intruding on Esther’s privacy (“Step lively! Light and gay! Light and gay! Step lively!). There’s even a fat, ebullient, frock-coated tenor playing the unappealing bachelor Mrs. Dickson wants to set her up with, who’s never seen in the play. The whole time these other people were onstage I wanted them to go away.

Another example is the scene when Esther (Kearstin Piper Brown) and Mayme (Krysty Swann), a prostitute she has befriended, share their secret dreams of better lives. Esther has been saving for years to open a beauty salon and Mayme imagines traveling the world as a concert pianist. In the play this confidence is an intimate, wistful tête-à-tête exchange in a sultry, quiet boudoir. In the opera, it’s opened out as public performance, with the dreams described in an effusive duet anthem that transforms them into platitudes about self-reliance.

There’s no need to go on. I recognize that I’m not the natural audience for this work and, happily, I found the second act more moving than the first. I liked, for instance, that the opera—well directed by Bartlett Sher—had sturdy and comely George (Justin Austin) traipsing through the background of Act 1: Esther’s winsome romantic fantasy. That sharpened the painful reveal after he arrives in Act 2, admits he paid someone to write his poetic letters, and proves to be a womanizing wastrel who gambles away her life savings. I also enjoyed the portrayal of Mr. Marks (Arnold Livingston Geis), a Jewish merchant Esther buys fabric from and secretly loves. Brown and Geis have a warm chemistry, and Sher wittily uses the sensuality of the fabric rolls in Marks’s shop to underscore their attraction.

In the end, though, looking around me at the Mitzi Newhouse, at what I’d guess were 80 percent white faces and 50-odd empty seats, I wondered who the natural audience for this work was.

Fifteen years ago the music critic Anne Midgette published a perceptive essay in The Opera Quarterly stating that she regarded the purpose and appeal of American opera as chronically unclear. Opera had never quite rid itself of the odor of foreign import in America, she said, and its audience was persistently balky and indeterminate. Even American composers signaled anxiety about this problem by avoiding the term “opera” in favor of ingratiating substitutes like “music theater” and “opercal” (Gordon’s odd coinage). A work like Intimate Apparel adds the perennial conundrum of how to diversify audiences in America’s historically white temples of high culture like Lincoln Center. The Met-LCT New Works Program deserves credit for trying to seed a future for the art by commissioning new operas by select playwright-composer pairs. It’s a worthy mission. Yet it remains to be seen how much traction these commissions acquire in a culture with such a long record of marginalizing this kind of art.

This article was first published by Jonathan Kalb on Feb 13, 2022, and has been reposted with permission. To read the original article, click here.