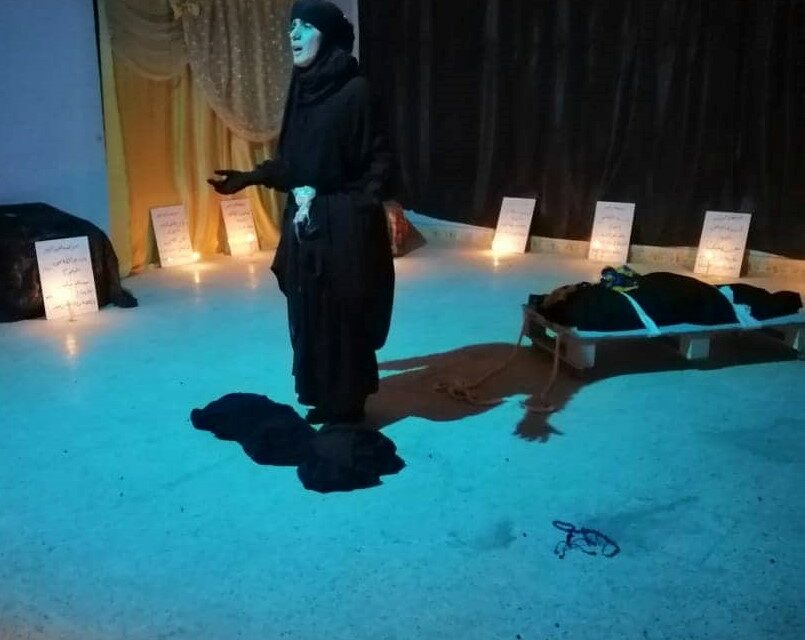 On May 2nd, 2019, at The Institute of Fine Arts in Basra, Banin Abbas, an Iraqi actor, and director from Basra, directed and performed a powerful one-woman show that criticizes and challenges patriarchy and the status quo in Iraq. She adapted a play called Al-Masaar (The Path), originally written by Iraqi playwright Abbas al-Harbi. 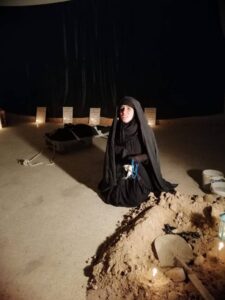 The play is considered to be one of the few that have been adapted, directed and performed by a woman artist. Unfortunately, due to the social and religious stigma attached to women who work in theatre, Iraqi theatre suffers from an absence of women playwrights. The lack of scripts written by women playwrights constrains female artists and leads them to rely on adaptations from either Western drama, as in Awatif Naeem’s adaptations of Lorca’s plays, or of Arabic plays, as in al-Harbi’s Al-Masaar.

The play tells the story of a mother (the character is a father in the original script) who notices that her virgin daughter’s belly is getting bigger. Terrified by what people say about her daughter’s condition, she takes her daughter to the graveyard to kill her and restore the family’s honor. In the course of a long and daring monologue, the mother realizes that her daughter is not pregnant, but that she suffers from an unknown illness that makes her belly big.

The play condemns the oppression of women in Iraq, especially those in the south. Women in the south, in the rural areas, in particular, are subjugated to all kinds of violations such as honor killing, domestic abuse, forced marriage and ‘fasiliya’ (giving a virgin woman to another clan to resolve a conflict between fighting clans). Therefore, women’s fate is completely controlled by men.  This play exposes and critiques one of these violations practiced against women, honor killing. Instead of having the father (male authority) who decides the fate of his daughter (original script), Banin replaces him with the mother character, to lead the call for change and freedom and to set an example for other women as well. 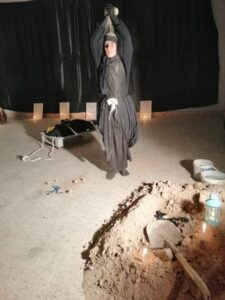 On the other hand, some of the audience who saw the performance interpreted the play as a criticism of the status quo in Iraq. The daughter’s situation (with the unknown illness) symbolizes the current confusing and unhealthy situation in Iraq, in which the people don’t know the main cause behind the chaos and corruption that plagues their country. Iraq is pregnant with an illness that produces uncertainty, confusion, and despair.

As for the technical aspects of the production, the director uses a data projector to showcase verses from the Quran. The verses remind the audience of the evil and sin of killing an innocent soul: “…anyone killed a person, not in retaliation of murder, or (and) to spread mischief in the land – it would be as if he killed all mankind, and if anyone saved a life, it would be as if he saved the life of all mankind.” (Chapter five, sūrat l-māidah, verse 32) . The other aspect is the use of candles. As shown in the pictures, the stage is a graveyard where the actor is surrounded by candles and graves of living people. In addition to providing a ritualistic atmosphere, candles may symbolize various things such as light, illumination, warmth, fire in hell, mortality, etc. The names of the living on the gravestones refer to those “who are physically alive but are in fact dead because they are inactive and indifferent to the dire problems of the society”, Banin said. To add to the melancholic mood, the director utilizes an Iraqi southern melody named ‘Mhamidawi’, which is known as the most lugubrious music in Iraq.

Moreover, the director/actor employs two elements of nature: mud (earth) and water. She covers her face with mud to express her feeling of shame because of her daughter’s situation, but later she washes with water to clean and purify herself from any sin that may have put her in such a predicament.

Finally, we hope that the number of performances by women increases in the future, so that more women’s voices may be heard in Iraq.

Written by  Dr. Amir Al-Azraki and Dr. Mouibid al-Issawi. Dr. al-Issawi is a lecturer of aesthetics and playwriting at the Fine Arts Institute and College of Fine Arts in Basra.