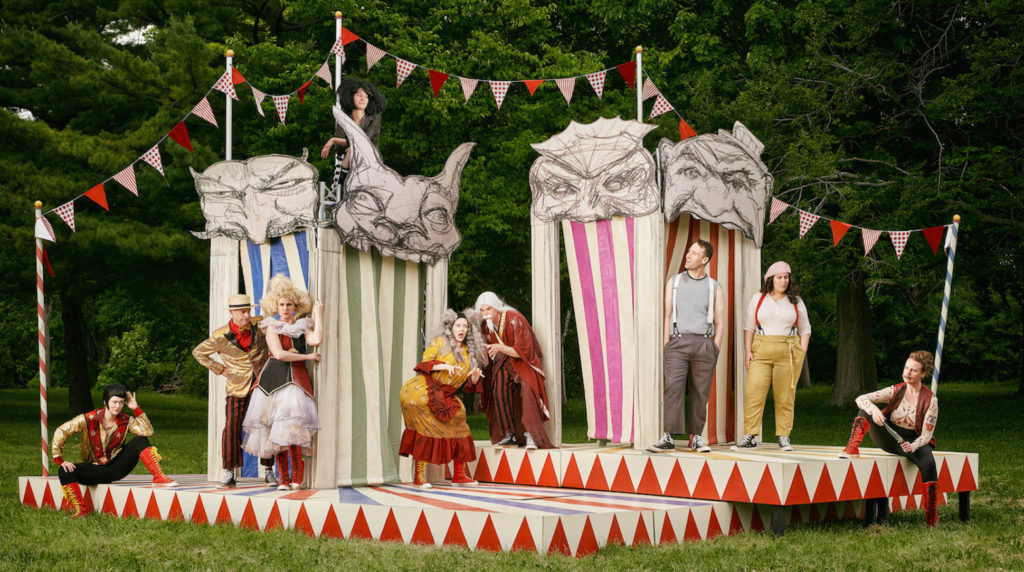 "Romeo and Juliet" by A Company of Fools. Photo by JVL Photography.

Has A Company of Fools rediscovered its mojo? After a series of hits and misses, including last summer’s unfocused Twelfth Night, and an apparent struggle over just how much of their beloved foolery they want to inject into their shows, the Fools have bounced back to form with a Romeo & Juliet that’s adventurous, carnival-like and ultimately serious.

Exuberance defines the show. That’s in keeping with the storyline about young, upstart love. But it also reflects this production’s timely championing of those who, fed up with oppression, challenge power, tradition, and entitlement.

Leslie Cserepy’s Romeo is very much the love-struck young man, ping-ponging between poetic flights of fancy and the furrowed brow of deep dejection. Norah Paton gives us a strong-willed, if occasionally overwhelming, Juliet (she’s hilarious in the balcony scene, where she keeps reappearing like a jack in the box to hurl just a few more lines at an increasingly beset Romeo).

These star-crossed lovers, caught up in an inter-family feud that’s not of their making, give battle to those who oppose their union, including Juliet’s old-school parents.

Juliet’s unpleasantly oblivious mother, Lady Capulet, is played by Kate Smith. The actor brings to her character a supercilious air and a wig that resembles a poodle competing for best in show.

Geoff McBride is Lady Capulet’s blustering husband, a man whose sparkly, circus-like jacket tells you that this is a guy for whom appearance is job one. Turns out he’s also big on power, as we learn when he berates his daughter, his daughter’s old nurse (Kate McArthur), and his wife in tyrannical fashion. It’s an unexpectedly shocking scene that builds in intensity, with Juliet cowering beneath her father as he rants and raves. This is an authority that cries out to be overthrown.

Of foolery, there’s plenty in this production directed by Nicholas Leno. It’s there in the vigorously ribald stuff. It’s there in what passes for blood during the fight scenes (sorry, no spoilers here: you’ll have to see the show to see the blood). It’s there in the terrific costumes by Vanessa Imeson, including the Prince of Verona’s ringmaster outfit and Mercutio’s Elvis get-up, which may mark the first time the King has ever held forth on Queen Mab. McArthur plays both the Prince and Mercutio, just as all the actors perform multiple roles.

There’s also original music, including Smith and McArthur on the ukulele and Andrea Massoud (Benvolio, Apothecary, and others) playing the box drum.

This show was in Navan — the Fools play various outdoor venues around Ottawa all summer — on a grassy area behind J.T. Bradley’s country store. At one point, a fire engine emerged from the nearby fire station to rumble and beep as firefighters swept the station floor and a chainsaw unaccountably fired up. Meanwhile, up on the stage, Romeo prepared to kill himself. “Oh no!” gasped an audience member as Romeo drained the bottle of poison and the fire engine growled, that gasp being as strong a testament to the show’s power of engagement as you could ask for.

Granted, there were also some titters when, a minute later, Juliet, having apparently expired herself, suddenly sat bolt upright, as alive as you or I, to find her beloved Romeo stone-cold dead beside her. It wasn’t intended to be funny, and hopefully Paton can find a way to introduce the pathos the scene demands.

Despite the very occasional misfire, this Romeo & Juliet moves smartly from fun and subversion to tragedy. In the process, it proves itself to be a classic Fools show.

Romeo & Juliet is a Company of Fools production. Reviewed in Navan on Wednesday night. It runs at locations in and around Ottawa until Aug. 17. Tickets & information: 613-863-7529, fools.ca

This article was originally published in Capital Critics’ Circle and has been reposted with permission. Read the original article.