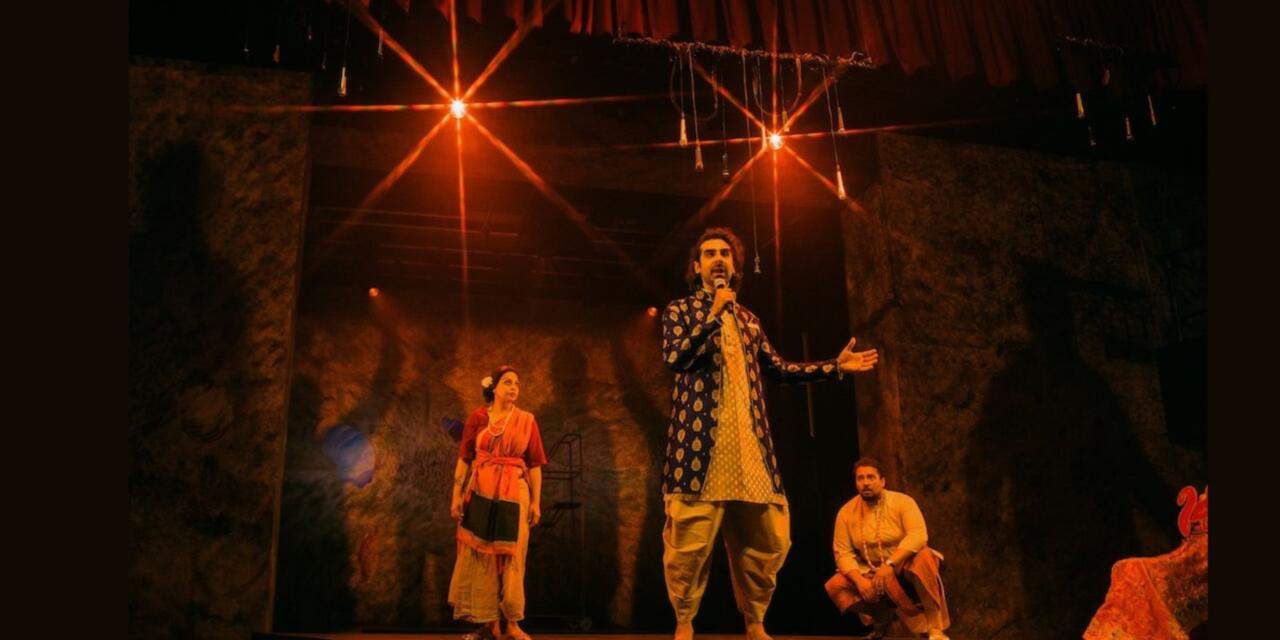 While Britain is experiencing a “summer of discontent”, with inflation, strikes and other conflicts, it is odd that so few plays are as overtly political, and as overtly resonant as Sonali Bhattacharyya’s Chasing Hares, which won her the activist Theatre Uncut’s Political Playwriting Award, and is now on the main stage at the Young Vic. Although the play is set in Kolkata in the 2000s, it makes connections with Britain today, and includes a passionate argument in praise of the power of theatre to change people’s attitudes. But it is not entirely problem-free.

The story focuses on Prab, a machine operator in a West Bengali factory who is married to Kajol, as both struggle to make a living and a future for their baby daughter Amba. Having been a student firebrand, with aspirations to write a novel, he is angry at the tactics of Devesh, son of the factory owner, who closes down the enterprise at regular intervals in order to keep control of the workforce, who are paid pitifully and include a number of under-age children. Although Bhattacharyya shows the injustice and agony of this kind of intensive exploitation, she doesn’t point out that the enjoyment of cheap clothes in the West is entirely based on it. Globalisation means that we are complicit in the brutality of Indian capitalism.

While Kajol helps distribute food to the hungry, Prab, in a plot twist that owes more to fantasy than reality, joins a Jatra street folk theatre company, which is led by Devesh, who longs to be a thespian, and his lover, star actor Chellam. Apparently oblivious to the newcomer’s radical ideals, boss man Devesh asks Prab to write material for a new play. Instead of taking the usual route of adapting an episode from the Hindu epics The Mahabharata or Ramanaya, he recycles the charmingly lefty bedtime folk tales he tells Amba, which feature a young girl, Chandi, and her talking animal friends, who take on the local oppressors. Chellam, increasingly disillusioned with Devesh, decides to help Prab — and he then has the chance to make a significant contribution to fight against child exploitation.

In a framing device which shows the grown-up Amba working in the gig economy in today’s Leicester, Bhattacharyya makes connections between work in the garment industry in developing countries and work in Britain today. She underlines the injustice of both situations, where workers are in an impoverished and precarious state, and argues that collective action is the only response. As Amba says, “We can work it out together. It’s not up to me — it’s up to us.” This is typical of the warm-hearted nature of the play, which is both inspiring and acutely relevant. It makes a great and welcome change to the usually cynical view of political action in contemporary British theatre.

But, as so often with militant theatre, Chasing Hares faces the usual problems of the genre. It is aimed fairly and squarely at progressives and liberals, and while it is informative (especially if you haven’t been following economic developments over the past two decades), its picture of supercharged capitalism is very familiar. Bhattacharyya’s text is also rather clumsy, being too obvious in its dialogues and too predictable in its plotting. On the other hand, her characterisation — especially the vainly strutting macho Devesh and the sharp-tongued Chellam — is often perceptive and sometimes delightful. The story is well paced and its politics are, in the end, unambiguous.

And perhaps that’s a further problem because the meaning of the story is that while a worker such as Prab can enjoy the job promotion, and improved living conditions that result from his collaboration with the rich and powerful (as Kajol points out, this is surely great for their daughter), he must finally stand up for justice — even if that means personal disaster. If this is politically correct, it is also unappealingly self-sacrificial and pessimistic. Likewise, while I was impressed by the inclusion of long monologues about Chandi and the talking animals, I also found these hard to follow, and couldn’t quite shake off their vulnerability to mockery. They also slow down the first half of the evening. Then, at one point, a utopian society is evoked — as usual, it seems a little too saccharine for my taste.

Milli Bhatia’s engaging production is designed by Moi Tran, with a revolving stage, and is helped by attractive video projections of shadowy flora and fauna by Akhila Krishnan, as well as a good cast. Irfan Shamji is suitably torn as Prab, while Scott Karim and Ayesha Dharker, as Devesh and Chellam, are both excellent, with his vigorously evil leers being matched by her acidic worldly putdowns. Zainab Hasan has a calm practicality as Kajol, while Saroja-Lily Ratnavel’s Amba represents the present and hope for the future. With its energetic arguments, moments of great charm, gritty humour, and mix of filth and idealism, this story of resistance and dignity in the face of dreadful global exploitation is both relevant and contemporary.

This article originally appeared on Aleks Sierz on July 25, 2022, and has been reposted with permission. To read the original article, please click here.