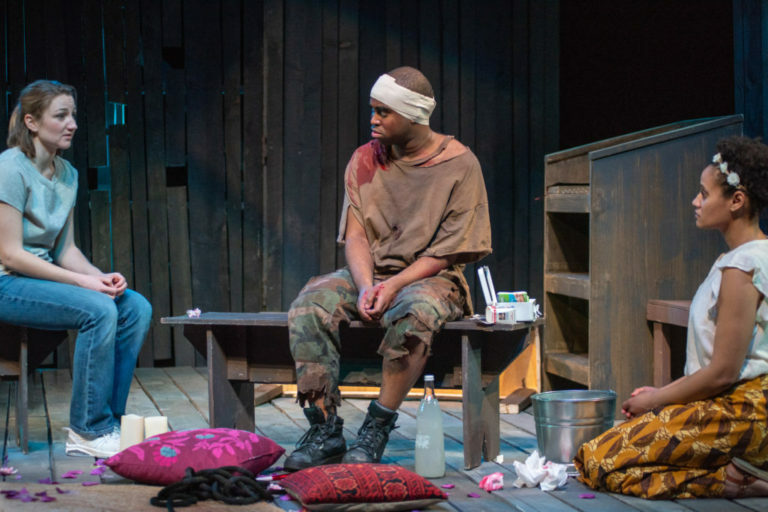 Two sixteen-year-old girls Chris (Marge Dunn), the daughter of an American missionary and Adiel (Rachel Cognata), a Ugandan, are commemorating their love for each other by enacting their marriage in the shabby church where Chris and her parents also live. In order for the girls to keep their privacy, Chris gave her mother and father sleeping pills. Adiel, the more mature of the two, prepared for the ceremony by scattering flower petals on the floor, lighting a candle, and bringing a tape recorder to record their vows. Secrecy is vital as homosexual acts are strictly punished.

The ritual is disrupted by a wounded child soldier, thirteen-year-old Pika (Marc Pierre) who grabs Chris, covers her mouth, and points his gun at the girls. After he faints from weakness, they tie him up and discuss their futures which they view differently. The more generous Adiel feels obliged to help Pika. When he awakes he talks about his experience as a soldier and the guilt he feels for the “bad things” he has done. Guilt and fear had led him to try to run away: his punishment was having his ear cut off. He is troubled for his soul which he feels is shrinking and is terribly afraid of being caught again by the army.

To comfort Pika, Chris tells him the story of a cardboard piano her father made for her when she was a young child. She had yearned for a piano and was greatly disappointed by the cardboard imitation. In a fury, she tore it up. When her father picked up the pieces and went into his study and shut the door, she worried that he would not forgive her. However, he reconstructed the toy piano and she learned that whenever we break something, it is pardonable if we mend it.

The girls decide to let Pika come with them when they leave the township for their new life. A soldier (Michael Ofori) breaks into the church looking for Pika who along with Chris is hiding on the roof. Instead, he finds Adiel and threatens her with a machete. Pika rescues her and himself by battering the soldier’s head with a rock. When the girls embrace a shocked and revolted Pika shoots and kills Adiel. He runs off as Chris tries to shoot him.

The second act which occurs fourteen years later is almost a free-standing play. Chris returns to the remodeled church now in the hands of Paul (Michael Ofori), the new preacher and his wife Ruth (Rachel Cognata) who are celebrating their second anniversary. Paul is practicing his sermon based on the Good Samaritan, a parable he is incapable of understanding.

Chris enters the church to ask permission to bury her father’s ashes. Although Paul and Ruth agree, Paul seems uncomfortable particularly when Chris asks what happened to his ear. He grows more uncomfortable when his wife tells a story of a woman who wanted a piano and was given a cardboard one by her husband Pika. Ruth leaves and Chris confronts him. They argue and Francis (Marc Pierre), a gay and religious man who wants the preacher’s help arrives but Pika is as homophobic as ever.

Pika’s murder of Adiel is revealed, shocking her cousin Francis who had believed she committed suicide. The upset preacher leaves. In the last scene, Ruth and Chris talk. As a loyal wife, Ruth still trusts her husband’s ability to become a good man. Chris and Francis leave the township.

Director Benny Sato Ambush delivers a Cardboard Piano well played by its four actors although the script is not always believable. Standouts include Rachel Cognata as a warm, kind, yet realistic as Adiel in act one and a loyal if not always truthful wife in the second act. The more experienced Marc Pierre is excellent as the soldier Pika in the first act and Francis in the second.

Cardboard Piano plays through April 14, 2019, at the New Rep Theatre in Watertown, MA

This article appeared in Capital Critics’ Circle on April 4, 2019, and has been reposted with permission.