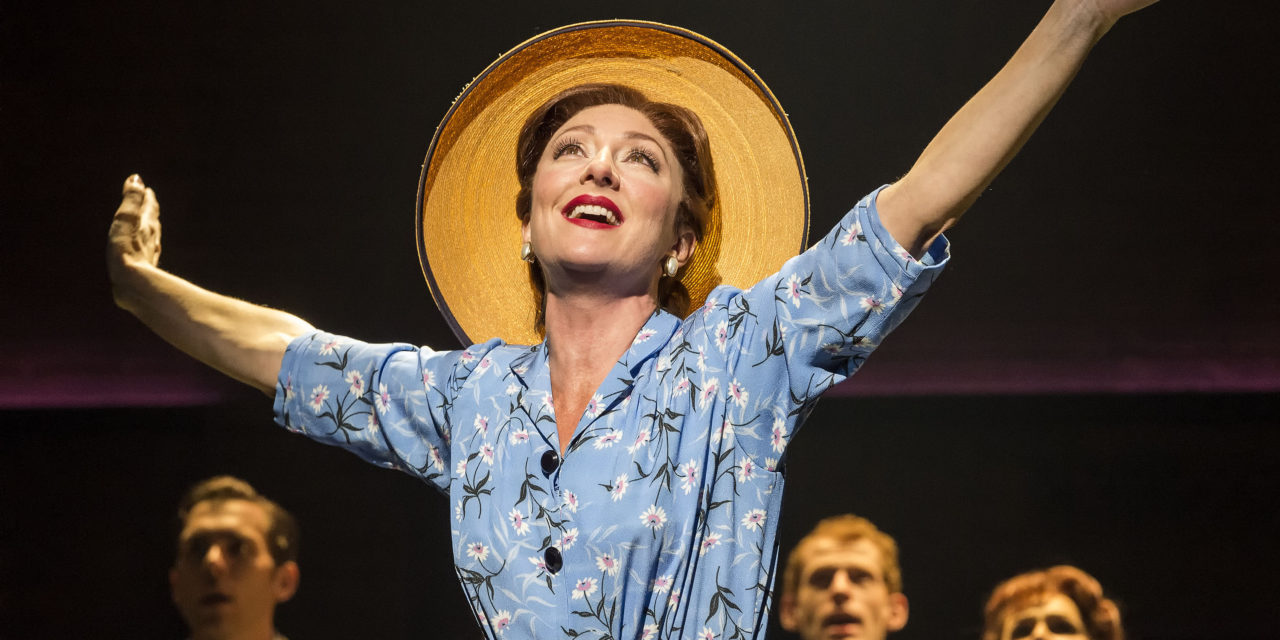 Carmen Cusack in Steve Martin and Edie Brickell's "Bright Star." Directed by Walter Bobbie, "Bright Star" will be presented by Center Theatre Group at the Ahmanson Theatre through November 19, 2017. Photo by Craig Schwartz

With the opening of Bright Star at The Ahmanson Theatre at The Music Center in Downtown Los Angeles, our City of Angels has gotten a little brighter thanks to the multi-Tony Award-nominated musical with music lyrics and story by Grammy, Emmy, and Oscar winner Steve Martin and Grammy winner Edie Brickell.  The cast includes Tony Award nominee Carmen Cusak as Alice Murphy, who is nothing short of a pure delight to watch as she navigates North Carolina in the early 1920s and the mid-1940s as an older and more severe version of herself.  The physical choices she makes are charged with information about her character and her voice has a stunning power to athletically maneuver through emotional shifts with ease.  It’s a stand-out performance worth seeing for yourself, she just shines on stage. 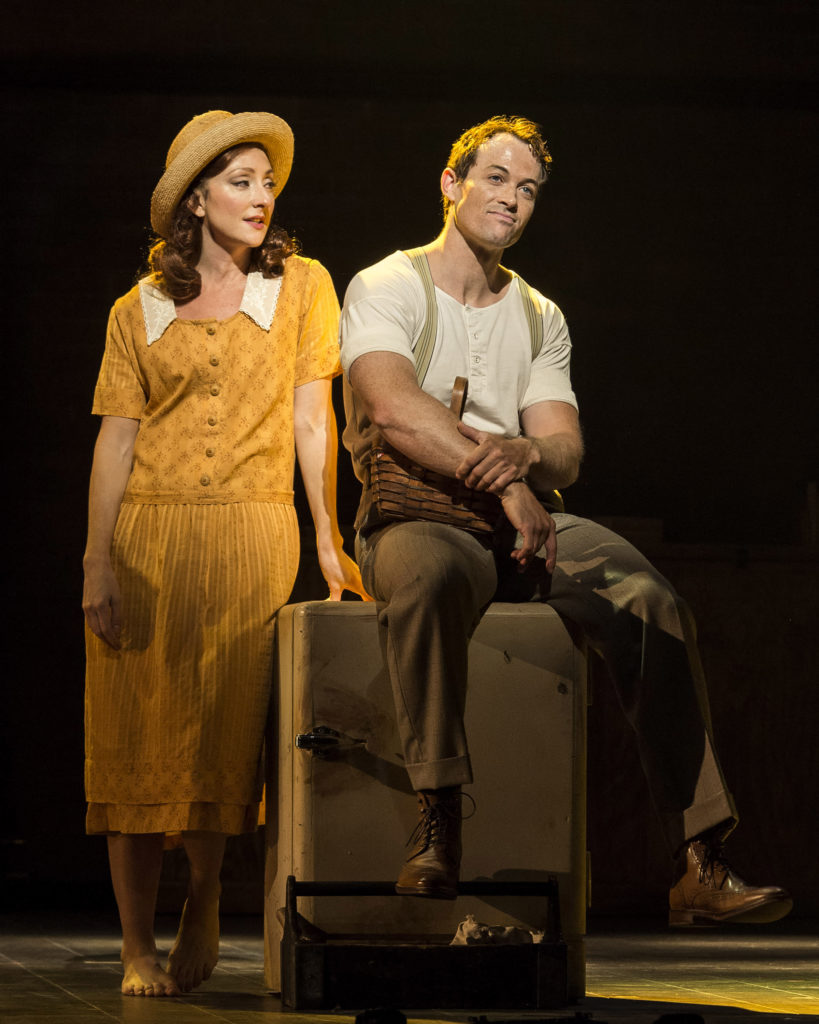 Ms. Cusak opens the show as Alice’s 1920s younger self with an invitation to know more about her via the song If You Knew My Story and her enthusiasm is infectious.  After meeting her as a young Alice who would seemingly rather go barefoot than wear shoes it is somewhat startling to find the story shifts to A.J. Shivley as Billy Cane – a soldier returned from WWII to learn his mother has passed away in his absence.  This isn’t the last family tragedy we experience with these characters, and though the music speaks to the heart, there are moments where the emotion doesn’t seem to translate entirely to the physicality of the performers as Mr. Shivley and his father, Daddy Cane [played by David Atkinson] perform She’s Gone.

We spend the next few scenes with Billy and Margo [played by Maddie Shea Baldwin] and learn about Billy’s dream of becoming a writer now that he’s returned home.  There’s something overly sweet and pure about these characters and it takes a little while for them to work their way past what one has become accustomed to calling our modern-day cynicism.  There is no sense of Billy as a man haunted by his experiences in a bloody war and Margo is all too willing to sacrifice her happiness by keeping her feelings for Billy hidden while he goes off to the city to chase his dreams. One can’t help but think of Thornton Wilder’s Our Town, and for more than one reason.  Everything happens in front of us.  There are no wings for the performers to hide in.  There are no set changes that take place behind mid-stage curtains and there are only minimal props to distract us from the characters.  Everything is out in the open and everyone that can remain on stage.  In one costume change that occurs down center, we watch older Alice discard her suit and heels in favor of a yellow dress and bare feet as the ensemble shifts scenery and dances past with an energy that takes us back in time before we realize what is happening.

Josh Rhodes’ choreography succeeds in completely immersing the movement into the storytelling without us often being able to safely say where dance or movement begins or ends.  It is one of the most visually refreshing aspects of the show as a whole.   Eugene Lee’s scenic design centers around a wooden shack that serves as a mobile orchestra pit and modest cabin to a number of characters in rural North Carolina and is framed by a viaduct that acts as proscenium and elevated track for a model train.  At first, the train strikes us a charming detail but that little engine takes on weight in both timelines as it takes characters away from one another and later brings some back together.  It’s easy to overlook the efficiency and character visible in each scenic element as a bookstore is represented by a couple of bookcases and a bar by a handful of railings but it’s worth making an effort to look at how effective these pieces are.  For the most part Obie Award winner and Tony Award nominee Japhy Weideman’s lighting design is felt more than it is noted by the eye until it is used to solid dramatic effect in moments near the end of both acts, which is also where Drama Desk Award winner and Tony Award nominee Nevin Steinberg’s sound design becomes its most effective partner. 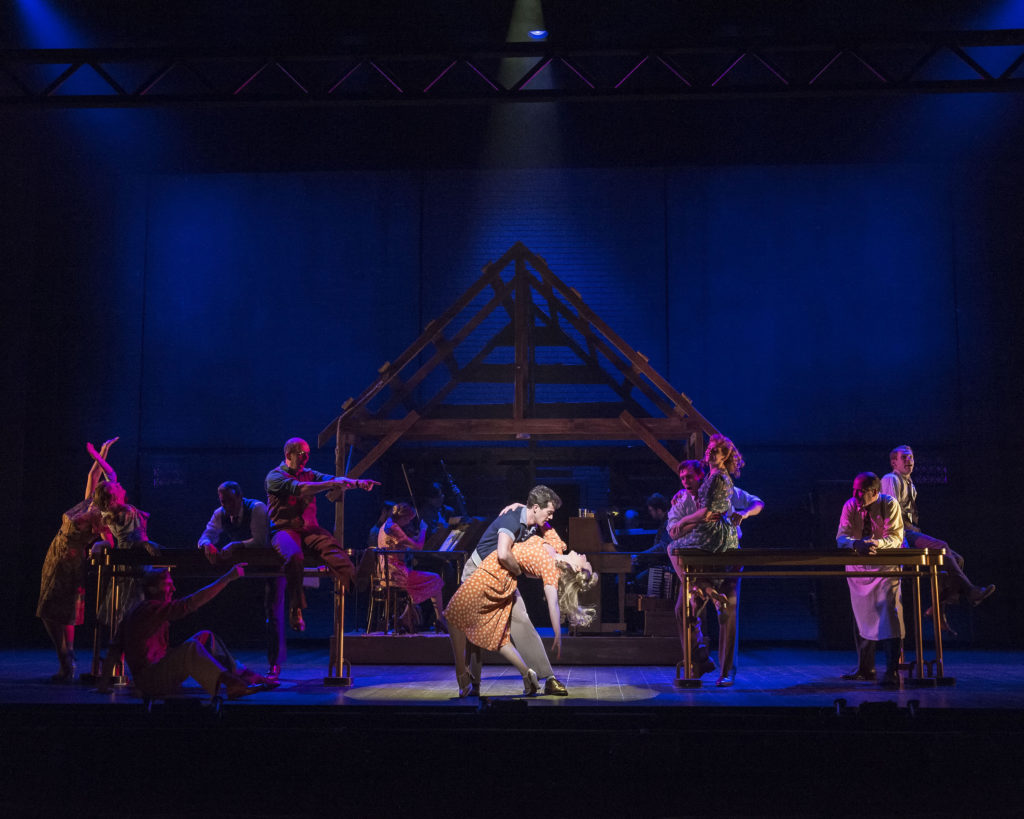 Beyond the appeal of a wholesome charm that makes us feel nostalgic for a time that may never have existed, it’s the music that grabs you and keeps your attention fixed to the stage.  The musicians are remarkable.  In particular, Martha McDonnell is capable of making her violin howl like a banshee or sound like an angel and George Guthrie’s banjo reveals the complexity of each arrangement where it appears.  If you want to learn how to belt a song with enough power and emotion to make a grown man cry, watch Ms. Cusak and Allison Briner-Dardenne [as Mama Murphy, Alice’s mother] tear the roof off the theater in Please Don’t Take Him.  Ensemble vocals add warmth and emotional dimension throughout most of the piece and members of the orchestra often slip off their wooden stage to join that ensemble, again melding movement, music, and sound into one mesmerizing bundle.  We get so carried away by the sound of the piece we are tempted to overlook some aspects of the story that isn’t as strong. 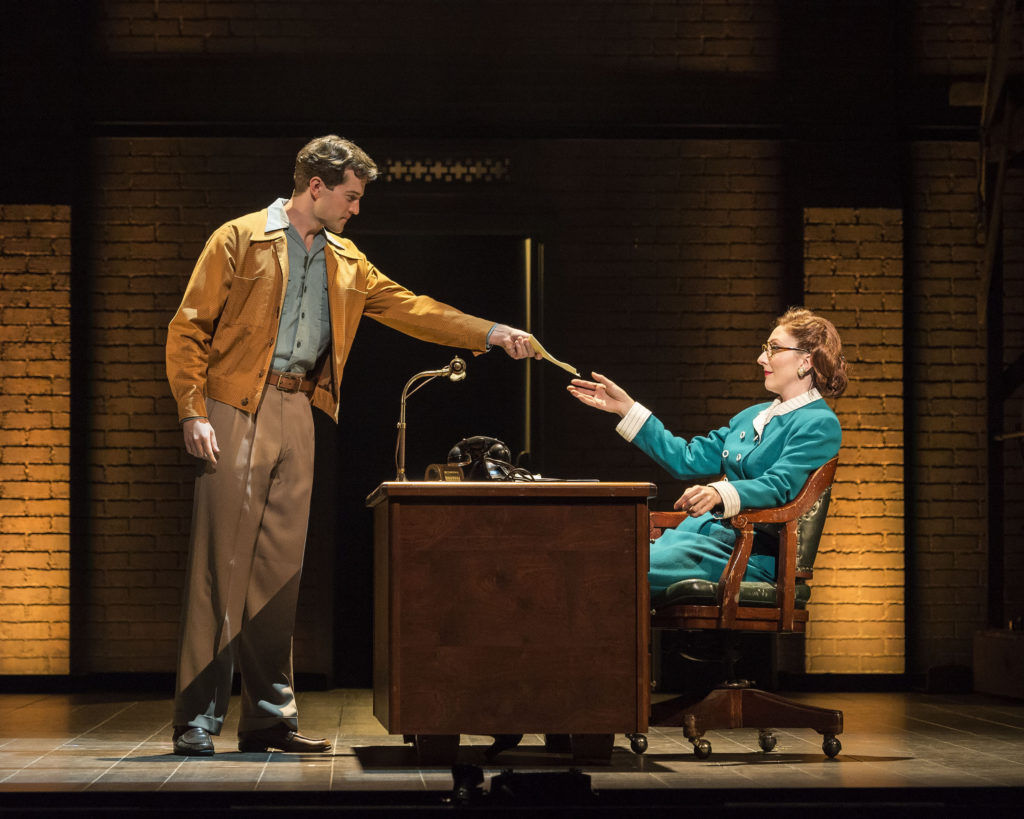 This being the opening run of a first-national tour, these thoughts may seem like a fair example of closing the barn doors post bolted horse but it feels important to note that though young Alice is the character that invites us into her story, it really isn’t her story that we end up following.  Young Alice might have had many adventures but the arrival of Billy Cane tears us out of her world and makes the story his.  It might have made more sense to open with the Alice we meet in his timeline first in that opening song; at least it might have been easier to connect the two women as being one and the same.  Structurally we don’t watch older Alice who runs her own literary journal transform into younger Alice who seems undereducated until after we’ve seen Billy for some time and even then, the song that initiates that transformation [Way Back in the Day] seems almost ham-handedly initiated by the comedic stylings of Alice’s assistants Lucy Grant [Kaitlyn Davidson] and Daryl Ames [Jeff Blumenkrantz] asking their boss to come to a bar/dance.  Both Ms. Grant and Mr. Ames provide welcome moments of comic relief as the story progresses but the most successful of these beats happens outside of Alice’s experience entirely when the two take Billy Cane out to a bar for his first drink.  Once you’ve watched the piece, you might find ground to argue that the story is still Alice’s but with two female leads, both pining for lost loves [Alice first, then Margo] it’s food for thought.

But back to the music, for that is what resonates the deepest and longest, in the end, thanks to Mr. Martin and Ms. Brickell, the Orchestra, Grammy Award winner Peter Asher (music supervision), Rob Berman (supervising music director and vocal arrangements) and Tony Award nominee August Eriksmoen (orchestrations).  It’s a treat to be able to sit in a house like the Ahmanson’s and listen to such beautiful work with a crowd that was quick to give a standing ovation to all, but especially to Ms. Cusak.  Directed by Tony Award winner Walter Bobbie with costumes by Tony Award winner Jane Greenwood and hair and wig design by Tom Watson, the cast also includes Stephen Lee Anderson, Jeff Austin, Patrick Cummings, Devin Archer, Kelly Baker, Audrey Cardwell, Max Chernin, Robin De Lano, Richard Gatta, David Kirk Grant, Donna Louden, Kevin McMahon, Alessa Neeck, Robert Pieranunzi and Michael Starr. 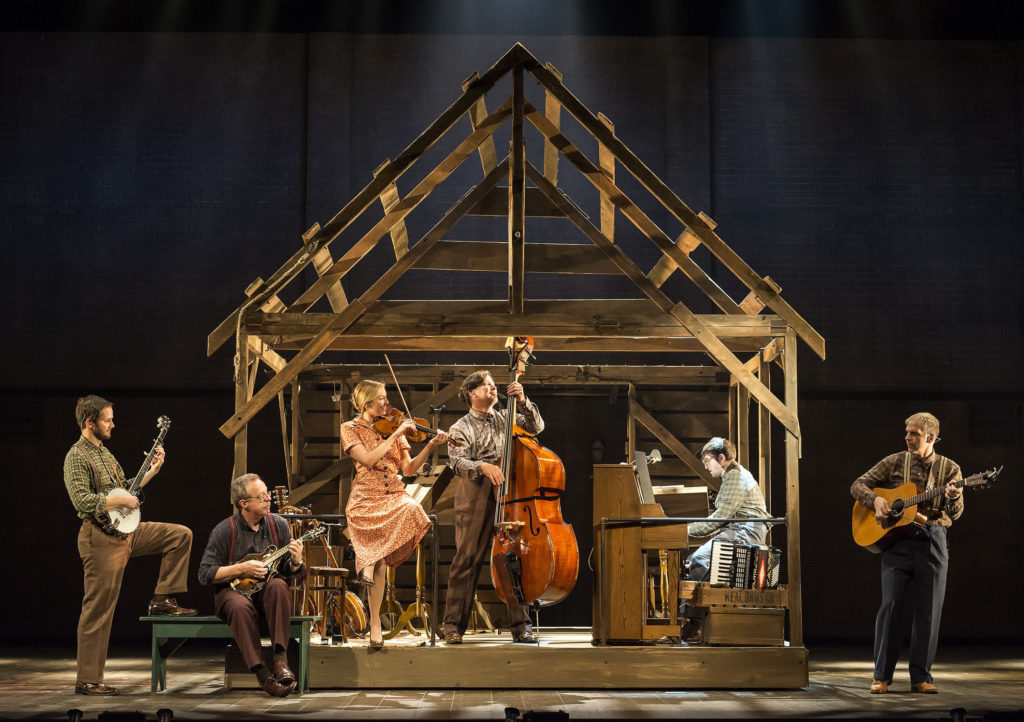 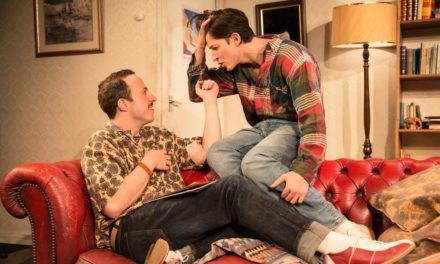