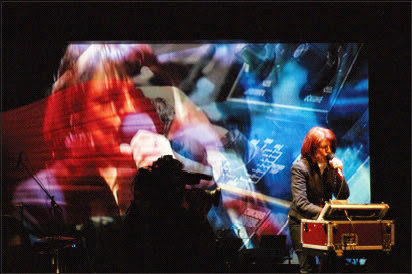 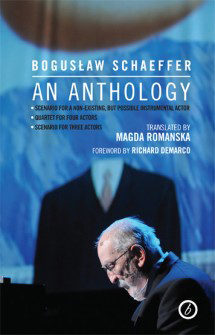 This beautiful new volume, a collection of three plays translated by Magda Romanska, is an accessible and illustrative introduction to the work of Bogusław Schaeffer. Despite being one of the most performed playwrights in Poland and celebrated globally, Schaeffer (I suspect) remains largely unknown to many English-speaking readers. His work as a dramatist, composer, graphic designer, and musicologist has garnered the attention of figures as diverse as David Lynch, Eugene Ionesco, and Austrian chocolatier Meister Hacker of Konditorei Confiserie Hacker (who created a special chocolate to honor Schaeffer’s 80th birthday). A 2009 documentary film, Solo, explored Schaeffer’s work and was screened at the National Gallery of Art in Washington, D.C., the Museum of Fine Arts in Boston, and the Morgan Library and Museum in New York.

Schaeffer’s prolific output across media places him in a tradition of Polish artists who worked in multiple genres–Bruno Schultz, Stainsław Wyspiański, and Stanisław Ignacy Witkiewicz (Witkacy) are just a few who come to mind. In a 2011 piece for this publication, Romanska notes that among such artists, Schaeffer is remarkable as “the only composer in Western history with an independent dramaturgical career, and the only playwright with an independent career as a composer.” Indeed, Schaeffer is recognized independently as both an innovative playwright and composer. Yet what makes the plays in this collection particularly engaging are the ways in which they are situated at the intersection of these genres. As Romanska observes, Schaeffer seems able to “blend his music and playwriting career seamlessly.” The dramas themselves assume musical forms, while simultaneously exploring the theatrical nature of musical performance.

Though a wholly unique talent, Schaeffer engages his work with a wide array of international artists and theorists. As the central figure of his Scenario for a Non-Existing, But Possible Instrumental Actor explains that “contemporary music is sentenced to auto reproduction,” and that “we devoid it of its original aura,” one is likely to think of Walter Benjamin’s The Work Of Art In The Age Of Mechanical Reproduction (1936). Even without this point of reference, the question of what imbues art with its particular “aura”–what makes art “arty”–is certainly one of interest, and is playfully engaged in Schaeffer’s work. Quartet For Four Actors, the second play in this collection, further explores this question and underscores the degree to which musical performance is itself a kind of theatre. As a quartet of actors mimes an instrumental performance, we are made aware of the degree to which gesture and movement inform our experience of music. This work, with short scenes often delineated with timed periods of silence or cacophony, reminds the reader of the work of John Cage, in concert with whom Schaeffer’s musical works are often discussed. For those with some familiarity with Polish literature, the works in this collection also might be read in dialogue with the interwar writer Witkacy’s theories of “pure form.” Though thus linked with traditions in Polish literature, Schaeffer’s plays stand apart from the common conception of Polish literature as specifically rooted in Polish political and social struggles. These plays engage broad questions of art and performance and a specialized knowledge of Polish history certainly is not essential to their enjoyment.

While the plays collected in this anthology offer a rich source for those looking to engage with Schaeffer’s ideas on performativity and the production of art, they are also (and perhaps more importantly) immensely enjoyable pieces of theatre. Romanska’s translations not only bring Schaeffer’s unique works to an English speaking audience, but do so in a way that preserves the rhythm, humor, and linguistic play of the originals. They are a pleasure to read and frequently offer irreverent, surprising, and entertaining perspectives on contemporary art.

My only disappointment in reading these plays was that the text alone is unable to fully capture what I imagine is the experience of the work in performance. Though Romanska’s introduction “sets the stage” and her translations capture the humor and linguistic play that animate the drama, it can feel at times like reading Schaeffer’s plays is akin to studying the score of a John Cage composition–something is lost outside the context of staged performance. For work so engaged with the action of performance and staging, solitary reading feels like an incomplete experience. This is, of course, not a comment on this volume, but rather a hope that these new translations will inspire productions of Schaeffer’s work and bring these fascinating plays to life for a broader audience.

This post originally appeared on the Cosmopolitan Review on June 25, 2013, and has been reposted with permission.