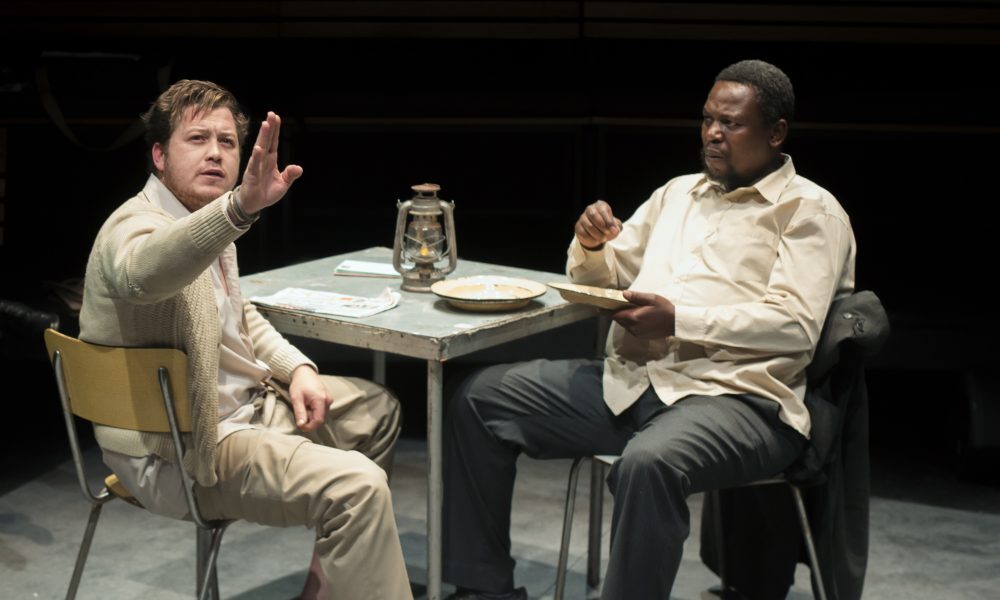 Blood Knot, by legendary South African playwright Athol Fugard, which ran at the Market Theatre in November, had its first and only showing on September 3rd 1961, in what was described as a “makeshift theatre” hastily put together inside an old factory building in Johannesburg.

It featured Athol Fugard himself in the role of Morris whilst Zakes Mokae–who later went on to have an illustrious theatre, television and film acting career first in the UK and then in America where he eventually settled–played Zachariah. It is said that this was the first time a theatre production had featured a multi-racial cast, something which was outlawed by the apartheid authorities, which could be the reason it is one of a few plays which has the odd record of having a “single-performance premiere.”

Blood Knot is a story of two brothers, one being lighter whilst the other being darker in complexion, and how they try to navigate the absurdities and complexities of life under apartheid. In so doing they contemplate their disparate realities and ironic trajectories of their lives, which being brothers should not necessarily have been different, but due to the apartheid policies of the time, are starkly dissimilar. It is also a story about identity, desire, passion, love and much more, and has elements of theatrical or dramatic role-play, which become all too real with each brother’s innermost thoughts, which lead to further conflict are laid bare.

The current iteration at the Market Theatre features supremely talented maestro Mncedisi Shabangu and the equally brilliant Francois Jacobs and is directed by James Ngcobo. The two actors are electric and spectacular as they bring to life these two colorful characters and tell this more than 60-year-old human story, one which is tragic and sobering, and which is a reminder of the devastating impact of apartheid race classification, and its associated inequalities which wreaked havoc on those who they were designed and engineered to oppress.

Blood Knot is (still) searing and unrelenting in relevance as the issues it brought to sharp focus then are still as pertinent now, albeit existing under different guises more than two decades after the ushering in of a new democratic order in South Africa.

Blood Knot follows in the tradition of classic Fugardian plays such as No-Good Friday (1958), Nongogo (1959), Sizwe Banzi Is Dead (1972), The Island (1973), People Are Living There (1969), and Statements After an Arrest Under the Immorality Act (1972) among others which highlight the (black) human condition and articulate life in a way which made apartheid authorities uncomfortable to a point that they would regularly impose restrictions on the performances, as well as on the playwright and the actors. A case in point was when the BBC filmed Blood Knot in 1967 and Fugard’s passport was confiscated shortly afterwards. Blood Knot was performed as part of the Market Theatre’s 45th year celebrations with the production dedicated to the memory of the late Zakes Mokae, who as one of Athol Fugard’s earliest collaborators was instrumental in the kind of theatre Athol Fugard would come to be known for.

Later, Fugard creative collaborators would include John Kani and Winston Ntshona, who famously developed through a workshopping process The Island and Sizwe Banzi Is Dead in 1972. Fugard has continued to write, though with less frequency due to old age, but his plays are regularly performed both locally and abroad, as well as being prescribed drama set books for study by high school students.

Blood Knot was written by Athol Fugard and directed by James Ngcobo. It featured Mncedisi Shabangu and Francois Jacobs. Lighting Design was by Mannie Manim, Props & Set Design by Nadya Cohen, Costume Design by Noluthando Lobese, Sound Scaping & Design by Dean Pitman, Voice Coaching by Sipho Zakwe, Lighting implementation by Luyanda Somkence and Stage Management by Zandile Mawane. It was on at the Market Theatre in Johannesburg from 15 October – 14 November 2021.

This article was originally published by The African Theatre Magazine on December 19th, 2021, and has been reposted with permission. To read the original article, click here.