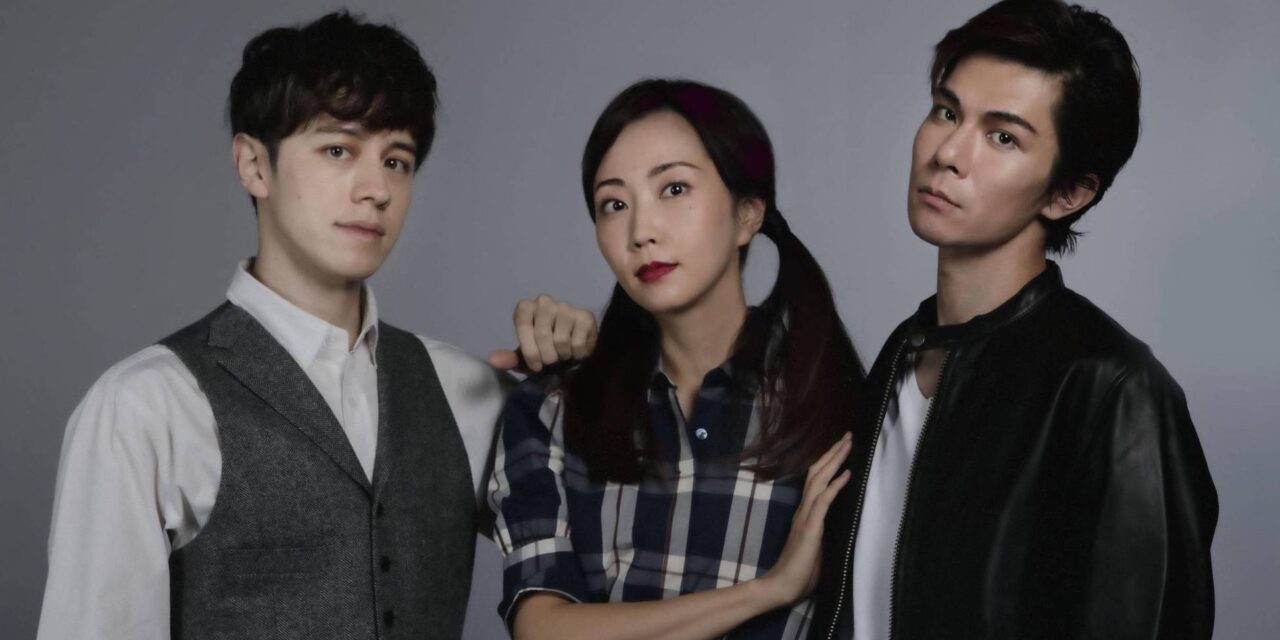 From left: Eiji Wentz, Haruka Kinami and Hayato Kakizawa bonded over meals and shopping in Paris years before starring together in an all-Japanese production of Willy Russell's “Blood Brothers.” |

It’s an age-old question: Which is more important in determining the course of our lives, nature or nurture? Actors Hayato Kakizawa and Eiji Wentz grapple with this absorbing issue in the musical Blood Brothers, which kicked off its eighth all-Japanese production on March 21 and will run until April 3 at Tokyo International Forum.

Written by English playwright Willy Russell, Blood Brothers traces the checkered lives of a pair of fraternal twins who are separated at birth, and it has long been a favorite among musical lovers. It first ran from 1983 to 2012 in London’s West End, winning an Olivier Award in its opening season and becoming the third longest-running musical there, after Les Miserables and The Phantom of the Opera. It premiered in Tokyo with an all-Japanese cast in 1991 and has had multiple reruns featuring fresh cast members.

Set in the hardscrabble city of Liverpool in the 1960s, the story — often described as “a Liverpudlian folk opera” — centers on Eddie (Wentz), who is adopted by a wealthy family, and Mickey (Kakizawa), who is raised in poverty by a single mother with numerous other children.

The brothers meet by chance when they are 8 years old, and soon become best friends — without any idea that they are related, let alone twins. Although they lose contact when Eddie’s family moves away, they are brought together by coincidence once again and resume their close friendship. By this time, the boys are teenagers and both fall in love with Linda (Haruka Kinami), a girl they have known since childhood. Caught up in a torrid love triangle, the two friends’ vastly different social circumstances lead them to react in ways that ultimately result in tragic consequences.

“This musical is quite simple, with no gorgeous sets or costumes. So we can’t hide anything with visual effects, and it really demands each actor’s power,” Kakizawa, 34, says, adding that playing their characters as 8-year-olds is particularly demanding. “But we give it our all. The audience will get lots of unforgettable things from this simple story.”

Wentz, 36, agrees that the musical carries an emotional weight unlike other more lighthearted productions. “It has a rawness,” he says. “It portrays a desperate struggle to live without hiding it, and it shows the harsh truth that destiny sometimes snatches away hope in front of our eyes and plunges us into despair.”

That doesn’t mean, however, that audiences will leave the performance feeling depressed or hopeless. According to Wentz, despite the difficult choices the characters make because of their bleak reality, they show an appreciation for intimate connections and small joys.

“To be honest, I think people in today’s society are much less likely to be appreciative in their daily lives like Mickey’s family,” he says. “That’s something we’ve lost in terms of close human relationships today. I think Japanese audiences will enjoy seeing this English society, where people are really involved in each other’s lives.”

While the roles themselves require a lot of energy from the two leads, the pair have an easy camaraderie that stems from a touch of serendipity that solidified their friendship before they signed on to Blood Brothers. Wentz and Kakizawa were first paired together on stage in 2017, when they played the same role in the all-Japanese double cast of A Gentleman’s Guide to Love and Murder.

Afterward, Wentz took an 18-month break from Japan’s entertainment world to study drama in London. It so happened that Kakizawa and Kinami were also striking out abroad around the same time.

“I was acting in Paris in 2019 in the late Yukio Ninagawa’s wonderful adaptation of Haruki Murakami’s novel ‘Kafka on the Shore,’” Kakizawa recalls. “Wentz was living in London, and I’d always respected his brave decision to leave Japan and go there.

“He came over to see ‘Kafka’ — and as Kinami was also in the cast, the three of us went out shopping and eating together in Paris without knowing we would all be acting in ‘Blood Brothers’ before long.”

Their friendship lends well to their characters’ close relationship as unwitting twins. “I’m on stage first, and I’m alone for a while and actually waiting for him to appear because I feel at ease when he’s there,” Kakizawa says. “I enjoy every moment of being on stage with him.”

When asked about the play’s central theme of nature versus nurture, the two leads say their lives have been determined by both. Indeed, psychology professor Lisa Feldman Barrett recently wrote in The Guardian that “there need be no ‘versus’ in the equation. We simply have the kind of nature that requires nurture, and they are utterly intertwined.”

Wentz, who has an American father but was raised in Japan, says his time living abroad to get in touch with his European roots greatly affected him.

“While in London, I realized there are many different ways of expressing yourself. I was also pleased to learn that being different from others is a great thing and that people there tend to enjoy those differences rather than criticize them,” he says. “I grew up in Japan learning to value teamwork, so I think people here hesitate to be different from the majority. The fresh perspective I got over there opened up my heart and made a big impact on me.”

Though he admits with a laugh that he has since reacclimated to Japanese society’s more harmonious style, he believes his London experience played a huge part in taking on the role of Eddie.

“If I hadn’t gone abroad, and hadn’t seen Kakizawa and Kinami’s performance in Paris and spent time with them, I’m not sure that I would be in this rehearsal room now,” he says. “Clearly, these are my life decisions, so it’s my nurture. But nature and nurture actually got very entangled in my case.”

Kakizawa, whose grandfather was a performer from a well-known family of kabuki musicians, agrees that nature and nurture have both played a part in his life.

“I’ve always thought nurture makes the person’s life and they create their environment,” he says. “Now, however, I’ve reflected on how I was born into a famous family and grew up with traditional performing artists. Yet for a while, I wanted to be a professional soccer player — at least until I saw the ‘The Lion King’ musical and decided to become a stage actor.”

If Wentz and Kakizawa’s experiences are any indication, just as Mickey and Eddie’s lives and fates are linked by their inexplicable bond as brothers, our nature and nurture are intimately entwined in who we become.

This article was originally posted on The Japan Times on March 24, 2022 and has been reposted with permission. To read the original article, click here.