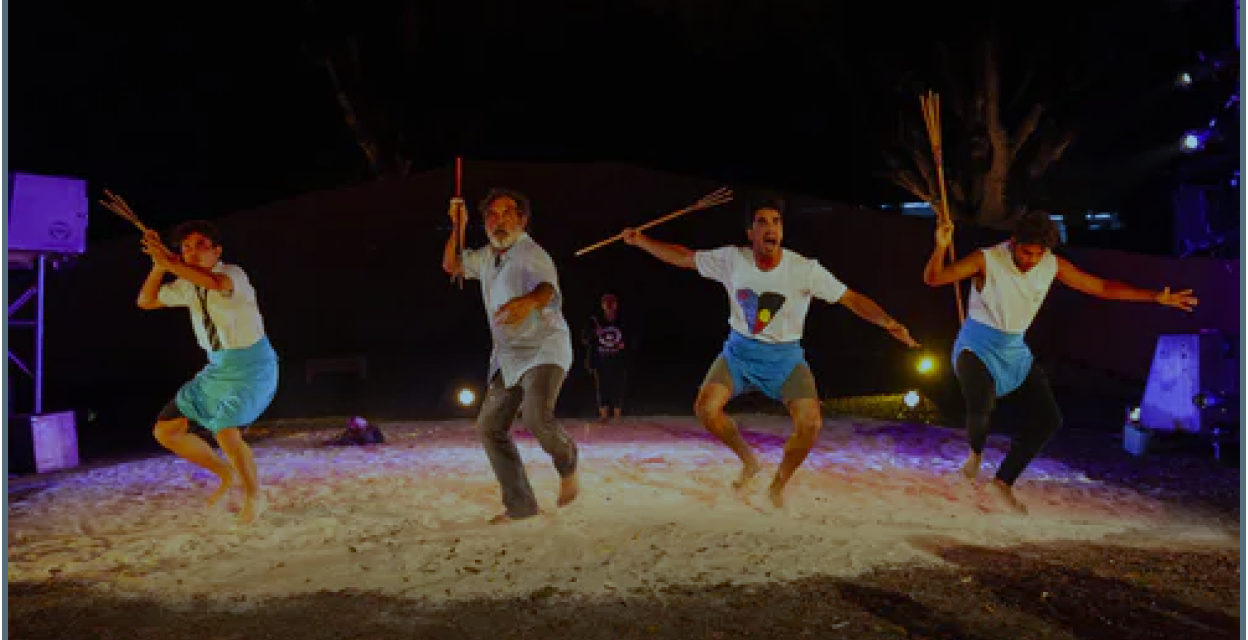 Nardi Simpson’s debut play Black Drop Effect is the “immersive” experience the Sydney Festival program promises. Sitting in the stalls, as the sky darkened behind the outdoor stage, I was immersed in the present moment, in January 2020, and in the past too.

Simpson’s funny, tender and provocative dialogue infuses her narrative with layers of history – of place and ancestral knowledge, of encounter at Kamay (Botany Bay) 250 years ago, and of colonial commemorations and performances.

Her characters turn a fraught Aboriginal dance performance on January 26th into a chance to listen and share knowledge. And ultimately, the dance group has a few lessons to teach about who can control culture, how history can be memorialized, and by whom.

In the accompanying program, Simpson (also a composer, singer-songwriter and performer) suggests this work is “one verse in an ongoing song.” Black Drop Effect and the rich array of Indigenous productions in this Sydney Festival build on Aboriginal and Torres Strait Islander performances at commemorative events throughout Australia’s history.

The production was prompted by festival director Wesley Enoch’s call to Aboriginal and Torres Strait Islander artists to be ready for 2020. Some smart programming from Enoch launches a conversation that will heat up as the April 29th anniversary of Cook’s landing approaches.

The last time a Cook anniversary was commemorated on a large scale was 1970. At those events, Aboriginal actors led by Noongar performer Ken Colbung (Nundjan Djiridjarkan) performed the kind of reenactment Black Drop Effect dramatizes in front of 20,000 Sydneysiders.

Queen Elizabeth II arrived by sea, just as Cook had done, approaching the shore on the royal barge. As she neared, distant clap stick beats were heard, accompanying the official commentary and reminding viewers Aboriginal people were still there, as they had been when that other boat approached 200 years earlier. The site of Cook’s landing has seen commemorations and protests. Jenny Evans/AAP

Across the Bay at (Guriwal) La Perouse, Aboriginal protesters threw wreaths into the water to commemorate the invasion. They were joined in protests across the nation.

At Sydney Airport the Queen was greeted with Aboriginal people in funeral dress. Elsewhere there was a torchlight procession to Canberra’s Parliament House, a costumed silent vigil in Brisbane, a March through Melbourne, a mourning demonstration in South Australia and a funerary procession in Perth.

Taking poetic license with history, new British immigrants bearing the surname Cook or Cooks were recruited in the 1970 commemorations. On April 30, 1970, the Tamworth Leader reported that “Too many Cooks” arrived in Sydney on a flight landing at Mascot airport, close to Cook’s landing spot.

In 2019, Prime Minister Scott Morrison announced a replica of Cook’s ship Endeavour would circumnavigate Australia (even though the original Endeavour never made such a journey).

Anniversaries of the First Fleet’s landing in 1788 have also been repeatedly commemorated. In 1938 (150 years) Ngiyampaa and Paakantji residents of Menindee Aboriginal Reserve were brought down to Sydney under duress to perform a reenactment. Many of their own family members joined the group staging a Day of Mourning protest through Sydney streets nearby.

In 1963 (175 years) a Pageant of Nationhood was performed for the Queen featuring non-Indigenous dancers in blackface in Burragorang Dreamtime, the brainchild of choreographer Beth Dean and composer John Antill.

Talking back to Cook

Black Drop Effect holds in tension these complex histories of Aboriginal responses to commemoration, making space for protest, reclamation of culture and cross-cultural negotiations. It is a productive response to our times that brings together a cohesive creative team.

Lucy Simpson’s evocative visual designs, with video by Mic Gruchy and lighting by Karen Norris, bring to life themes in the narrative. Swirling stingray and cockatoo projections and watery backgrounds move across a screen, waft through the trees and onto the sand under the actors’ feet. Matt Doyle’s vital choreography is underpinned by James Henry’s sound design, combining song fragments with electro beats and clap stick rhythms in extended time signatures.

Director Felix Cross creatively navigates the challenges of Bankstown Arts Centre’s courtyard and its proximity to the train line. The impressive cast never forgets where their performances are happening, intermittently turning their gaze trainwards. The passing trains play a role in the drama, pausing the action or comically highlighting Anthony Hunt’s Cook portrayal and blustering refusal to let place disrupt his monologue. A strong cast anchors this eloquent debut work with performances that are both comic and poignant. Christopher Woe/Sydney Festival

The language of the Gweagal warriors who confronted Cook’s party with “Warra warra wai” also makes a powerful appearance — translated in Simpson’s script as “Go away!”

Black Drop Effect challenges, but it also brings people in, inviting us to listen, feel and rethink what it means for Indigenous Australians to remember Cook’s visit after 250 years. Enoch’s Sydney Festival gives us plenty to think about as 26 January and 29 April 2020 approach.

This article was originally posted at theconversation.com/  on January 16th, 2020, and has been reposted with permission. To read the original article, click here.