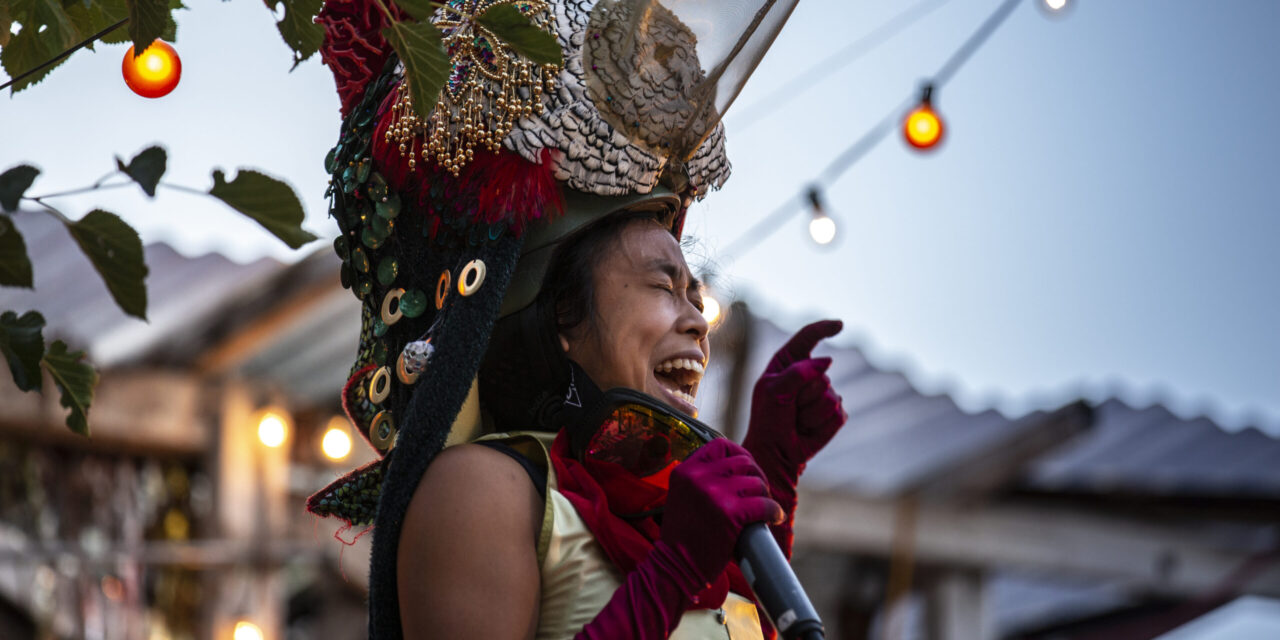 Ever since the quarantine began, a joke has been circulating throughout critical discourse—ok, on Twitter—about the literature that will emerge a year, five years, a decade from now: post-dystopian texts that will necessarily substitute mundanity for drama. In the frustration of living through this pandemic, especially given the United States’ slow crawl toward responsibility, we might well dread the future works of art that will attempt depict this time. A play about my Covid reality, for example, would have the heroine painting her nails every night, and peeling the polish off with her teeth every morning. Gripping stuff.

But of course, realism is not the only reasonable response and not all artists need to wait a year or ten. In Beast Visit, a kooky new production from the theater company the Drunkard’s Wife, we’re treated to an inventive and resonant interpretation of life under quarantine. The Drunkard’s Wife is helmed by Normandy Sherwood who wrote, directed, and designed the show, and Craig Flanagin who composed the music. Sherwood and Flanagin share a vision, but they have very different approaches; the rag bin aesthetic of Sherwood’s handmade costumes create a charming “Let’s put on a show” summer camp vibe, while Flanagin’s droney music is otherworldly. Setting the show in Bushwick’s Rubulad garden, where a resident black cat sauntered nonchalantly across the stage during the performance, is a perfect synthesis of both vibes.

With Beast Visit, Sherwood has created a work that is almost a contradiction in terms: it’s a medieval-style allegory about our contemporary moment. The quarantine, not to be confused with the pandemic as such, has made beasts of us. The play doesn’t deal with sickness, but with stuckness. Divorced from society, we are reduced to our barest needs and basest urges. There are class issues at play: those privileged few with options have opted out, “quarantining” instead at, for example, their parents’ beach houses. But those of us left behind have lost recourse to distraction, forcing a crucial confrontation with the self.

Sherwood’s characters are drawn from the realms of fairy tale and fantasy. The wide-eyed and funny Daniel Allen Nelson is an impresario who welcomes us to the beasts’ lair. Braulio Cruz swans as the Loneliest Beast whose current lifestyle is a pitiful imitation of his former decadence. Be aware of the set, some of which houses, or is, a living beast. Blaze Ferrer plays Baba Yaga’s chicken-legged domicile, truly such a captivating figure who is semi-alive but never presented as a character, with the timing and intonation of a Brooklyn comedian. But the show is stolen by Nikki Calonge who plays the Cockatrice as your favorite bad influence friend, with reckless abandon and magnetic intensity. Alone together indefinitely, these beasts have given in to their worst habits. One could well imagine another monster, one who paints a fresh canvas each day, only to shred it tomorrow.

The production is part of HERE Art Center’s #stillHERE: IRL, an initiative from New York’s SoHo theatre company dedicated to creating live arts experiences that can be enjoyed while maintaining social distancing. The Drunkard’s Wife accomplishes this with cute and creative measures, such as souvenir facemasks hand-sewn by Sherwood, and audience costuming that keeps the audience members from getting too close to each other or the performers. You are made to stand the whole time which I’m not sure is quite necessary or effective. Some wrought iron garden furniture would both keep you in place and add to the impression that we’re on a garden visit to the beasts’ home. But then again, we’re all sitting more than enough these days. Do avail yourself of all protective materials on offer, including hand sanitizer, bug spray, and cocktails.

In his essay The Animal That Therefore I Am, Jacques Derrida defines the human being as “that animal at unease with itself.” Uneasy, he means, with our very animal nature. But what if humanity is just the sum total of our diversions? Unable to lose ourselves any longer at parties, in theaters, or on vacation, the monotony might unleash the beast in each of us. Or it might create the opportunity to finally ask, who am I, and how different is that person from who I want to be?