“Baghdaddy” at the Royal Court

What is the best way of talking about the Middle East? Should plays take a documentary or verbatim approach, all the better to educate and inform, or is there another path, which includes entertainment, and that magic ingredient called theatricality?

At the Royal Court the imaginative way has recently been explored in plays such as Sabrina Mahfouz’s dreamy A History of Water in the Middle East. Now, Jasmine Naziha Jones’s debut play, Baghdaddy, in which she also stars, also gets the magic realist treatment. But how successful is it?

Beginning in 1991, this coming of age story is seen through the eyes of Darlee, an eight-year-old girl whose Dad is Iraqi, living in London. Her mother, who is presumably British, is oddly absent from the story. When news breaks of the first Gulf War, which starts with Saddam Hussein’s 1990 invasion of Kuwait and continues with the American-led Operation Desert Storm and the expulsion of the Iraqi army, they are celebrating her birthday in a McDonald’s, symbol of American neo-imperialism — which, as much as Saddam’s murderous regime, is the big bad daddy of the play.

Taking a fragmented form, which mixes Darlee’s memories of her childhood with a comic account of her father’s arrival and student life in England in the 1980s before she was born, the story is haunted by news of the Iran–Iraq war of that decade, the subsequent Gulf war and the invasion of Iraq in 2003, which toppled Saddam and led to the formation of Islamic State. Although much of this happens at a distance, Dad is deeply involved because his brother, in Iraq, is caught up in the conflicts, and Dad travels to Jordan and Syria to help raise money for his family (given the dictatorial regime, it is too dangerous for him to return).

In the magic-realist world of the play, which arrives with the crash-bangs of bombs exploding and the sound of Flanagan and Allen’s “Run Rabbit Run,” the horrible feelings of fear mix, not always easily, with laughter and clowning. Three spiritual companions, two Qareens and a Jinn, lead Darlee from childhood to her early 20s, acting as storytellers, jokers and chorus. Although this is a thrillingly imaginative conceit, a lot of what they say is flatly banal and often redundant. At worst, their dialogues are irritatingly over-explanatory.

Elsewhere, Naziha Jones’s text has a wonderfully helter-skelter sensibility, although a good editor would have done her the favor of trimming some of the unnecessary passages. In her nightmarish scenarios, there are satires on English attitudes to foreigners, caricatures of Iraqis and Saudis, moments of pop culture humor and incidents of violence. Thoughts of a brutal assault on her father, and the death of her uncle, invade Darlee’s mind, as much as a negative memory of hearing Holst’s Mars music. Although the self-referential asides about the difference between dreams and reality are awkward, the sense that fear has a pungent smell and that unspoken trauma pollutes family relationships come across strongly.

In the world created by Naziha Jones, Dad’s psychological distress — partly caused by guilt at his distance (3,320 miles away to be precise) from his family’s terrors — is absorbed by Darlee in kind of grim psychic inheritance. By the end of the play, she uses the occasion of a university interview to vent her anger. This is directed more at American sanctions against her father’s country than at Saddam’s regime, but its hectoring lecture-like tone feels overly didactic. I winced. By contrast, this is followed by Dad’s more successful long monologue, in the form of a rhyming poem, about the act of crying.

At best Baghdaddy is a surreal trip into traumatic memory, at its worst it’s a self-indulgent mess. If you think that American crimes are worse than Saddam’s you’ll love this show; if you like playwrights wagging their finger at you, you’ll love this show; if you believe that parental trauma can be inherited and then self-consciously joked about, you’ll love this show. Either way, the play does make you feel, and Dad and Darlee’s relationship does have its moving moments. Memorable aspects of Milli Bhatia’s production are the brief musical numbers and the cartoonish feel of Moi Tran’s design, with its cool Middle-Eastern-style set and lurid costumes.

Naziha Jones’s Darlee has an attractive mix of childhood sulkiness, youthful bewilderment and punk aggression, while Philip Arditti’s Dad dominates the stage with his heartfelt presence, being the emotional center of the hallucinatory events happening around him. Souad Faress, Hayat Kamille and Noof Ousellam are the clowning spirits whose comic antics sometimes amuse, but are occasionally tedious. In the bright, vividly coloured kaleidoscopic world of Baghdaddy the mix of fun and fear, of shame and sadness, create the playwright’s ironic sense of “commercially viable pain.” Yes, the show also criticizes itself. But even if it’s not completely successful, it’s a strong debut.

This article was originally published by Aleks Sierz on November 25, 2022, and has been reposted with permission. To read the original article, click here. 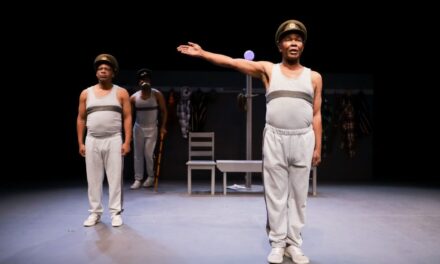 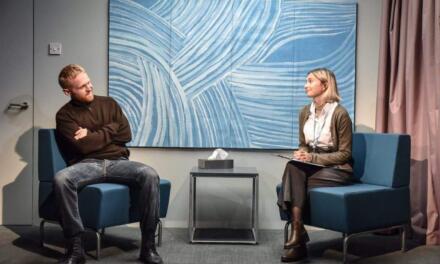