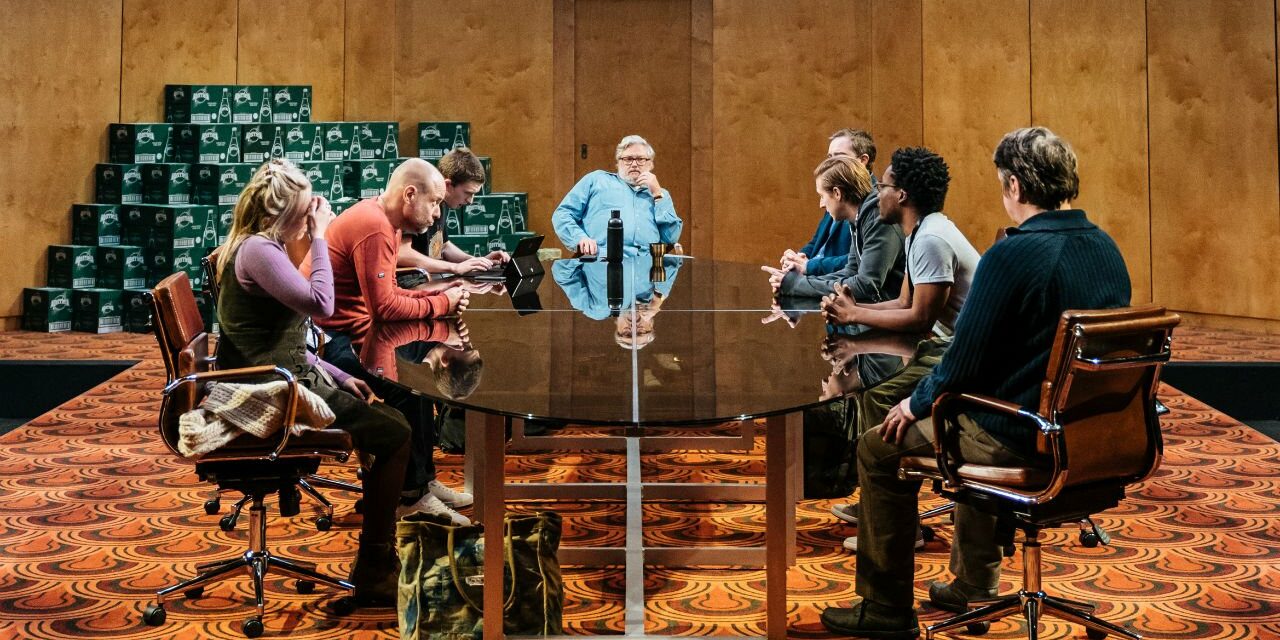 The cast of "The Antipodes" at the National Theatre. Photo: Manuel Harlan

“Wily, slippery thing.” “Spiky little animal.” “One long nightmare.” These are the phrases that Annie Baker conjures up to describe her latest play at a pre-show talk at the National Theatre. And it is fitting that The Antipodes should evoke images of phantasmagoric otherness, since its estranged realism delectably lends itself to ample talk about monsters both literal and metaphorical.

By the looks of it, however, one wouldn’t expect things to take such a turn. The Dorfman stage has been transformed into a windowless conference room with rustic, earthy colors and a tinge of the Kubrickian uncanny. At its center stands a boardroom table surrounded by revolving chairs, and an outrageous heap of Perrier boxes occupies a corner at the back. An oval-shaped strip light hangs over the table, suspended from an elaborate ceiling of concentric circles. This refined scenic design, at once intensely specific and beguilingly non-localized, belongs to Chloe Lamford, who co-directs the play with Baker over two years after its premiere at New York’s Signature Theatre. As in Baker’s previous work, the setting is part and parcel of the world of The Antipodes, as powerful a presence as any of the characters: this benevolently formal room will come to be regarded as a sacred space where personal demons can be outed, and where former outings can be turned into, and shared as, stories.

Seated around the table is a group of eight creative types who have been employed to work on a project whose exact details we never get to learn. Their goal is to come up with a groundbreaking story that will alter its audience’s perception of time, space, causality, and narrative—among much else. And they attempt to reach this goal by sharing their personal stories, ranging from anecdotes of how they lost their virginity to the most tragic things that have happened to them. They rarely leave their seats, and when they do, it is for a quick trip to the Perrier stack. But time passes: days, weeks, and months go by in a flick, punctuated not by changes in lighting or sound, but by slightly stylized shifts in their posture and pose (movement direction by Sasha Milavic Davies). Story follows upon story. Every now and then, someone comes up with a theory of time or of narration. The conference room turns into a crucible of confessions and speculations—mythologies of the self and the world. 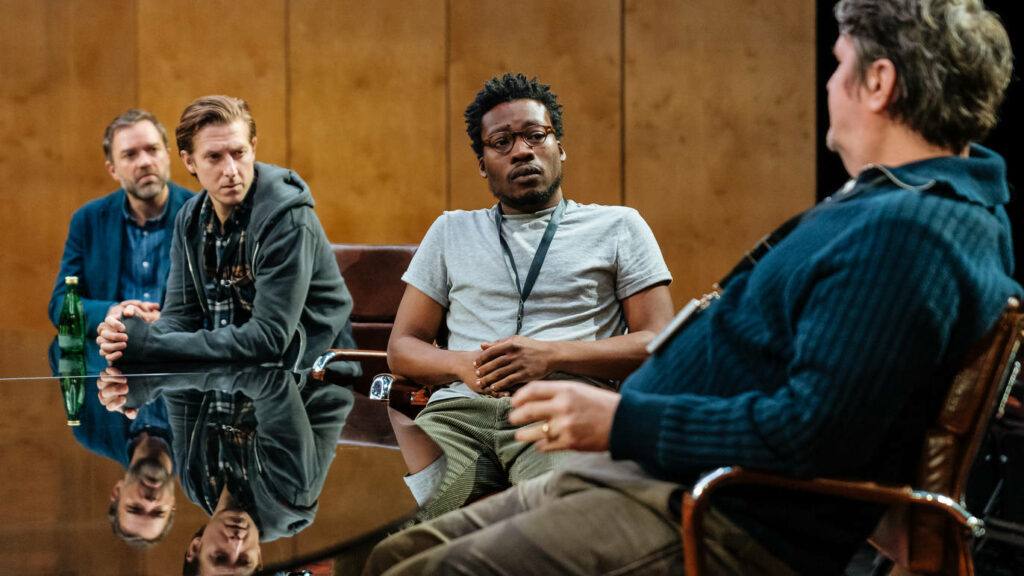 The Antipodes enacts dramaturgically what it takes as its subject: the eclectic, episodic nature of the play—with its unforeseen jumps from one story to another, from one brief scene to the next—goes hand in hand with its positively meandering preoccupation with our feeble attempts to theorize, categorize, and optimize stories. As the characters try to figure out what makes a good—nay, the best—story, or how many stories there are in the world, their own stories and experiences gradually come to demonstrate the nullity of their formulations. In a key scene, one of the characters confesses to his anxiety about the group’s endeavor: “Sometimes when I tell personal stories to you guys,” he says, “It doesn’t feel real. It feels misleading. […] I’ve always felt like my personal life is the part of my life that I don’t want to turn into a story.”

In The Antipodes, Baker meditates on this paradox: we can’t live, or live meaningfully, without telling stories, but any story, however truthful, is also an exercise in self-fashioning, self-fabrication. Given their ubiquitous and variously deceptive nature, our stories weave an alternate reality—like the titular antipodes, a place on the other side of the world where monsters of our own making enact their own dramas. No wonder, then, that towards the play’s end, a radically reimagined creation myth identifies the act of storytelling as the original sin. Yet even as The Antipodes puts pressure on the seemingly transparent connection between story and storyteller, and interrogates the limits of what a (good) story can be and what it can do in the world, it does not deride our human attachment to stories, our ultimate need for them.

After all, the play itself tells a story—a magnetic one whose structure, rhythm, and scope are surprisingly similar to many of the tales relayed by its own characters. And just as those tales do not often behave themselves, reaching fantastically bizarre heights or cooling down in ostensibly lackluster ways, the play elegantly fidgets between its layers of realism and surrealism, never making the audience feel safe as to what it can expect next. This might initially appear as an odd departure from Baker’s trademark naturalism, with its drawn-out silences and heightened sense of the everyday, but the ingenious ways in which the play swerves from our presumptions of the real and the rational end up contributing to its discourse on the aims and mechanics of storytelling. It is clear why Baker, during the same talk, has also described The Antipodes as being about “the stories we tell about the stories we tell about the stories we tell.” Layers upon layers—and the result is a rich, satisfying tapestry of questions and provocations.

Rest assured that the play’s dramaturgical and thematic rigor does not feel contrived or self-imposingly heavy in performance. From start to finish, it’s all nimble, relaxed, and occasionally tender. Baker and Lamford’s direction has a clearly unified force that handles the play’s polyphonic rhythm and hiccupy structure with patience and care. The only major issue concerns their in-the-round staging, where those seated on the sides are considerably barred from seeing some of the actors’ faces for long periods, though the play’s second half mostly does away with this problem by dispersing the actors across riveting tableaus. Tom Gibbons’ nearly inaudible sound design injects static unease into particularly tense moments, while Natasha Chivers’ lighting aptly captures the room’s eerie constancy, most powerfully in a very dim scene near the end. 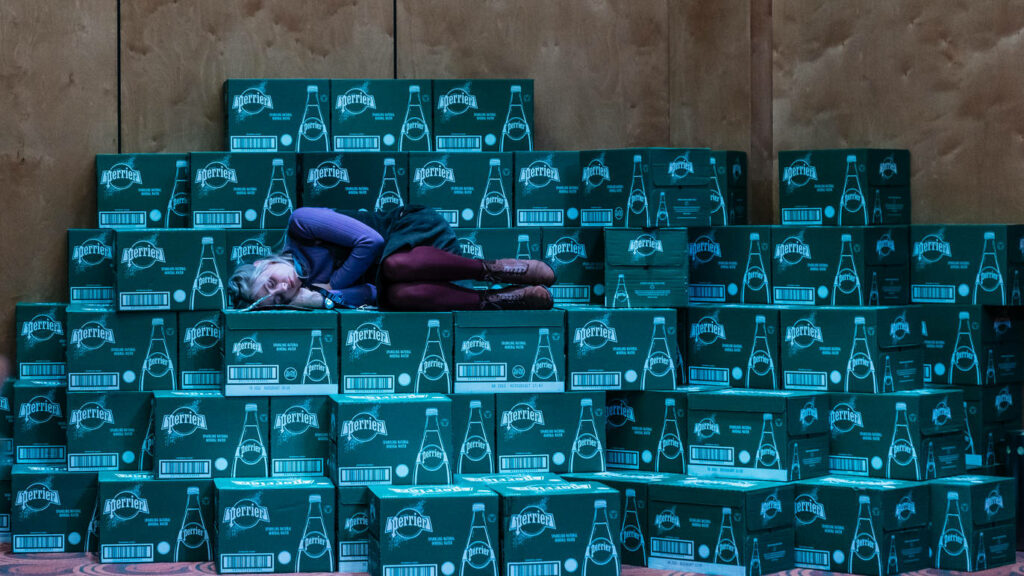 No account of this slyly gripping production would be complete without applauding the altogether fascinating ensemble. All nine actors approach Baker’s elusive characters with firm but gentle hands. In a play where much of the characterization depends on the sharing of dubious personal stories, adding nuance and distinction to each of these coworkers would be a challenging task—but with this cast in place, it proves to be no problem. Sinéad Matthews gives a particularly intricate performance as the demurely vivacious Eleanor, who happens to be the only woman in the room. (The gender politics of the play become increasingly relevant.) One of the most cryptic characters is the secretary Sarah, who is impressively brought to life by Imogen Doel with playful confidence and wicked humor. Her ever-changing jumpsuits and rompers, designed by Lamford, add yet another layer of stylish mystique to her performance. The remainder of the cast—especially Matt Bardock, Arthur Darvill, Hadley Fraser, and Conleth Hill—are consistently strong in both their extended monologues (full of icky, shocking details) and their casual, but charged, chatter with one another.

The Antipodes begins with an imperative: “No dwarves or elves or trolls.” But at the very end, there stands a troll figurine on the table. It’s an arc that encapsulates something essential about what this bewitchingly smart play is asking us to ponder. Stories will not always play by our rules, accede to our demands, or respect our borders. They can be both reckless and mild, attractive and alienating. As a story (unto) itself, Baker’s play embodies these contrasting strands with exceptional finesse. You would do well to step into this boardroom, open a bottle of Perrier, and lend her all your attention.