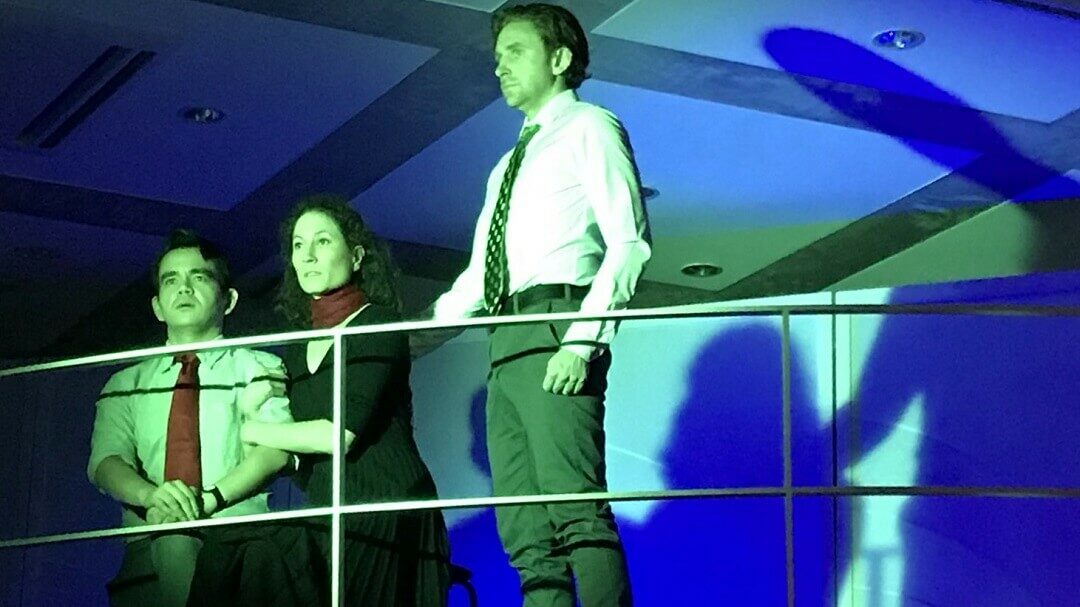 Disturbance is an original musical, making its world premiere in Tokyo this month. We spoke with the show’s producer-composer Mark Ferris about what to expect from this bold production and its plans for the future.

This is hardly surprising given he’s collaborated with lyricist Tim Rice (Jesus Christ Superstar, Evita), composer Alan Menkin (Aladdin) and was an early investor in hits such as Kinky Boots.

Oh, and there’s also the Tony Award he won last year as co-producer for “Once On This Island”.

“I’m from a musical family. Mum was a violinist and Dad played some piano. I always had an interest in musical theatre, and really enjoyed those shows. Then when I learned piano, I got into composing and it was just something I kept doing.”

So, from such humble beginnings, how did Ferris find himself working with the likes of Rice and Menken?

“In the mid-2000s I was fortunate to meet Tim Rice through some charity work. Among other things, he helped me get an album together, on which he, Alan Menken and myself contributed songs. So, I got to rub shoulders with greatness, albeit as the very junior partner.”

Later, when Rice was seeking investors for his musical adaptation of “From Here To Eternity”, Ferris decided to help out and invested in the show.

“I was suddenly involved in a West End show, so that was hugely exciting. And then I met people on the other side of the Atlantic, Broadway, who said ‘well if you want to do that kind of thing, there’s plenty here for you.”

Which is how Ferris ended up investing in some of the biggest musicals in the world.

And winning a Tony.

“The idea of getting the right people together, planning, taking risks, I like thinking about that. I like to do bold projects and I think Disturbance is in that category.”

Disturbance is his latest project and is based on an award-winning book of poetry by Ivy Alvarez. It’s a novel in verse that documents the real-life homicide of a UK family gunned down by their husband and father.

“In Australia, I collaborated with a feminist writer and wrote music for her poetry. Afterward, she introduced me to Ivy’s book and said, ‘we should do this’. So, I went and bought the book and was gripped by it from the first page.”

Almost immediately, Ferris began thinking about how the material could be approached from a musical standpoint.

“It was challenging but exciting for a couple of reasons. One is that we tend to think of domestic violence as a perpetrator and a victim, but Ivy’s thesis is that as well as the immediate family who’s affected, there’s also the less immediate family such as in-laws and cousins. Then there are friends. Neighbors. The neighbors of the neighbors. The social workers. The police. The coroner. The real estate agent. And what’s brilliant is that Ivy poses the question of how complicit we all are in things unfolding around us to which we deliberately turn a blind eye. And that was a concept that made the musical exploration interesting.”

As soon as Ferris knew he wanted to adapt Alvarez’s work into a musical, the first thing he did was reach out to her.

“I’d learned through Broadway not to go down the path of investing in someone else’s work to find that one day they say ‘oh, actually I don’t want to do this’. So, I engaged Ivy early and said, ‘would you be open to an adaptation of your work’ and she said ‘sure, I’d love to.”

Ferris made it clear that the process of adapting Alvarez’s material would require “slicing it and dicing it” to create a stage version of her poetry.

“Ivy’s been very supportive and understands what we’re doing. I think she’s coming over for the production which is very exciting.”

So, given Ferris lives in Australia, and Alvarez, New Zealand, how did Disturbance end up with a Japanese world premiere?

“Honestly, if your director’s Rachel and she’s in Japan, you do it in Japan.”

‘Rachel’ is Rachel Walzer, one of Tokyo’s most renowned theatre directors who Ferris knew from his time living here.

Walzer, who among her many roles has been Vice President of Tokyo International Players and the Artistic Director of Black Stripe Theater was, according to Ferris, a natural fit for the project.

“I approached Rachel in December last year and said ‘this is what I’d like to do’ and luckily she was open to it.”

But it wasn’t just directing Walzer was signing up for. The responsibility of adapting Ivarez’s poetry into a stage play has also fallen to her.

“She and I think differently, which is a good thing” Ferris explains when talking about their working relationship.

And how’s it all come together?

“What makes our project interesting is it’s being developed rehearsal to rehearsal. Only in the last couple of weeks have we got a script. The characterization has also been a work in progress, very much built around the cast. It’s a bold work, but it’s also a developmental work. And that’s important because my proposition to Rachel was let’s get this to July, but then we must take it further. So, we have very ambitious plans for it. I’m talking to people in San Diego, in New York, in Auckland, and in Australia about possibly presenting the work there later.”

Which was what had brought Ferris out from Australia when we sat down to chat. He was in Tokyo to not only publicize the premiere but initiate plans for the future.

“I’m thinking strategically. It’s like any business venture. You have to find supporters and sponsors who are going to want to be involved with this. It’s important someone is plotting the next phase.”

In the meantime, how cautious is he about presenting the issue of domestic violence to a Japanese audience?

“First and foremost, we’re artists who want to produce interesting and differentiated artwork. That comes before the underlying themes of the piece. So, we must present something that is quality. And I believe there’s an audience out there who’s intrigued by new work of quality. Then, there’s the issue itself, which I’m learning is a lot more prevalent in Japan than most people realize.”

Ferris came back to this idea later when we were discussing the issue of thematic sensitivity.

“We’re not crusaders on domestic violence or advocates of any position. We are principally artists who acknowledge that the underlying work is about an important issue. Today, there’s a lot of in-your-face, oversimplification of very complex issues. And what I appreciated about Ivy’s poetry is it wasn’t like that at all. When I asked Ivy what she had wanted her readers to feel she said, ‘I trust that my readers’ response will be the right one, even if it surprises me.’ I think that’s a very mature artistic approach and it’s how I feel about the musical adaptation too.”

TAKING IT INTO REHEARSALS

Given that rehearsals started with no script, the dialogue is all poetry and the central issue is so confronting, how’s it been for the actors?

Ferris was diplomatic in his response.

“Some have really warmed to it, others have found it more challenging.” 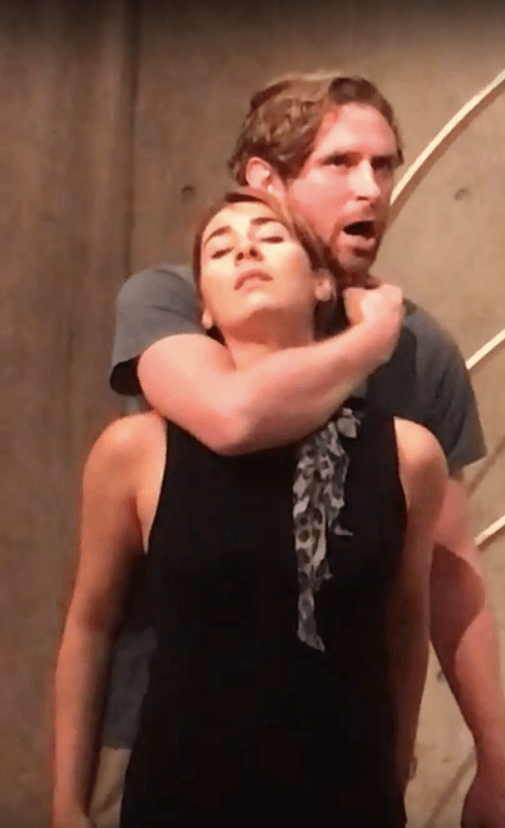 Stage manager Michelle Schovaers Wagley, whom we spoke to later and has been heavily involved in the production side, was more explanatory.

“The whole process is very collaborative, which is extremely empowering. In the end, a part of us and our ideas lives on with the future of the script and future performances. In saying that, it isn’t always fun to be working without a finalized version of a theatrical script or score, especially at the midway point of rehearsals. Workshopping at the beginning is exciting, the cast getting to delve into one’s characters and such, so it’s not necessary to have everything finalized into a script. But after the initial process is over, it becomes somewhat difficult knowing the run of the performance or how everything is going to get pieced together or how it will look and sound as a whole show. It’s taken a bit of patience to wait to see everything come together, but it has turned into something so beautiful and thought-provoking, it’s been worth the wait.”

We also asked Wagley what other production challenges they’ve had along the way.

“Turning poetry into natural-sounding dialogue and music has probably been the most difficult, but most rewarding. Rachel Walzer and Mark Ferris have worked very hard to stay consistent with the original prose of Ivy Alvarez’s book, but have created scenes, characters, and atmospheres to help guide the audience in understanding the lyrical dialogue performed on the stage. It’s also been a joy to intertwine all the poems into one fluid thru-line, workshopping each character’s relationship to one other.”

Interestingly, the decision was made to not have subtitles in the show. According to Ferris, it was the best way of preserving the integrity of Alvarez’s poetry.

“We’ve been true to the poetry and so we chose not to have subtitles. But because it’s a musical we’re hopeful the music will provide a greater level of accessibility and allow everyone to still appreciate it.”

And as the composer, how was Ferris feeling about the music now that it had been integrated into the script?

“I am particular, hopefully in a reasonable way, but I am particular about the delivery of the music. So while I’m here, I’m influencing that. Most of the cast have said they like the music, but they would have said that anyway.”

He goes on to discuss how much he’s enjoyed watching Rachel Walzer in rehearsals before summarising with:

“The thing is we can roll out the old favorites time and time again, and there’s value in that and we should do that. But when there is a new work, a world premiere, it’s meaningful, irrespective of what the outcome is. The actors know they’re participating in something new, and raw and I think they all feel they’re delivering something meaningful.”

Wagley reiterated a similar sentiment when we asked how this project differed from others she’d worked on.

“To me, theatre and art are supposed to make one contemplate or provoke feeling, and some of the best shows I’ve seen and worked on are the ones that sparked conversations and dialogue at the end of the performance, both with the audience as well as cast and crew. Disturbance does just that. And I encourage everyone who wants to experience an engaging, artistic, provocative, raw, and open musical to come see this show.”

Finally, what advice would Ferris give to others looking to produce their own theatre, be it in Japan or elsewhere?

“You have to be very honest as a producer because you have to ask yourself what is it that you want to do? It’s important to always be challenging yourself by asking why you’re doing this and what you want out of it. And that honesty allows you to act appropriately and consistently. If you haven’t worked out why you want to do something, then the road is tough. You meander along, you waste time and you probably don’t convince other people about what you’re doing.”

He thinks for a moment, before adding:

“And beyond that you need cash. Then you need some more cash.”

A consummate producer to the end.

This article was originally published by Sheepdog Theatre on June 20, 2019. Reposted with permission. Read the original here. 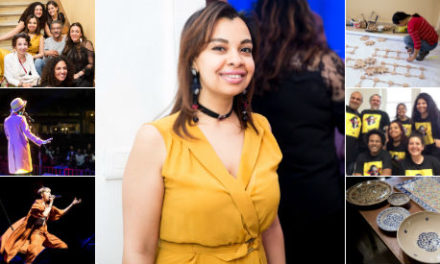