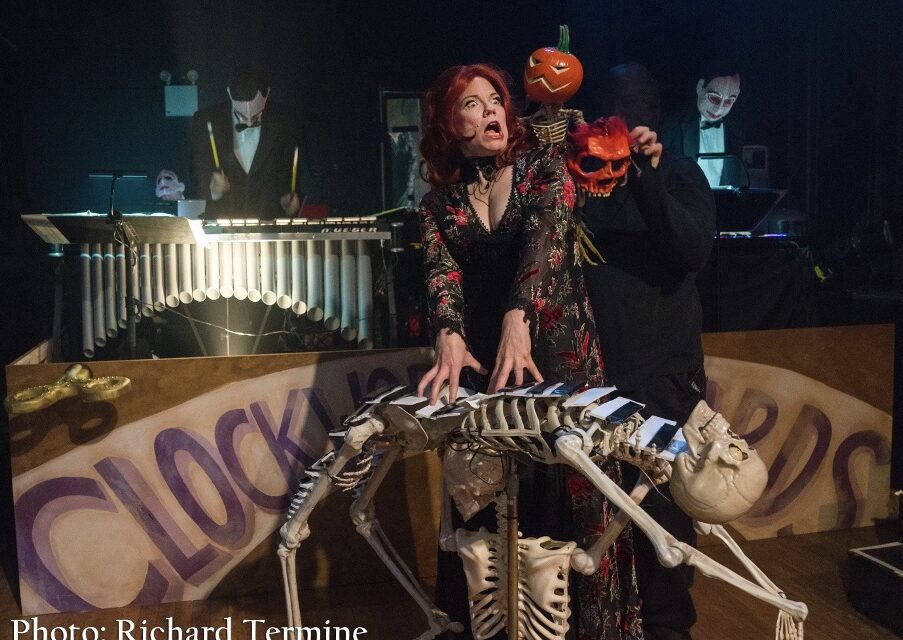 All Hallows Eve is one of those rare productions that contain all the spicy ingredients of a classic tale. Whether you choose to celebrate Halloween this year with trick-or-treating, costume parties, making jack-o’-lanterns, lighting bonfires, divination, apple bobbing, or visiting haunted attractions, All Hallows Eve includes it all.

It is packed full of great storytelling, clever and creepy music, and a bag full of tricks and treats for all ages that will haunt you for the entire year. In the 2019 version above, Writer and Director Martin P. Robinson dares us to remember that old adage “Never judge a book by its cover.” All Hallows Eve is a perfect example of what that really means. What appears to be a trick winds up a fulfilling treat. Upon first impressions, this appears to be some kind of family holiday fare. But those suspicions are quickly diminished as the musical theatre macabre unfolds. At the top of the show, the audience members follow the cast to go trick or treat around the block with sister Eve, played by Haley Jenkins, and her brother Evan, portrayed by Spencer Lott. Seeking and creating mischief on Halloween night, when they ring the bell at a creepy old mansion in the neighborhood the story escalates far beyond more than just a harmless night of “TRICK OR TREAT.”

While the audience takes it seats the kids step inside the mansion where they are greeted by their host and within seconds all hell breaks loose for the next 60 minutes of the 80-minute production. Jennifer Barnhart as The Witch burst onto the stage like an Elvira that has consumed cocktails mixed with gasoline. Barnhart ignites and continues to burn up the scenery throughout the entire production. She is packed full of wicked amusements and Mars candy bars that she hands out as rewards to her obedient servants and now her unsuspecting and captive guests.

Composer Paul Rudolph accompanies the cast through a score that is perfectly in sync with the storyline. Delightfully it is a musical score that reminds its listener that this is how musical theatre “really works”. Both Haley and Lott keep up the musical pace with Barnhart. It’s easy to fall into the charming but dark chaos that this trio creates in these roles.  Standing off to the side of the crowd after the performance, writer/ director Martin Robinson explains to me that elements of the storyline stem from his own childhood memories – a childhood we have no doubt was full of curious imagination.

All Hallows Eve takes us back, if at least for a minute to the bewilderment we felt at Halloween. We anticipate with excitement, but never know what to expect next. It inspires the adult in us to let go and be immersed in the moment. This production is a psychedelic kaleidoscope. Once it begins, it seems impossible to fathom a happy outcome, but I’ll not spoil that for you.  Making the scenes all the more fantastic is the “larger than life” and over the top imaginative puppetry designed by Robinson.  Every detail is paid attention to and seamlessly presented as if we were watching a pop-up storybook manifest before our eyes.

The audience bellowed with hearty out loud laughter because All Hallows Eve is really hysterical. It’s not just funny it’s also very clever and intelligent. In fact, if one holds the capacity for such an experience this production could be compared to a most satisfying nightmare that we’re sad to wake up from.