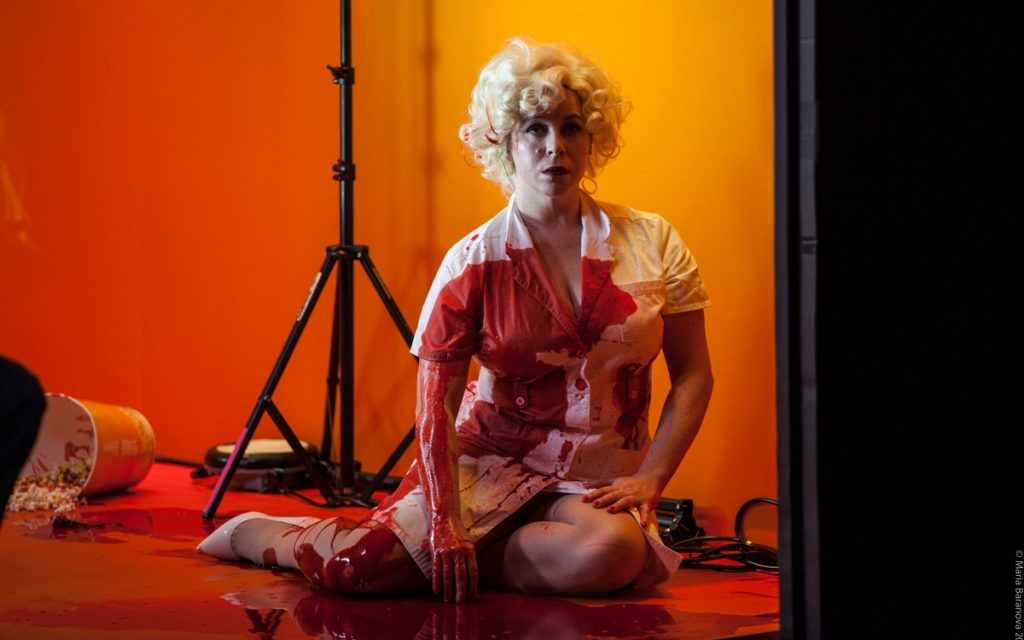 Michael Gordon, the composer, and Deborah Artman, the librettist of Acquanetta, based the opera on a three-minute scene from Captive Wild Woman, a 1940s horror movie. The potential for fun and camp of Captive Wild Woman is ruined due to the shocking way the circus animals on the set are treated. One example of many scenes of animal mistreatment is how lion and tigers, living piled together in small cages, are moved to larger cages to maul each other viscously for audience entertainment.

The three-minute scene in question features Acquanetta. According to the Playbill, Acquanetta claimed Native American roots, and yet, was promoted in Hollywood as a Latin bombshell. Acquanetta’s character Paula is turned into a monster by an evil scientist to create havoc at the circus. To become a monster, Paula’s dark skin first turns darker. She then becomes hairy. Paula becomes a monster because she is jealous of the Ringmaster’s girlfriend and wants to kill her. The very likable girlfriend is also cast as having a jealous nature—jealous of the Ringmaster’s time with Paula, and even the animals. Captive wild women!

Acquanetta restores the fragmented leading female characters in Captive Wild Woman to one whole woman. Mikalea Bennett stars as Acquanetta. Whether she or another character is singing, Bennett’s facial expressions and tense upper body (as she is swirled around in a makeup chair) channels well the dichotomy to be made up like a prop, and yet also cast as an exotic star.

Acquanetta’s music is original, urgent, and frightening—thumping, sirens, distance screams, and panicked running are frantic images that race through one’s mind as the screen shows only Acquanetta’s cornea. It is thought-provoking to stare at an eye for a while. You begin to realize an eye could be an eye for any number of animals.

Daniel Fish’s choice, as director, to present most of the performance on film, with select scenes acted out on stage, provided a brilliant design to meditate on how individuals tend to compartmentalize controversial aspects of themselves and project them onto others instead.

In the tradition of breaking “the fourth wall” from movies like Broadway Danny Rose to plays like Hamlet, Acquanetta is a creative and comical take on filming a scene in the film noir style. The title character is based on a real B-movie actress of the ’40s and specifically centers on the making of the cult horror classic, Captive Wild Woman.

However, this is not an opera in the traditional sense. Loud rock music smashes your senses as a huge eyeball is projected on the screen. The black-and-white movie rotates and spins and as the pieces of Acquanetta’s face become more whole, and she sings of being concealed, disguised, and blurred. Soon the make-up artist prepares her face, and the Director prepares her for her role by asking about her past life. All is sung in a straight tone, perhaps evoking human beings’ wild past.

The music is what I would call stream-of-consciousness and each character questions what kind of person or ape he or she is. There are hilarious nods to horror film characters: the evil doctor, the sexy nurse, and a bunch of apes with amazing singing talent hoping to be turned into a beautiful woman. I thought there was even a reference to The Wizard Of Oz, as the film turns from black-and-white to color, not upon a beautiful dream, but a bloody scene.

As mentioned in the program notes, this is a deconstructed look at what it means to be an actor or an observer. However, not mentioned is the surprising “plot” twist at the end when it is revealed that the “movie” you have been watching has been live action the entire time. The actual fourth wall of a room slides open to reveal actress and camera on a rotating platform. The strange thing is, this revelation changes your perspective of the piece in retrospect as they also literally shine a light on the audience with the turning platform.

Acquanetta, as entertaining and funny as it is, will have you thinking about it for days. Daniela Candillari conducts the Bang on a Can Opera Ensemble and the Choir of Trinity Wall Street in this production and brings fire, flexibility, and necessary endurance to Michael Gordon’s non-stop score. The requirements of the music also call upon the musicians and singers to display endurance while not sacrificing their range, technique, or voice all while producing the variety of sounds needed in such a show. Directions include: stylized scream, spooky, playful, and demanding + emphatic; and these are only the ones found in the libretto!

Mikalea Bennett is a powerful Acquanetta. Eliza Bagg, as the Ape, maintains a commanding vocal presence throughout the production. The compelling cast also includes Amelia Watkins as Brainy Woman, Timur as Doctor, and Matt Boehler as Director. The actors are adept at conveying the strangeness and horror, with humor, to be trapped in a room with a camera that eventually takes on a madness of its own to go on a mauling spree. Bravo to the ensembles for maintaining intensity throughout; it was truly impressive.

This post was written by Heather Waters and Susan LaFever.