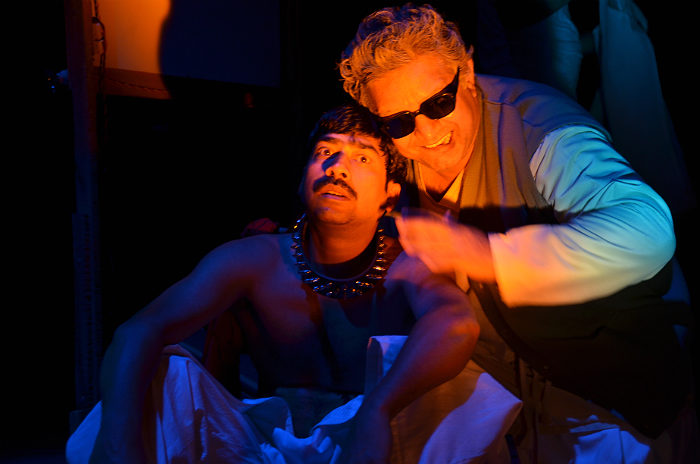 As a special treat for the attendees of The 23rd Cairo International Fes­tival for Contemporary and Experi­mental Theatre was a design worship by Abhishek Majumdar, an Indian scenographer, whose vision brought to mind colors, creativity, and daz­zling possibilities. The workshop trainees ranged from setting and costume students to professional scenographers or set design­ers, to assistant directors, to independent writers and directors.

Abhishek Majumdar is the artistic director of Bangalore based theatre company, Indian Ensemble. He is a playwright, scenographer and director and been part of the Lincoln Center Director’s Lab 2012 and the Young Vic Director’s network. His plays have been produced in India, Europe and USA. He is a visting associate professor of Playwriting at New York University in Abu Dhabi amongst other places. He works in multiple languages including Hindi, English, Bangla and Kannada.

Majumdar asked the trainees about their backgrounds and their expectations in order to choose the most suitable approach for the workshop. The workshop focused on three main pillars: his own approach in working, theatre and scenography in India, and different approaches to scenography around the world.

To make the workshop a real ex­perience for the participants, Majumdar began with a simple practical exercise in scenography. He asked the trainees to take a blank page of paper and some colors, to sit in a comfortable place or position, and to draw one of their most intense dreams. They should keep in mind, while drawing, three things: what happens in the dream, what they feel during the dream, and what the dream is about. Majumdar emphasized the necessity of honesty while drawing; there was no need to try to draw magnificently or beautifully: “Just have fun and be honest while drawing.”

After fifteen minutes, Majumdar asked the trainees to take extreme care of their draw­ings because they are their dreams. He com­mented that no two people have the same drawing or the same dream, even if they are members of the same family who share the same experiences. We remember things dif­ferently. Furthermore, the same memory changes with time. Our memory is like an artist who is ceaselessly painting.

Majumdar warned against “trying to internationalize theatre”—either making all persons and their outcomes look the same, or turning their aspirations into a mere out-of-context show. There is a big difference between being universal and being stan­dard. If one’s creation is about everything, it winds up being about nothing. One should not fall into the trap of exporting a production to a place where it means nothing by presenting everything at the same time. Majumdar emphasized that the most important thing is one’s subjective experience in life as an artist, one’s specific different dream.

Majumdar moved on to the next step of the exercise, asking the trainees to form pairs. Each pair had to exchange their dream draw­ings without commenting on their own drawings. Each had to look at their partner’s drawing and write down two or three words to describe it. Upon receiving their own drawing back, trainees were to contemplate their partner’s written words to see whether they triggered any other mental image, even if unrelated to their own feelings about the dream’s meaning. Majumdar asked the trainees to add extra details to the drawing and its meaning based on what their partner’s words suggested. He added that the dream now is not only the dreamer’s own but also the collaboration between the dreamer and their partner.

Majumdar explained that in his theatre company, they do not begin with a play; they begin instead with the dream exercise and how it affects each of them. Imagination comes first, not the play. They perform the dream exercise for 10 days before working on a play’s text. It helps them create a mutual diction and develop a com­mon vocabulary with their dreams. The dream cannot be reduced to logic, so everybody can talk about it and try to listen to its sym­bolic meaning, not its literal one. It suddenly brings rich results.

Majumdar then talked about theatre in India, its history, and its three types, playing a video on classical Indian theatre. He mentioned that, when designing a setting, he sometimes tries to find the equivalents of the codes found in the traditional form of Indian theatre, which is more like ritual festi­vals. He adds those equivalents to the setting, the actors, and so forth, so that the political meaning is not confusing to the audience.

Majumdar stressed that scenographers should think in terms of visual codes that they know well, exploring what their choices mean and why they chose them as they did.

Most trainees enjoyed the workshop and liked the new approach. “It’s very different from scenography workshops in Egypt,” said one. An­other said that the simple exercise that Majumdar led gave her much confidence and opened her to other ideas and additions while working on design for a play. Some trainees, on the other hand, said that they fear that the two-day workshop may be too short to yield con­siderable benefits.