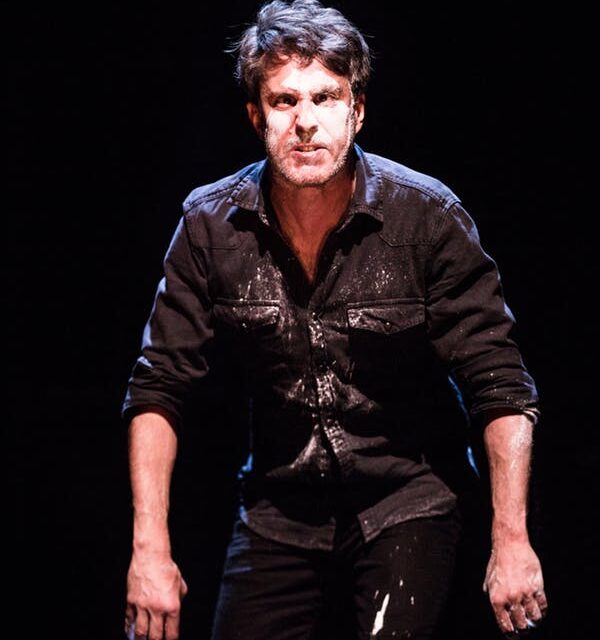 Musolino switches from narration to monologue and dialogue, voicing the many characters of "Animal Farm." Photo by James Hartley.

In a new one-man production, Renato Musolino brings George Orwell’s classic novella, Animal Farm, to life. A searing solo piece, the play showcases not only the talents of Musolino as a performer, but also its director, Geordie Brookman.

Written as an allegorical critique of the 1917 Russian Revolution and subsequent Stalinist era, Orwell’s novella details the rebellion of animals on Manor Farm against the cruel farmer, Mr. Jones. What follows is the establishment of a new order, and animal utopia in which all animals are equal. The animals collaboratively develop a new philosophy, “animalism” which consists are seven commandments aiming to instill a sense of pride and empowerment.

This initially egalitarian society slowly and hauntingly evolve, or rather devolves, into a system not much better than before the rebellion. A sense of unease and foreboding loomed over the production as we watched, helpless and passive, the insidious rise of the leader Napoleon and his class of pigs as rulers of the farm.

Musolino’s performance, the beating heart of this production, had the opening night audience transfixed. Switching from narration to monologue and dialogue, he portrayed the many and varied members of this new society with impressive vocal and physical transformations.

The pigs were characterized not only by snorts of laughter and squeals of delight in the face of other animal’s misery, but also by Musolino’s tensed and contorted hands forming trotters.

The bleating banality of the sheep, the slow but deliberate philosophizing of the committed workhorse, and the grumpy quips from the old donkey, along with the folk-tale lyricism of the narration, created a clear and consummate symphony of voices.

Musolino’s transitions between  characters were quick but seamless. Thanks to the actor’s piercing sincerity and skill as a storyteller, the pace and dramatic tension of the story was never lost- a risk when so much falls to just one performer.

A well-structured adaptation from Brookman, the outgoing Artistic Director, ensures that Orwell’s created world- one not so far from our own- and its injustices, betrayals, and exploitations, were orchestrated for maximum impact. The journey of Boxer the horse was particularly heartbreaking, crystallizing the cruelty, exploitation and ruthlessness of this new society.

One of the most effective ways Napoleon and the pigs disempower the other animals is by taking away their means of communication. Leading up to the revolution, the pigs teach themselves how to read and write while only offering a cursory education to the other animals.

The set, designed by Bianka Kennedy, consisted of an ominous black structure, not unlike an open coffin, tombstone or even a geometric Venus flytrap, which could close at any moment, swallowing us all. This limited space allowed for a concentrated focus on Musolino’s performance. A mixture of straight lines and softer lighting was used in the production. Photo by James Hartley.

Straight lines informed the approach of lighting designer, Alexander Ramsay on the structure itself, juxtasposed nicely with the softer lighting used to frame Musolino in quieter moments.

Andrew Howard’s soundscape, haunting but never overpowering, amplified the work’s dark intensity. the production, thanks no doubt to Brookman’s skillful direction, is technically explosive, intense and consistent with the work’s thematic concerns.

This is a production not to be seen, but experienced. It moved me to tears, stirring seething rage within in. Such was the power of Orwell’s, Brookman’s, and Musolino’s combined storytelling.

A cathartic production in the purest sense, Animal Farm evoked fear, pity, empathy, anger an recognition as the exploitation of power played out once more. The words “all animals are equal, but some animals are more equal than others” rang in our ears long after leaving the theatre.

Animal Farm is playing at the State Theatre Company of South Australia until March 30th.

This article was originally posted at theconversation.com on March 25th, 2019 and has been reposted with permission. To read the original article, click here.