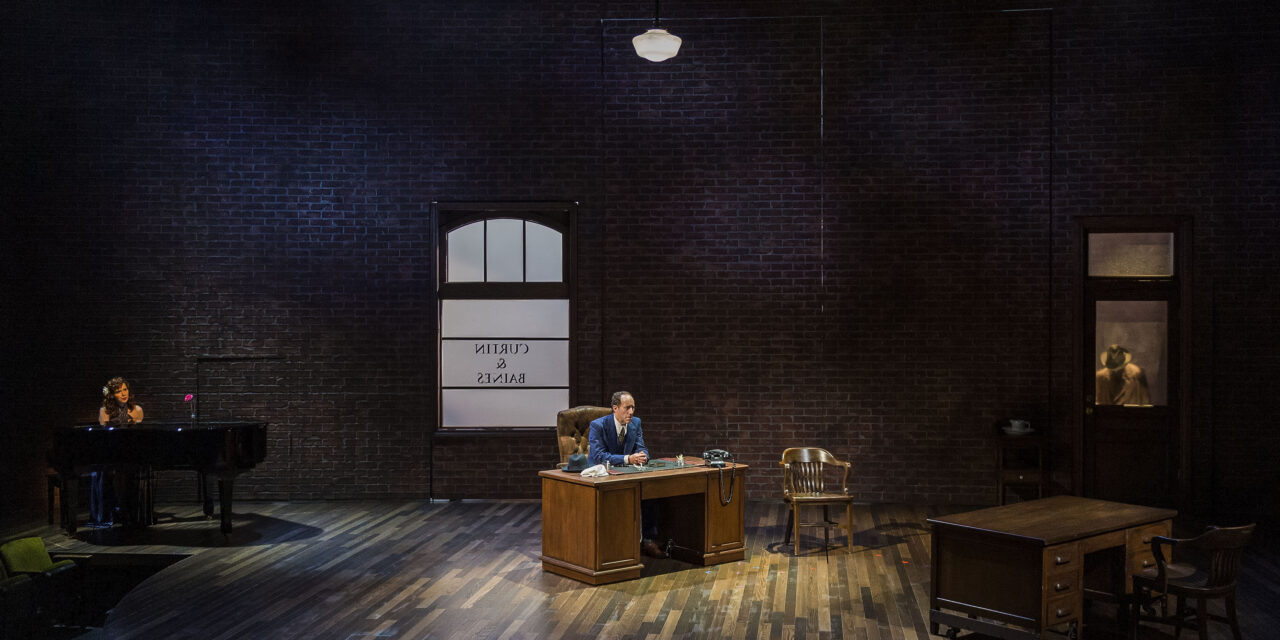 L-R: Nellie McKay and Joey Slotnick in the world premiere of "A Play Is a Poem". Written by Ethan Coen and directed by Neil Pepe. Photo by Craig Schwartz.

The Center Theatre Group presents a particularly cinematic treat with the World premiere of Ethan Coen’s A Play Is a Poem at Mark Taper Forum.  Directed by Neil Pepe and presented in association with Atlantic Theater Company, the piece is a collection of five one-acts set in five very different locations featuring characters some audience members might find familiar if they are a fan of Coen brothers films.  Scenic design by Riccardo Hernández features a large brick wall that can be transformed via doors, windows and via a bit of scenic magic into different locales and a lovely wood floor that feels overtly theatrical as if we were watching this play in an old Broadway house with its exposed back wall and little else to shape it.  It is a raw space that lends itself easily to the sudden shifts of mood each section, or ‘Act’ as musical performer Nellie McKay calls them while maintaining a visual thread that holds it all together. 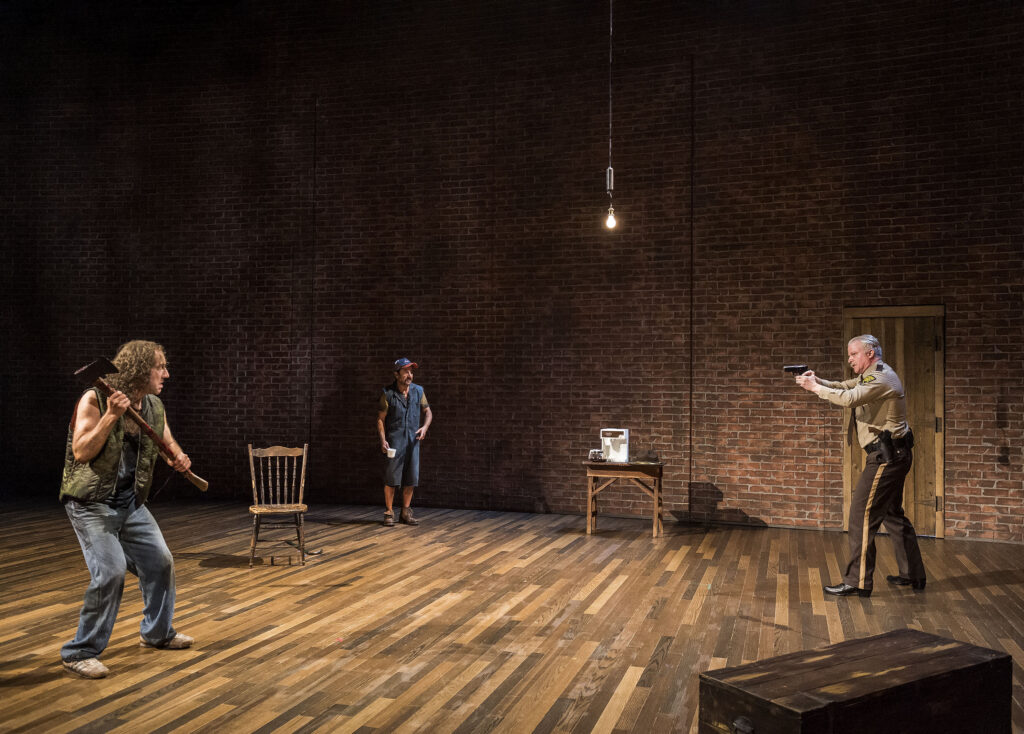 L-R: Joey Slotnick, Max Casella and CJ Wilson in A Play is a Poem. Photo by Craig Schwartz.

‘The Redeemers’ are first up in a scene that could have been an outtake from Fargo.  Wes (Joey Slotnick) arrives at the home of his brother Cal (Max Casella) who has recently chopped up their father and hid him under the floorboards.  Neither of them is upset about the loss – turns out the old man wasn’t very nice – but both are startled when their younger brother Gary Allen (CJ Wilson) arrives in need of coffee, wanting to share news of their father’s intention to apologize and ask forgiveness since he’s stopped drinking and ‘hittin people’. “Think upon this,,” Gary Allen suggests, “that Christ has forgiven him.”.  “He didn’t beat Christ.” -Cal responds.  That doesn’t deter Gary Allen (who wears a sheriff’s uniform, by the way – yes, he’s a cop) who remains certain all will be well among the four of them. He calls his brothers “puppets of the past”.  “‘Puppets of the past’ – what does he know!”, Cal exclaims, “Did his wife leave him?  Does he heave to masturbate to the Ecstasy Channel?”- just as Cal deduces there is plenty of room for his brother’s body under those floorboards next to their father’s.  Before they can execute their plan, a truth is revealed and many shots are fired. 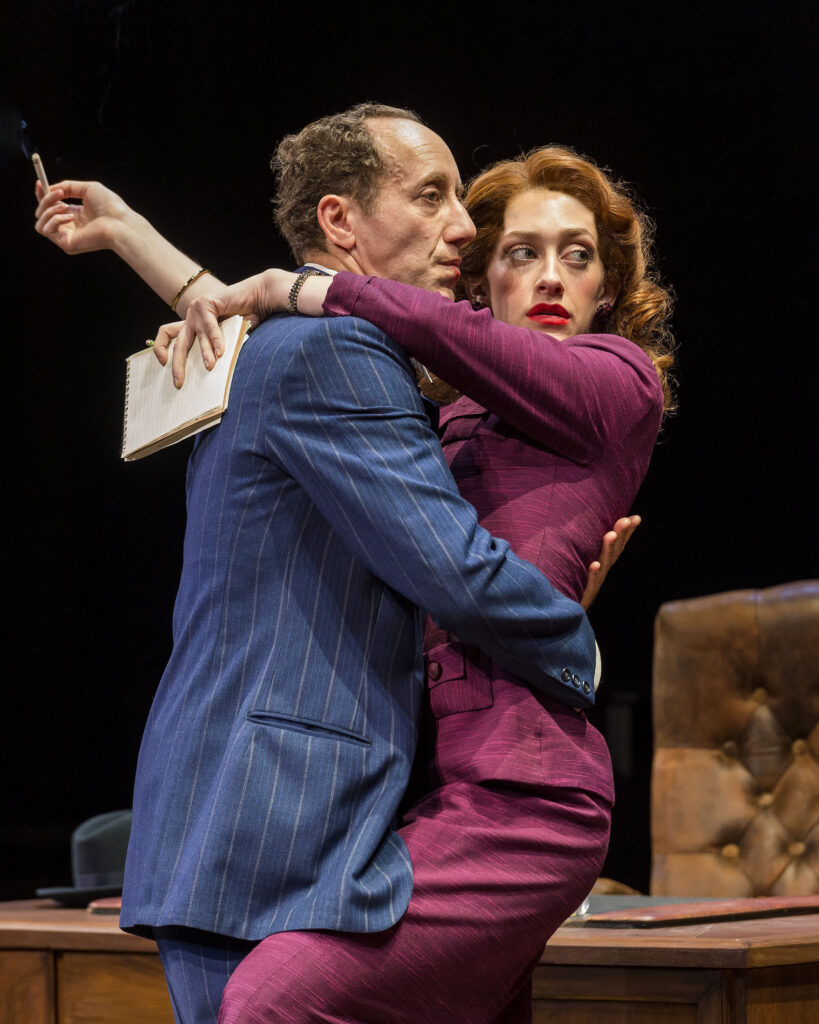 L-R: Joey Slotnick and Micaela Diamond A Play is a Poem. Photo by Craig Schwartz.

‘A Tough Case’ comes next – a couple of scenes lifted straight out of a 40’s Noir, with a humorous twist.  In one of two transformations that reveal his delightful range as an actor, Joey Slotnick is Ed Curtin, a private eye in search of a new partner thanks to the death of his last one.  Don Baines (CJ Wilson) is more than a little silly and woefully under-qualified but he lands the job and works out of the office while Curtin hears a case from client Arthur Threadgill (Saul Rubinek) and canoodles with receptionist/Girl Friday Lindy (Micaela Diamond).  The case brings Curtin to Johnny Branco’s joint (Peter Jacobsen) where he checks in with torch singer LuAnne (Nellie McKay) who has one of the best lines of the night when Curtin asks how she is and she replies “I’m a torch singer, honey, they pay me to complain.”.   Everything about this couple of scenes is delightful; from the clownish antics of Baines to the one-dimensional gangster that is Branco to the client in desperate need that is Threadgill.  It is enough to make us wonder what a full-length play in this genre might be like in Coen’s hands. 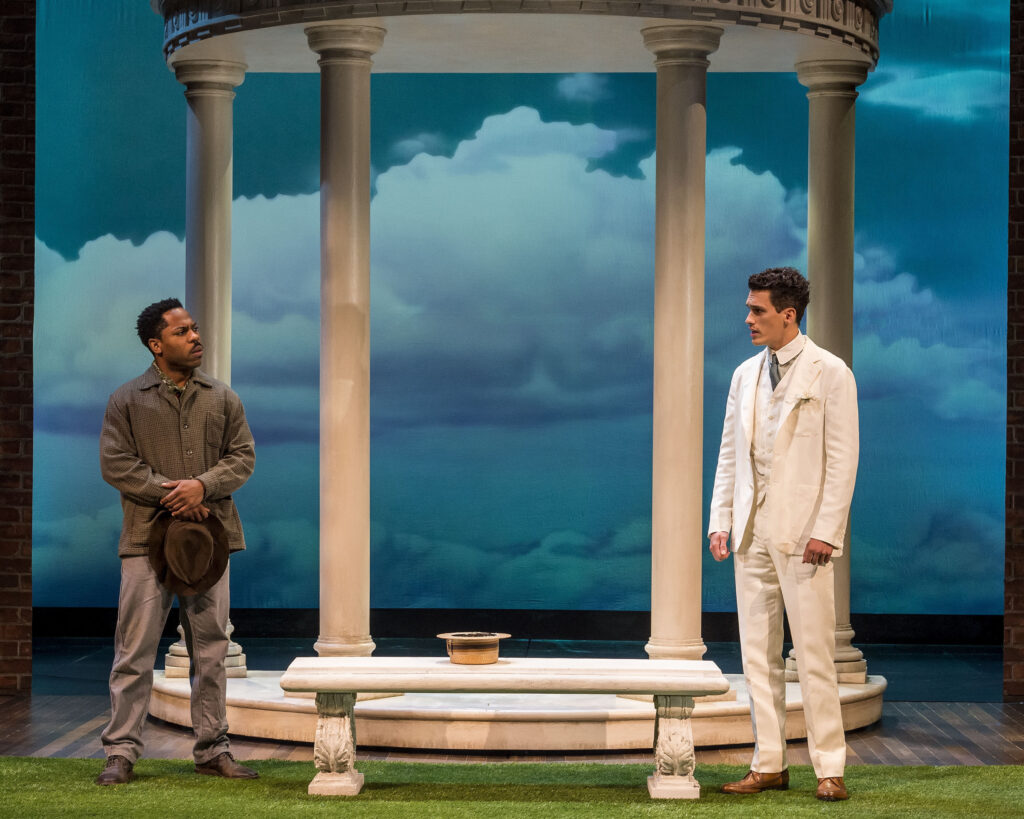 L-R: Ro Boddie and Sam Vartholomeos in A Play is a Poem. Photo by Craig Schwartz.

‘At the Gazebo’ is next, and I will credit my fellow theatre-goer with calling it the ‘Tennessee Williams’ section, even though I think it doesn’t quite hit the mark.  This sequence of scenes is the most ‘out there’ of the lot and in many ways that makes it the most challenging to follow.   The brick wall we have come to know and love makes way for a gazebo that is rolled out to center with a patch of ‘grass’ and a clear blue sky behind it. Carter (Sam Vartholomeos) is a young, Southern man who quotes Thomas Hardy and seems determined to find ‘romantic love’ in the guise of Dorothy (Micaela Diamond).  Having just seen Diamond as the overly willing love interest in the previous act it might be tempting at first to think she is slated to play the same part here but thankfully, she is afforded a moment of surprising strength that is better seen than reprised here.  Though her moment is strong, it is in this scene that I started to consciously take note of the number of women that appear in the play (counting Nellie McKay, who we will get to in a minute, women make up only 3 out of the 11 actors in the play and only one of those male actors is not white).  It should be noted that she does not fall head over heels in love with her suitor and even gets a solidly scathing line to match her independent exit but that feels like less than enough.  It would have been so lovely to see more women on that stage, and more actors of color – though it should be noted that Ro Boddie as Gadsden (a servant of some kind that feels undefined here) has the strongest moment of all when he listens to Carter wax poetic to a fault and answers with a grounded and rich “All right” or “I see”.  Overall, this is the hardest section to leap into and embrace, even though it comes with some smart insights and a bit of unexpected humor… it feels out of place, though the actors performing it are spot on. 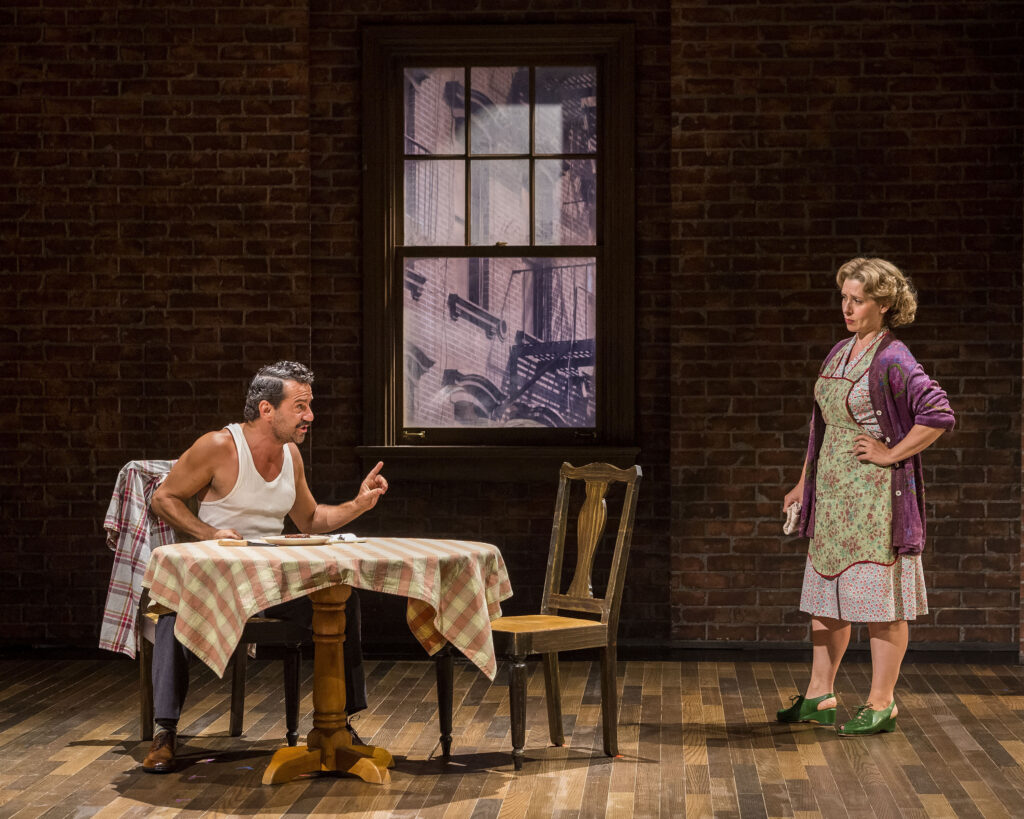 L-R: Max Casella and Miriam Silverman in A Play is a Poem. Photo by Craig Schwartz.

“The Urbanes’ is next, and here the play seems to get back on track with a ‘Honeymooners’-esque take on life in what we might assume is Brooklyn or Queens where the El shakes the timbers and therefore also the inhabitants of the apartment and the only affordable meat is liver that is cooked to the point of leather, much to the dismay of the Cabbie (Max Casella).  He may try to admonish his wife for her cooking but The Wife (Miriam Silverman, who is just fantastic in the role) is tougher than both the liver and her husband and doesn’t shatter that easily.  The Cabbie believes that Joe Falcone (Joey Slotnick, proving again how versatile he can be) will be his partner via buying into ownership of a cab but The Wife (lord, how wonderful it would be if she had a name) is smarter than her Cabbie husband and already senses something is amiss.  Ro Boddie makes another appearance here as Steve Tudik, a rival option for the Cabbie who in a role where Boddie shines again in a way that makes us wish he had so much more to do.  This section of the piece delivers a lot of classic (i.e. great) sit-com level entertainment, though it is tempting at this point to wonder how all of these disparate stories fit as a whole. 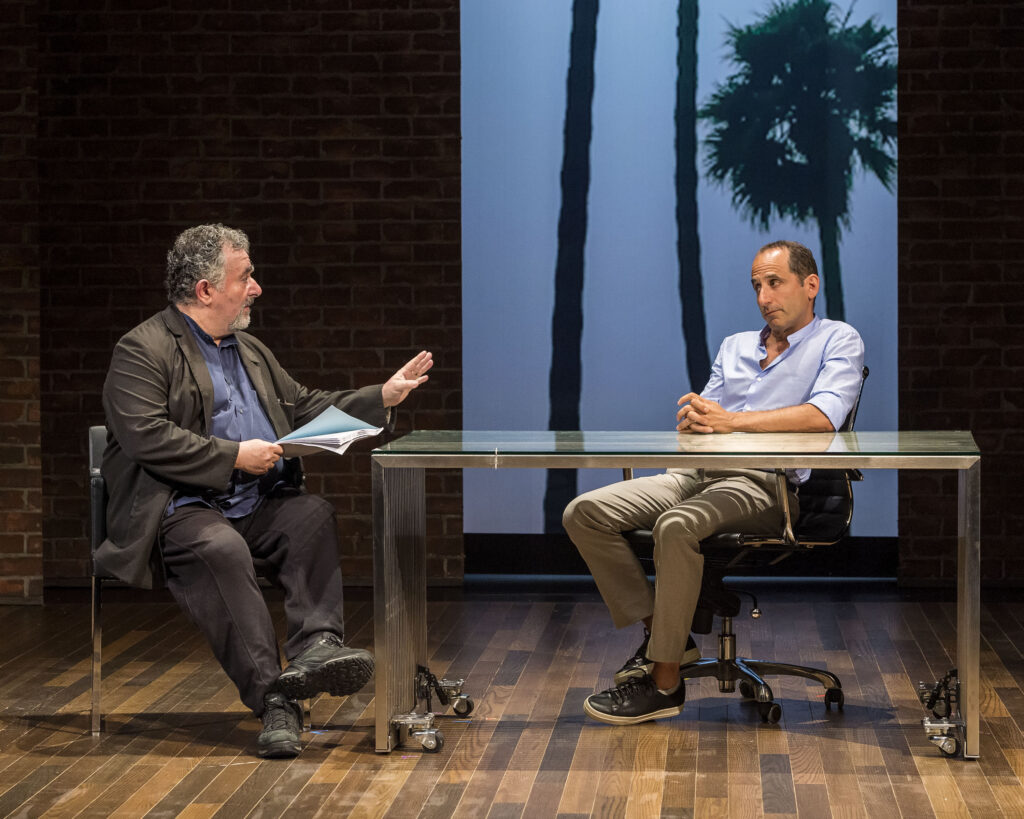 L-R: Saul Rubinek and Peter Jacobson in A Play is a Poem. Photo by Craig Schwartz.

That’s when we arrive at the final act named ‘Inside Talk’ – this is where we find the potential thread that could pull it all together.  Ethan Coen has written many plays yet still the majority of us will think of his films first.  Here it is tempting to deduce that we are witnessing a series of interactions that Mr. Coen might have experienced himself but I tend to see it as a take on the industry as a whole – and not a comfortable one.  Peter Jacobsen plays a Movie Executive who is essentially torn between two seemingly ridiculous premises.  Das Boot on a boat (coming to him via Lou Wald, played by Jason Kravits) vs. a concentration camp centered romantic comedy (coming to him via Jerry Sterling played by Saul Rubinek).  If you have a heart or a mind or a sense of history – well, really neither of these will work for you but in particular, the concept of a romantic comedy set in the Holocaust – that could set your teeth on edge.  Lou Wald has a writer in his corner that he is convinced can deliver (The Writer is played by Sam Vartholomeos) but in spite of that,  Sterling has information regarding Wald’s methods of dealing with writers that drives the Movie Executive to choose the concentration camp love story over the remake.  It should be noted, to no fault of his own, that one might look at Lou Wald and see Harvey Weinstein.  It should also be noted, that many films, books, plays, and other projects have profited from using the Holocaust as a backdrop for their stories.  Neither one is a comfortable truth, and the choice to end with this narrative opens up a lot of questions that are left unanswered. 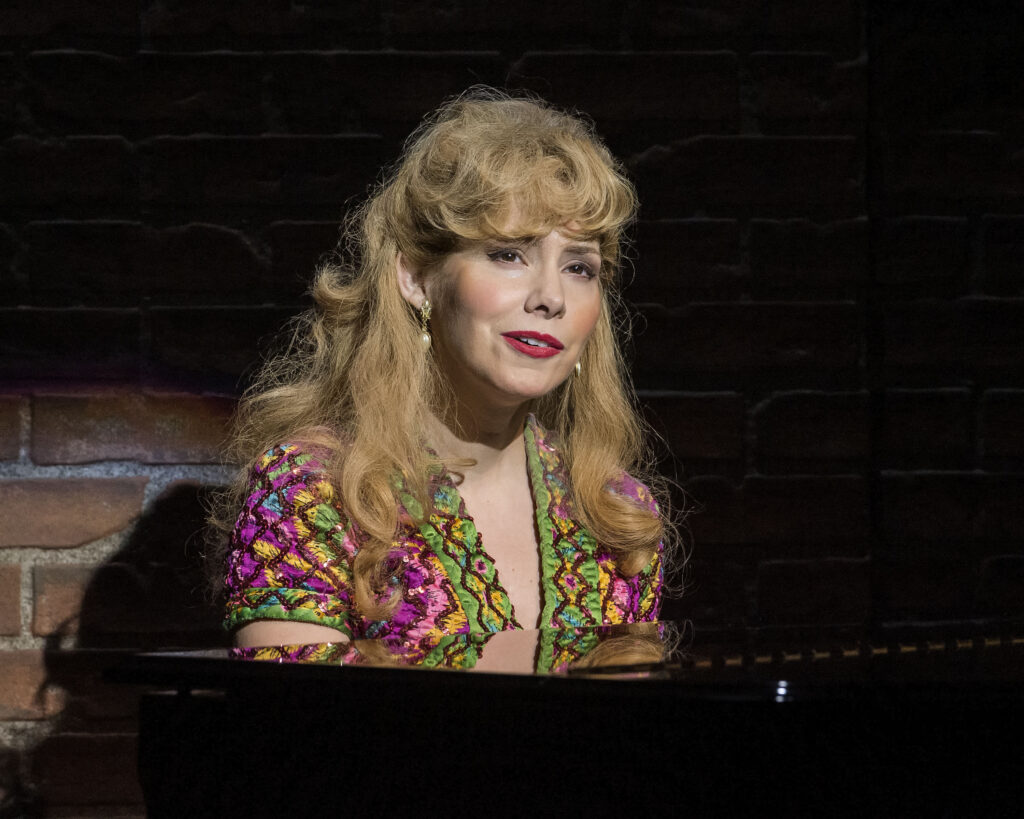 Nellie McKay in A Play is a Poem. Photo by Craig Schwartz.

But before we go, we have to talk about Nellie McKay.  Her singular scene-related name in the program does not do her enough credit for she acts as the thread that holds the narrative together, holding us in thrall to her skill as a vocalist, as a piano player, as a ukulele player – as everything.  Her voice is more than lovely, more than warm, more than anything you might hope for and it could be argued (no harm intended) that her songs are the reason why this piece works as a whole.  Her songs are drafts from the River Styx that help us forget where we came from and focus then on where we are.  She is a delight, and her ability as a musician is matched by every actor on the stage over the course of the night (again, would there have only been a few more women) but hers is the voice that makes Mr. Coen’s resonate all that much more.  Hers is the voice you will remember. 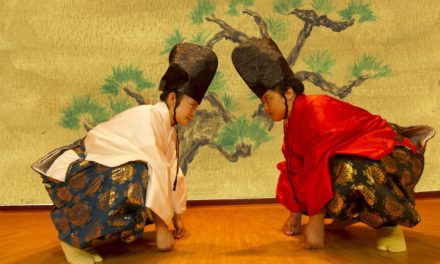