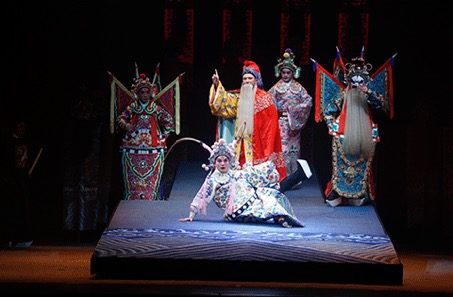 The 25th edition of the Varna Summer International Theatre Festival, Bulgaria’s biggest theatrical event, was held June 1-11, 2017 in Varna, a city scenically located on the Black Sea coast. Established in 1992 as part of the then common to East Europe’s striving for renewal and meeting with the western parts both of the Continent and the world following the political changes of 1989, the festival has developed powerfully and dynamically during its existence over the past quarter-century. Launched to present the best of Bulgarian theatre along with a few foreign productions, since 1997 it has evolved into a major international event that now stands alongside other high-profile European festivals.

There were four modules on the festival bill: Main Programme, Bulgarian Selection; Main Programme, International Selection; Showcase; and Parallel Programme. Maintaining an established tradition, this anniversary edition featured a rich tapestry of foreign and Bulgarian theatrical and dance productions; discussions; sessions with teams; a theoretical conference; and exhibitions, performances, street performances, screenings, and concerts. Forty-one events bearing the motto “Invented Worlds” and held not only in the halls but elsewhere around the city, as well in Bulgaria’s capital, with the World Theatre in Sofia platform launched in 2007, ushered in audiences and guests. The most convincing evidence of the success both of the anniversary edition and of the overall policy—up-to-date, well devised and consistent—of the festival over these two and a half decades was the full-to-bursting halls and the critical acclaim received from the many attending theatre experts, selectors, and curators of international events.

The Bulgarian selection included nine performances, selected from among this season’s best in this country: the compelling and ingenious No Man’s Land, by Stoyan Radev, based on the 2001 movie of the same name by Serbian writer/director Danis Tanović; What Is a Name?, an inventively staged comedy by Matthieu Delaporte and Alexandre de La Patellière, directed by Zdravko Mitkov, Theatre of Satire, Sofia (Icarus 2017 Award for Best Performance); the incisive Anna Karenina, after Leo Tolstoy, dramatised and directed by Nikolay Polyakov, Sofia Theatre (Icarus 2017 Award for Best Director); the stylish Plamen Markov’s renditions of Shakespeare in Love, after the film script by Marc Norman and Tom Stoppard (Drama Theatre, Varna); Stayko Murdjev’s staging of Equus, by Peter Shaffer (Youth Theatre); and The Bright Future of the Flea Market, based on the 2015 Nobel Prize winner for literature Svetlana Alexievich’s novel Second-Hand Time, dramatised and directed by Ivan Dobchev, Sfumato Theatre Laboratory.

The international selection’s focus at the anniversary edition was on Asia and, in particular, on the intensive dialogue in that continent’s theatre between the eastern and the western traditions, between heritage and novel ideas, between history and the present day. The international programme included a traditional Peking opera, A Terrified Soul (Macbeth), based on Shakespeare’s tragedy, by the Anhui Provincial Peking Opera and Hui Opera Institute, China; a documentary dance performance, SoftMachine: Rianto & Surjit, by the Berlin-based Choy Ka Fai, a choreographer from Singapore; and Skins, a dance miniature by Lee Jung In (South Korea/Austria). Apart from performers and companies from Asia on its international bill, this year the festival maintained its tradition to present some of the best European and international productions: Diary of a Madman, by the Hungarian director Viktor Bodó, winner of the New Theatrical Realities 2016 Europe Theatre Prize; Autarcie (. . . . ) A search for self-sufficiency, by the French choreographer Anne Nguyen; Desplante, a contemporary flamenco performance by the Spanish dancer Eduardo Guerrero; Live Cinema, a theatre/film concert by the documentarian Sam Green and the animator Brent Green (US), and others.

SoftMachine: Rianto & Surjit (Germany/Singapore) and Diary of a Madman (Hungary) stood out from this rich and multifarious international program.

The title of the documentary dance performance SoftMachine: Rianto & Surjit—by Choy Ka Fai, a choreographer from Singapore, a 2011 graduate of the Royal College of Art, London, with an MA in Design Interaction and since 2014 working mainly in Germany—was borrowed from the popular novel by William Burroughs, in which the writer refers to the human body as a ‘soft machine’ exploring the mechanisms of its control. This performance is part of Fai’s project that explores how the work of contemporary Asian dancers and choreographers mixes and catalyzes eastern traditions with the artistic techniques and strategies of European contemporary dance. Between 2012 and 2015 Fai visited five Asian countries to interview local dancers and record their performances, in which they, starting from traditional dance techniques, inventively transform them into the aesthetics of contemporary dance. Varna Festival audiences had a chance to get to know the individual stories and experiences of two of these artistes, Rianto (Indonesia/Japan) and Surjit (India), spectacularly performing a traditional and contemporary dance.

On 4 June, three striking performances succeeded one another during a stunning night to demonstrate brilliant acting: Diary of a Madman, a one-man show by Tamás Keresztes, directed by Viktor Bodó; Songs from My Shows, a concert performance by the famous Bulgarian performer Ivo Dimchev; and the abovementioned SoftMachine: Rianto & Surjit. The Hungarian actor Tamás Keresztes’ performance made a deep impression. Against such a powerful backdrop, it stood out as evincing fine artistry and easiness, based on contemporary reflection, great erudition, and inventiveness.

In the ingenious reading of Gogol’s famous short fiction by Viktor Bodó and Tamás Keresztes, the unusual world of a civil servant, Poprishchin, distorted and transformed through his subjective misperception as he gradually loses his mind, is set directly on the stage. In the total darkness of the stage/universe, a lonely pendant lamp sheds light on a strangely deformed cube with an irregularly shaped and misproportioned door on its front side, before which a slim human figure writhes and shudders in an unnatural posture. The silent, expressionistic morbidness of this scene is suddenly broken, or rather deepened, by the harsh, loud whisper of the writhing human silhouette: “Fantastic! Fantastic!” The cube makes a turn on its axis, also asymmetrically fixed to the floor, to show Poprishchin’s abode: a strange room cast into the pitch black of the surrounding and practically missing outer world opening up to the audience and the right. The few things it contains are also distorted in an expressionistic manner: a narrow desk on long, thin legs put into an unnatural perspective; a correspondingly small stove; a chair; a window; and the aforementioned door. The room undergoes yet another metamorphosis in the course of the performance: in the end, when Poprishchin is taken to a mental home, it revolves to stand on one of its sides, and its wooden floor becomes bars, with the body of Poprishchin’s troubled soul writhing behind them. He and his world are one: he is always in his “room,” unable to leave it, as it is built in his twisted mind, reflecting its workings. The deformed room and its metamorphoses as an image emblematic of Poprishchin’s world are a starting point and a key achievement of Keresztes’ one-man show. Tellingly, the actor himself is also the set designer.

Another emphasis in Keresztes’ spatial solution is a digital device mounted in the messy room and used by the character to record, merge and mix sounds like DJs do: hiccups, screams, wheezes, unusual falsettos and the noises he produces himself. Thus, along with the mobile and multifunctional character, both a human being and a house, the actor’s voice and sound become a major element of the performance. In recording the sounds he (believes that he) hears and rearranging these in tunes, meanings and rhythms, which he himself composes using contemporary media, Keresztes’ Poprishchin not only renders—directly and effectively—the ‘stories’ born and unfolding in the character’s drifting mind but also makes a surprisingly relevant suggestion: man nowadays using digital technologies to invent and create a world to live in may well face loneliness and lose touch with reality, voluntarily heading for a new ‘madness.’

Usually, (one-man) shows of Gogol’s Diary of a Madman are performed by great and brilliant actors. Keresztes’ accomplished performance not only maintains and ingeniously continues this tradition but also adds to it keen contemporary sensibility and relevance. This is undoubtedly the most contemporary rendition of Gogol’s novelette I’ve watched on stage.

The 25th-anniversary edition of the Varna Summer International Theatre Festival has proved once again the festival’s role as a significant and in-demand venue for meetings and discussions of various theatre voices woven into the current tapestry of Bulgarian, European and world theatres alike.