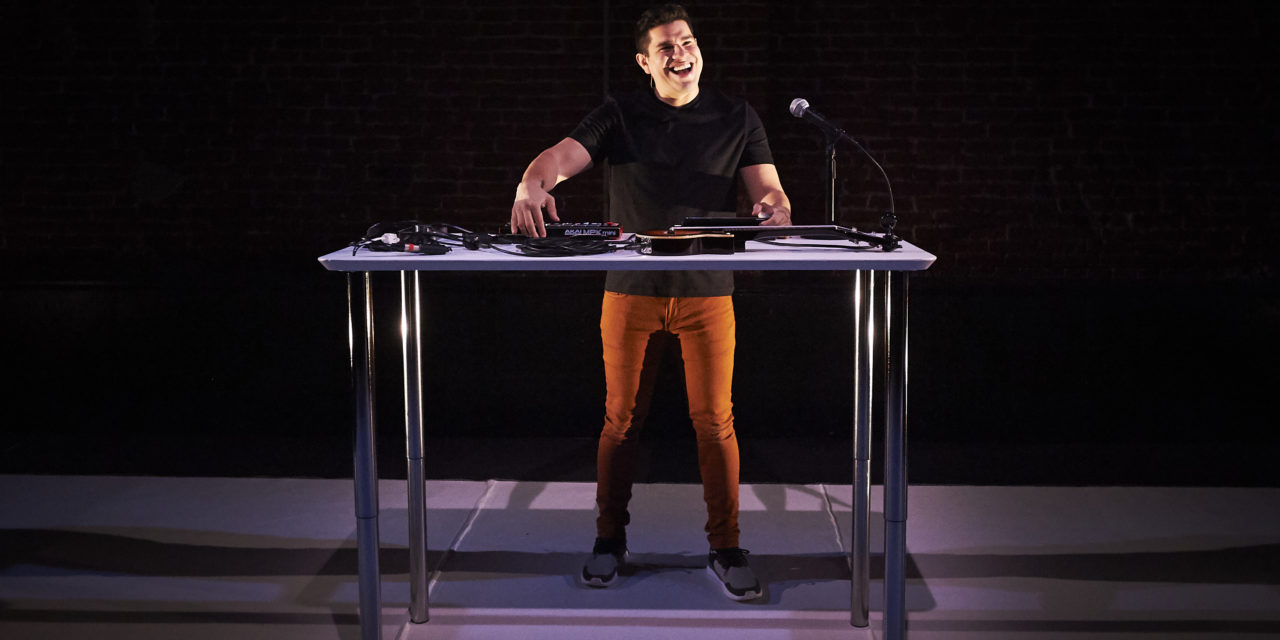 Brian Quijada in "Where did we sit on the bus?" Photo by Kristi Jan Hoover, courtesy City Theatre.

Playwright/poet/performer Brian Quijada has hope for the future.

That’s not an easy orientation to maintain these days, particularly for someone who belongs – like Quijada himself – to the unjustly maligned community of people who are, or once were, undocumented migrants from Latin America. Yet paradoxically, it’s his own experience growing up the son of illegal immigrants from El Salvador that gives him hope for his yet-to-be-conceived mixed-race child.

The story Quijada tells in Where did we sit on the bus? is framed as the personal history he might tell that child one day, and if he ever does, he will certainly rank as one of the coolest dads in the kindergarten carpool. Quijada is also a master “looper,” and he starts off by laying down some vocal beats, layering on ukelele licks and vocal harmony, and then looping the result, controlling the volume and mix with his cell phone as he steps away from his tech-laden table. This magically self-generated music underscores a performance in which he weaves energetic hip-hop poetry into the narrative of his life from birth (literally, he starts his story in the womb!) to the present moment.

Quijada is a charismatic performer with a winning smile and a sly sense of humor: in the course of telling his story he also impersonates the major figures in his life, giving them voices that gently poke fun at stereotypes, Latinx and other. For example, his third grade teacher, who fails to come up with an answer to his innocent query about where brown people like him sat on segregated buses in the Jim Crow South, is a dead ringer for Roz from Monsters, Inc.; his dad, who IRL does not sound like Antonio Banderas, sounds like…Antonio Banderas (or maybe Ricardo Montalbán). Director Chay Yew makes dynamic use of the mostly empty stage space, with Diane D. Fairchild’s lighting design helping to integrate the diverse modes of storytelling by seamlessly shifting the visual world as Quijada’s text slides from hiphop lyricism to prose to song and dance.

Quijada’s narrative is one that not only traces his evolving sense of what it means to be the son of Latinx immigrants, but also documents his evolution as a politically aware hiphop artist.  He traces his love of dancing and his early obsession with Michael Jackson (comically illustrated with a couple of extremely nimble dance sequences), his awakening to the erasure of Latinx people from the history of the civil rights movement, his teenaged anxiety and confusion about assimilating into a mostly white and Jewish high school, the challenges he faced getting his parents to accept his chosen career in the arts, and his discovery of his love for spoken word performance. Along the way, he points out the microaggressions and stereotyping that tripped him up at regular intervals: strangers who marveled at how well he spoke English, for example, or teachers who mangled his last name. Yet his story is primarily an uplifting one, a story that expresses pride in his family and their hard-won success, and while Quijada offers apposite criticism of the xenophobia of the present political powers-that-be, he also celebrates the spirit of welcome and inclusivity – emblematized by the “give me your tired, your poor” message inscribed on the Statue of Liberty – that he sees as America’s potential and promise for the generation to which his child will belong.