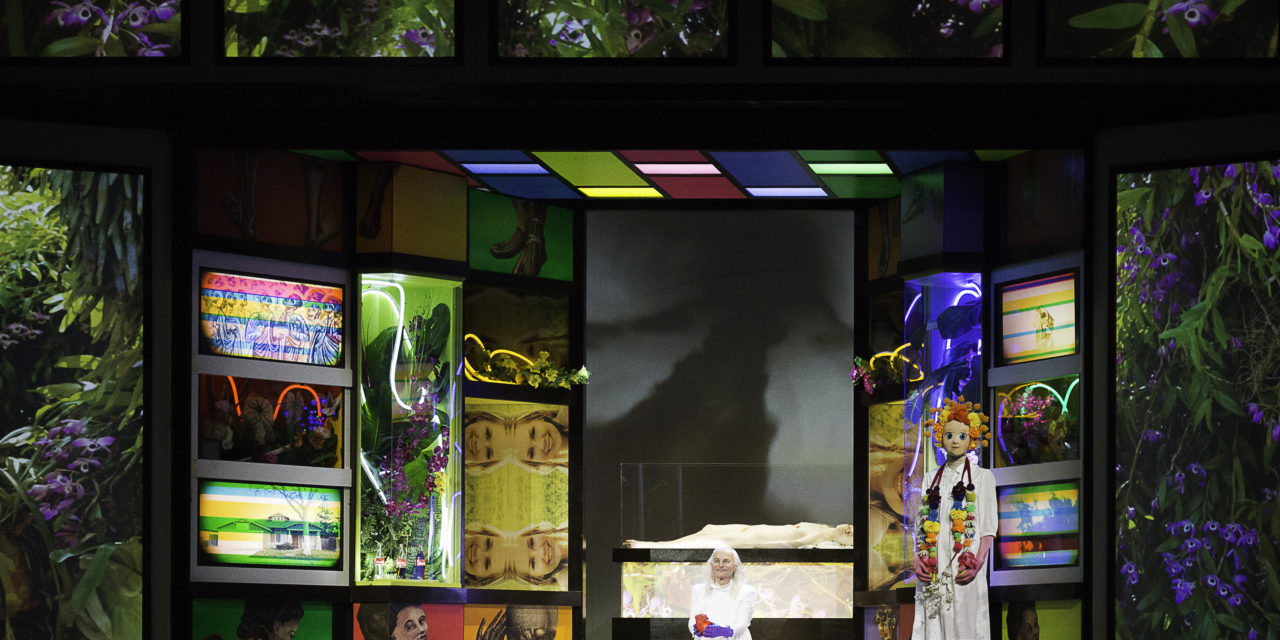 A Production of the Munich Kammerspiele winner of XIV Europe Prize Theatrical Realities, 2017

Inspired by the 1993 novel The Virgin Suicides by Jeffrey Eugenides and the 1999 film adaptation by Sofia Coppola, Susanne Kennedy’s production looks at the difficult issue of teenage suicide that has become a curse of today’s society. An exploration of the impossible journey through a near-death experience, the production is structured after the Tibetan Book Of The Dead. It follows the death voyage of the now deceased 13-year-old girl, Cecilia, from the highly religious Lisbon family in the US.

To those familiar with the novel, Kennedy’s adaptation might appear overtly simplified. To those who have never read it, the performance will seem intriguing, bizarre, and even hypnotizing.

On stage there is a shrine: a colorful structure presents a crossover between a Catholic church, a Tibetan temple, and a set of gambling machines you can find in small American cities. Its walls are covered by TV monitors and large screens which show images of the young girls, supposedly the Lisbon sisters. At the altar, there is a transparent coffin displaying a rubber-like body of a girl who just committed a suicide. Next to it, there are three life-size doll figures dressed in white garments with flowers, suggestive of the Catholic priests’ attire. Everything we see and hear is mediated: the female figures are played by men. Their voices are pre-recorded and digitally modified. Their faces are covered by synthetic masks inspired by manga-drawings. They move in a highly stylized manner that reminds one both of Noh movements and Japanese cartoons. These seem to represent both Cecilia’s sisters, and servants of the temple, whose function is to worship the dead and to watch the living.

The performance begins with the monologue of a dead girl, whose avatar is projected on the right-side panel of the shrine. This projected figure has no age or gender, a visual representation of the soul of a dead being. With this monologue, the production invites the audience to open its state of mind and come on this journey into the abyss of the unknown.

In the novel, the remaining fours sisters commit a collective suicide the year after Cecilia has attempted hers. On stage, we witness a ritual of preparation for dying: the sisters/dolls/temple servants are all getting ready for their own journey into the abyss.

Suddenly, a new figure joins the team. It is another doll, a male. He also wears a white dress but his face is not covered with a mask. He is an old man and his presence suggests numerous connotations: he can be the father figure helplessly watching his girls taking their lives; he can be a priest in this temple of suicide, and he can be responsible for Cecile’s rape and eventual death, as suggested by the text. One way or another, the significance of this figure is difficult to overestimate as the play ends with the old man alone on stage, holding the heart of a girl pulsating in his hand.

The religious connotations don’t end here. The image of the Virgin Mary is the driving symbol of this production: it is repeatedly projected over the altar as well as evoked in relation to the young girls. When one of the dolls dies center stage, the other one bleeds from her nipples: the Christian imagery is difficult to escape.

An exercise in collective meditation, Kennedy’s play aims to hypnotize the audience into stillness. It wishes to provide us with a special time to reflect on the fundamental issues of love, faith, hope, and death. The question becomes, however, is it truly possible to feel pain and ecstasy in the culture of total mediation? The Virgin Suicides wishes to be as ambitious and ambiguous as the work of Sarah Kane is. Perhaps, it is not as intense as the writing of the now deceased playwright was; but it is as urgent. Kennedy is deeply concerned with the fundamentals of human destiny, asking questions of the value of life and our spiritual well-being in the age of mediatization and infantilization. Similarly to Kane, she is trying to draw our attention to the failures of the consumerist culture, specifically when we are deprived of non-mediated experiences, so even death becomes the subject of a video game or a you-tube posting. Highly reflective, this show demands an educated audience, able to read the director’s religious and literal connotations. At the same time, it appeals to spectators familiar with popular culture, able to recognize the references and the director’s irony in relation to them.

A production of the Munich Kammerspiele. based on the novel by Jeffrey Eugenides The Virgin Suicides, directed by Susanne Kennedy, winner of XIV Europe Prize Theatrical Realities, 2017

In German and English 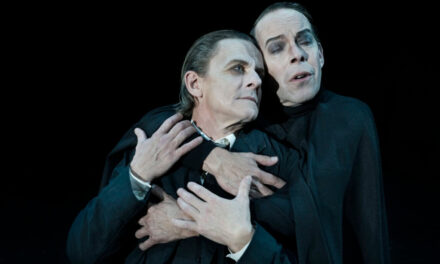