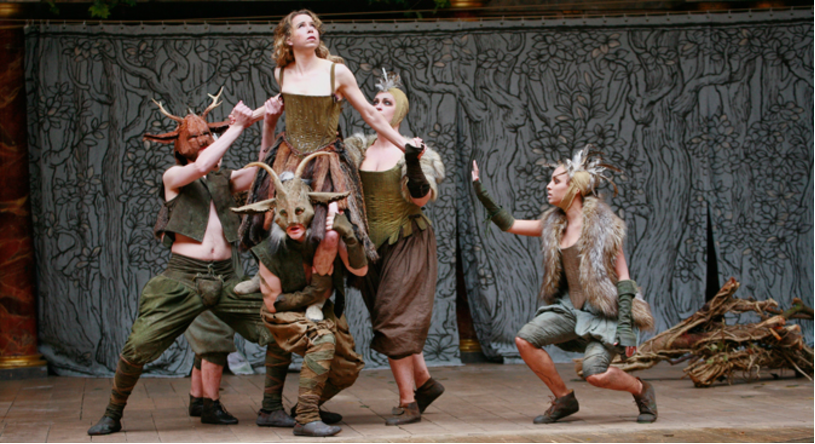 Visit closes with Moscow performances of A Midsummer Night’s Dream.

London’s Globe Theatre arrived in Russia in the Urals city of Yekaterinburg, after a long tour of China. Part of a regional programme of the current UK/Russia Year of Culture supported by the Regional Public Foundation of the Chekhov International Theatre Festival, the tour brought Shakespeare’s genius direct to audiences throughout Russia.

Performances by the troupe in St. Petersburg and Pskov were followed by five daily of shows in Moscow’s Mossovet Theatre, with two performances each day on the weekend.

Sell-out performances thrilled audiences made up of theatre professionals and amateurs, students, critics, actors and those who simply love the English language in all its Shakespearian splendor.

The Globe’s Moscow performance of Dominic Dromgoole’s A Midsummer Night’s Dream confirmed that traditional theatre could be more than simply a stultifying museum piece, but a living link between generations and epochs.

The language was no barrier, despite the fact that the play was performed in English and the audience was largely made up of Russian speakers.

When on the wooden stage of the Mossovet State Academic Theatre, the impish little pageboy Puck (RADA-trained Molly Logan) screams “Wow” in English, or amateur actors, telling the story of Pyramus and Thisbe, so similar to Chekhov’s The Cherry Orchard, or greet each other in Russian, there is no interruption to the audience’s appreciation of a long, full three hours, immersion in the British Golden Age of theatre.

It seems that Moscow audiences (and beforehand, the no less refined, but more restrained Petersburg audiences) primarily rejoiced in the balletic precision of the staging, while discovering the unique acoustic, figurative and verbal colouring of Elizabethan theatre, from which the dust of ages was vigorously swept away forcing all in the auditorium to experience a live onslaught of humor, confusion, fear, melancholy and love, that so elegantly and powerfully stream from the pen of the genius philosopher Shakespeare in one of his greatest comedies.

In the midst of a controversy about the role of contemporary stage plays, which has divided Moscow theatres into conservatives and seekers of new forms, A Midsummer Night’s Dream demonstrated the charm of theatre, where the artistry of actors is dominant, where there is no need for stage effects.

The actor’s face and gestures are flooded by bright, even light; as in the hall, so on the stage. The actor has too much respect for the power of imagination that reigns in Shakespeare’s theatre, to strain his musculature into false grimaces and poses.

Quite evidently Russian theatergoers appreciated this approach. Tatian Belok, a Moscow spectator was so entranced by The Globe’s performances, that she watched the play three times, regretting that a fourth visit was not possible. “It is like Petin’s choreography – the longer you watch or listen, the more you enjoy it,” she told RBTH.

Audiences for the Russian tour were untroubled by the political circumstances in which the UK/Russian Year of Culture has taken place. In July, the British side officially withdrew participation and support for the year of cultural activities.

The move, part of a wide set of sanctions imposed by European and western countries connected with the crisis in Ukraine, has lowered the status of the entire cultural program, leading to the postponement and, at times, cancellation of planned activities.

However, the executive producer of the show, Tom Bard confirmed to RBTH that it never even crossed his mind to cancel the tour in Russia: “Culture helps to rebuild those bridges between peoples that are destroyed by politics and war. The current tour is a logical continuation of our relations with Russian theatres, developed over the last few years,” he said.

Actress Janie Dee, who plays Titania, in comments connected with the difficult political situation, remarked: “I am surrounded by very smart people who understand what is happening, and that everything is not so simple. To point a finger and identify a guilty party is impossible.”

The Globe tour brings to an end the major English Program of the Chekhov Festival, which was launched in the spring of this year.