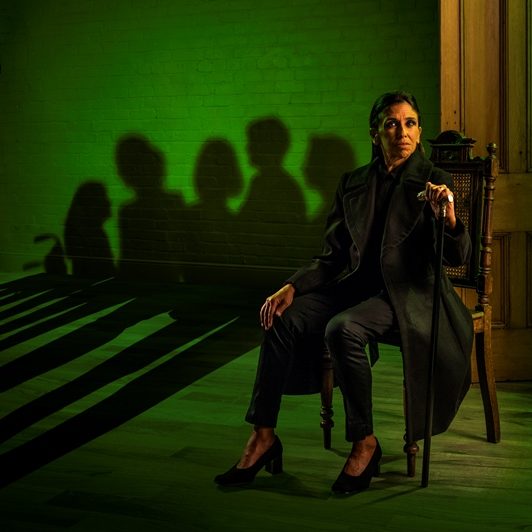 As the London Eye fireworks die down and 2016 segues bleary-eyed in to 2017, one of the most successful plays in translation of recent history is enjoying a major revival:  Yasmina Reza’s Art.  Translated by Christopher Hampton, this comic three-hander on the trials of friendship opened in London’s West End in 1996, ran for several years, transferred to Broadway, and won both an Olivier and a Tony.  Until February 2017, it runs at the Old Vic theatre and has now been described by one critic as ‘an old master’.  This new production follows hot on the heels of a series of successful translations from French by Hampton, with Florian Zeller’s The Mother, The Father and The Truth enjoying great success in recent years, and with Chris Campbell’s translation of Quebecois playwright Catherine-Anne Toupin’s Right Now for the Bush, the Traverse and Theatre Royal Bath adding to this reawakening in the UK of interest in Francophone playwrights.

But 2016 was also the year in which a majority of UK voters elected to leave the European Union, leaving many of us with an interest in international and translated work uneasy:  how would European theatre – and international or translated theatre in general – fare in the UK in the year when Article 50 is set to be triggered?  Would the will of the 52 per cent transfer into a reduction in translated theatre?

In a landscape where plays originally written in a language other than English are already fairly thin on the ground, it is hard to see a trend so early on, but a survey of the 2017 programmes of some of the UK’s theatres does suggest there is no need to panic just yet.  Indeed, it may be the case that international theatre is given more of a role as companies push back against a perceived tide of isolationism.

At a time of increasing isolationism, I am especially pleased that in 2017 we have new German and American plays and a fresh version of a major French classic, addressing the big issues of the day: feminism, race and the ever-present danger of the far right.

The German play in question is Roland Schimmelpfennig’s Winter Solstice, translated by David Tushingham and presented by the Actors Touring Company.  This is one of at least five German plays to be staged in 2017:  North East London’s Park Theatre revives Marius von Mayenburg’s The Ugly One, translated Maja Zade; the same author-translator pairing appears at Theatre Royal Bath, with Plastic; Jack Thorne pens a new version of Georg Büchner’s Woyzek at the Old Vic, and the Donmar Warehouse revives Bertolt Brecht’s The Resistible Rise of Arturo Ui in a version by Bruce Norris.

Ui forms part of the Donmar’s ‘Power Season,’ described by artistic director Josie Rourke as a programme of ‘plays that concern themselves with truth and accountability; democracy and demagoguery; passion, despair and the rebirth of hope’.  “In creating the Power Season,’ said Rourke, ‘we’re trusting that theatre will deploy its power to speak with swift and urgent clarity into the present.”

Meanwhile, in East London, the Arcola Theatre also looks to 2017 with a response to the politics of the day, armed with a cache of European classics.  Its ‘Revolution’ season looks back to the Russian Revolution in its anniversary, but also ‘investigates a world on the brink of profound change’.  Along with new work by local playwright Oladipo Agboluaje, the season features Maxim Gorky’s The Lower Depths, translated by Jeremy Brooks and Kitty Hunter-Blair, and Anton Chekhov’s perennial Cherry Orchard in a version by Trevor Griffiths.  (Props to the Arcola, incidentally, for its billing of translator Helen Rappaport).

Chekhov is also on the bill at the Young Vic, with The Bear and The Proposal­ revived in Michael Frayn’s translations.

The Young Vic stunned with a reimagining of Federico García Lorca’s Yerma in 2016, and Lorca is set to return to the UK in 2017 as Manchester’s Royal Exchange theatre revives The House of Bernarda Alba in Jo Clifford’s ‘spare and full-bodied translation’.  Also in Manchester, HOME’s ‘Viva!’ festival returns in the spring, promising more Spanish and Latin American theatre alongside a curated selection of films (details to be announced).  Back in London, the Latin American theme continues with a world premiere of Chilean playwright Guillermo Calderón’s B at the Royal Court.

Back to where we began – with France – and Bristol and York bring Francophone work both new and classic.  At Bristol’s Tobacco Factory, Dominic Power and Andrew Hilton reversion Molière’s Tartuffe.  In York, the Theatre Royal (in co-production with the Arcola and Changing Face) brings Alexandra Badea’s award-winning The Pulverised to the UK for the first time, in a translation by Lucy Phelps.

With 2017 only just beginning, and with many companies yet to announce their programming for the year in full, it is too early to know how the British theatre landscape may shift in the wake of so much political tumult both at home and abroad.  But as Art garners healthy reviews and houses, as artistic directors speak out against isolationism, and as full five German plays find themselves scheduled for the first half of the year alone, it looks as though the interest in playwrights from overseas – and in their translators – hasn’t been extinguished just yet.