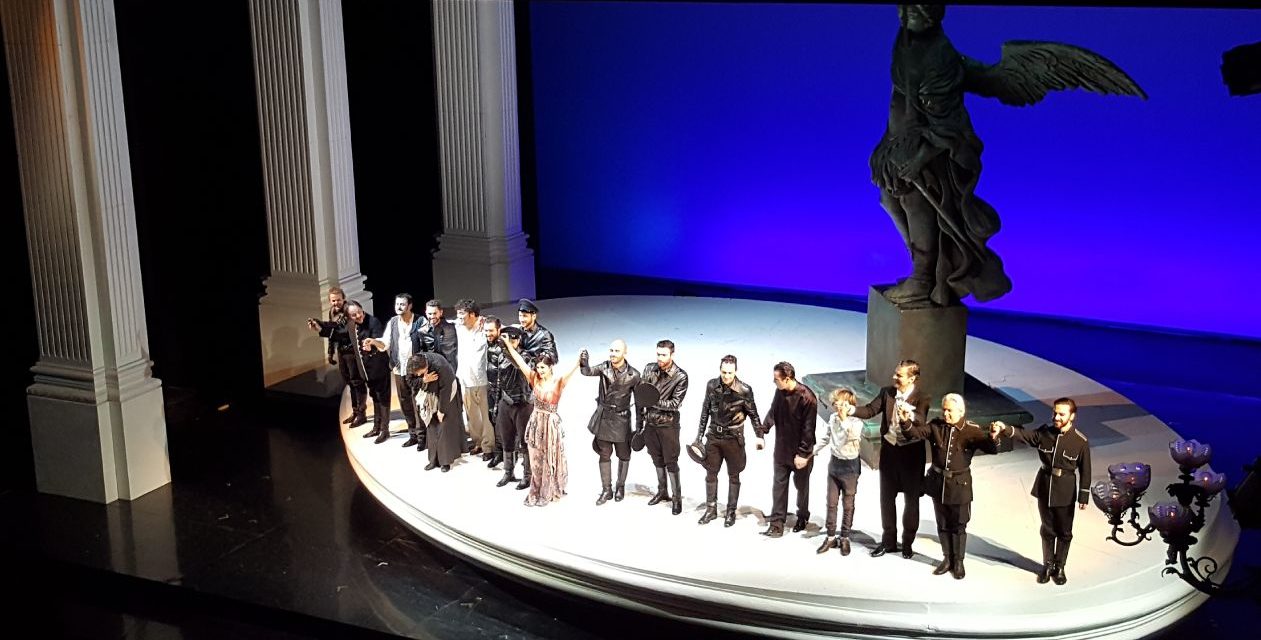 If you perform Puccini, and Tosca even more, you’re sure of success. The Theatre Comunale di Bologna makes this choice to close the 2017 season, and they guarantee a sold out show and applause by choosing the masterpiece of the genius of Lucca.

Originally, it should have been Aziz Shokhakimov as the conductor, but later they decided to call Valerio Galli. He’s an expert on Puccini. Yes, we know, there was good singers also, but the quality of the orchestra’s sound, the timbre research, and the beautiful theatre’s choir deserve a standing ovation just for him. Furthermore, the orchestra and the choir were capable of doing amazing things–the cohesion between musician and singers in front or behind the stage was remarkable–and we know how hard Puccini’s score is. The rest of the show was not so good.

Rudy Park was the Cavaradossi character. The Korean tenor was terrific, with his dark voice, he looked like a baritone with a tenor range, and he had a prodigious vocal technique, homogeneous in both the high and the low pitch, expressive both in the piano and in the forte, but unfortunately the audience did not seem so enthusiastic at the end of E Lucevan Le Stele. Do you remember when a famous tenor of the past brought the house down? None of this. It was a simple applause, just because now we are accustomed to applauding. What a pity, as he had such a beautiful voice!

A great singer and wonderful actress was Svetla Vassilleva. She was at first capricious, then passionate and overwhelming, and finally tragic. Tosca wore a splendid red dress at first, then a flowered dress, which brought out charm and beauty. With a soprano, the audience wants to dream. Vissi d’Arte was perfect, strong, and passionate. Too bad, as the audience was too quiet that night, and distracted by Christmas shopping, the applause wasn’t loud enough.

Gabor Bretz was Scarpia, and his makeup looked like a vampire’s. As Scarpia (the bad guy of the story), he was very tall, and his presence aroused terror at the sight only.  A perfect actor for that role, Scarpia’s costume resembled a 20’s Italian style uniform, like that of the policemen. His interpretative ability and his stage presence were quite extraordinary. His voice was probably the better of the show, and his character is the one who most convinced the audience.

The set design and direction did not impress the spectators. The costumes were 20’s style for some characters, timeless for others. High, white columns, a large rotating platform, and video projections are the key elements of the stage design, which symbolize a Rome, not so realistic.  Stylized Roman architecture set the stage. It is like a card game, it’s something that always works. Regret remains, as we see Tosca die of heartbreak. It’s not better, if she, chased by the cops who find the corpse of Scarpia, shouts “O Scarpia, forward to God!” throwing herself from the castle ramparts.

I think the audience will always wait for this, and when there is not a little bit of disappointment, it is always perceived (even in this show performed one week before Christmas). In conclusion, it was a good show without twists, but can Tosca one day surprise us again?