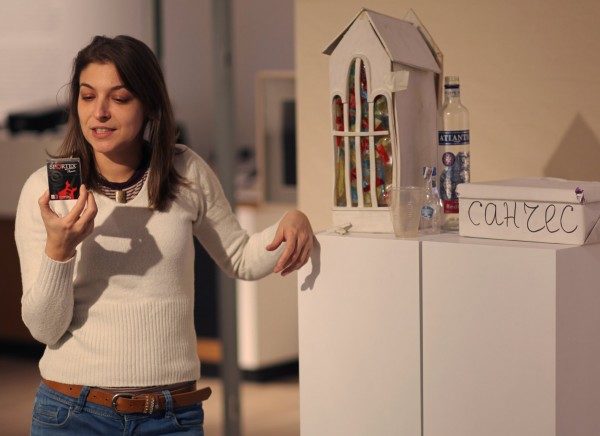 “Close your eyes, we are traveling to Sofia now,” we’re told as we stand outside GRAD, the Gallery for Russian Arts and Design. Upon entering, we find simple white columns on a makeshift stage, each of them holding a (seemingly) random object.

The documentary play starts seamlessly, with the first member of the Theatre Replika group telling us how she likes to collect rubbish and photographs. It seems to be a very direct take-on of “Eastern European rubbish” at first, and one that’s not easy, as a non-Bulgarian speaker, initially to follow – most of the show being in Bulgarian with English subtitles, which can’t keep up with the improvisations. This takes some getting used to, but in the end adds to the show’s authenticity.

The metaphor of rubbish gains more and more meaning as the play moves along. Each of the actors tells a very personal story, and we learn about everyday life in Bulgaria from everyday Bulgarian people. Even though the group are, all but one, professional actors, they use their skills to bring home to us what it means to live, to grow up, to raise children in a country where the government extorts money from its citizens, and a post-communist hangover is still leaving its mark. We learn about Sanchez, a homeless guy entertaining the students of the Arts Academy in Sofia, and his good will, his humor – his humanity –  and collect money for him in a box. We learn about stillborn children that haven’t been recognized as human and are discarded as… rubbish, and about desolated towns at the edges of the country, which have a lot of personal value, but no longer the economic kind. One of the actors comes to a mutual agreement with an audience member that they’ll host each other for a couple of months, and we’re made to feel implicit in what’s going on, not just passive spectators…

Suddenly, a change of scenery: “We are going to London now!” After learning what things we need to bring – garlic, for example (as an antibiotic) – we are briefly abandoned back outside in the cold.

The stage has changed to the other side of the gallery as we return, and one of the girls greets us with bittersweet satirical advice: “Brush your teeth and wash every day! Welcome to London! Smile! Girls, don’t prostitute! Don’t steal!” It’s hard-hitting and effective. We wish that more of the audience weren’t foreign in fact, because the way these prejudices are used against us so light-heartedly and with such biting satire really brings the point home: we’re all just people trying to have a decent life, Eastern European or not – even though the headlines of the populist press and plenty of politicians may differ.

The second part of the show, rather than being about immigrant life in London, concerns the people who’ve considered leaving Bulgaria, but didn’t: they have family, lovers, friends at home, and love their country despite its flaws. One of the most moving accounts is by a young actor who tells of his wish to have a daughter: impossible, as he can’t provide for her in Bulgaria. Does he have to emigrate, to give up his dream job, just to afford a family? It’s this confrontation with “real lives” through storytelling, personal recordings, and videos that make We Are The Rubbish From Eastern Europe so effective. 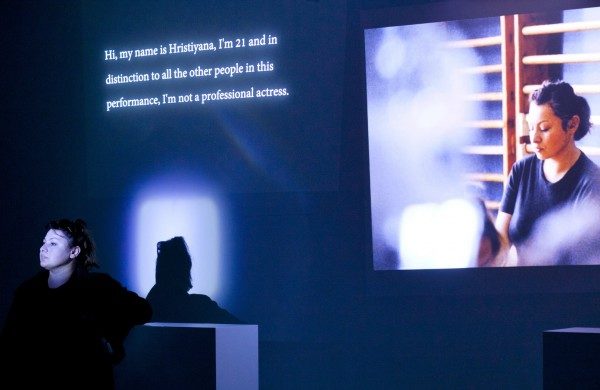 The show is human, personal, funny, imaginative – yet mordantly political and heart-breaking too. It doesn’t ask “big questions,” but focuses on individual lives that give us glimpses into a society far away – or not so far away after all? As the play finishes, one of the actresses plays a song: “Eastern European Rubbish, Get Up!” It’s simple, catchy, and revolutionary – there’s no undertone of violence, but instead a strong appeal to us “normal people”: you don’t have to let yourself be undermined by governments or prejudice – do your best to find your way. Though it’s most clearly expressed in the final song, the whole evening puts across the message, and in such a vividly thought-through and heart-warming manner. For that alone, We Are The Rubbish Of Eastern Europe is a play everyone should see.

This article originally appeared in Central and Eastern European London Review on November 18th, 2016, and has been reposted with permission.