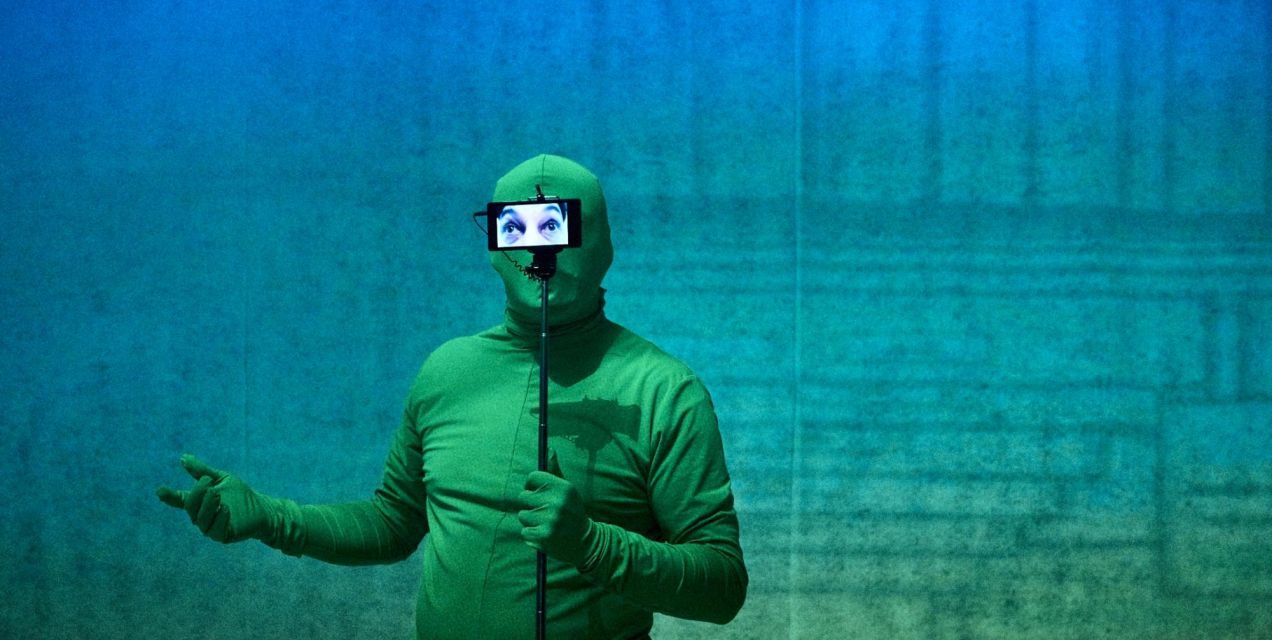 Interview with Tomáš Procházka, one of the founding members of the Czech performing arts group Handa Gote, about old media, physicality and one of their latest production Eleusis.

How did you go from attending an engineering secondary school to staging creative performances?

I think engineering school was a mistake, which I tried to rectify by attending art school. Later I felt like I needed to connect both things somehow, and, luckily, I found a couple of like-minded people.

How did Handa Gote come to life?

We were collaborating with Veronika Švábová on various productions and we suddenly came up with the rather naive idea of creating a group. We asked technologist Jakub Hybler and stage designer Robert Smolík if they wanted to join us. Later on, light designer Jan Dörner joined the group and recently programmer Jonáš Svatoš. It was not at all pre-planned but it worked out between us from the start. This is probably due to the fact that we share many mutual interests outside of the theatre. Throughout the years we somehow managed to create a distinctive style, as the end result of a long research process. 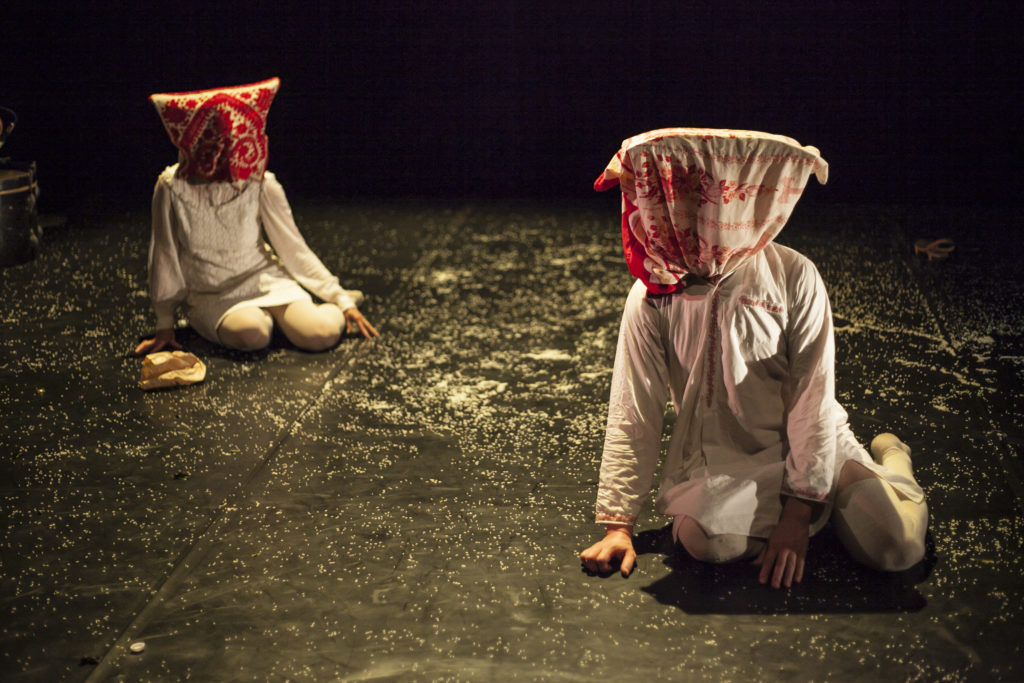 In Handa Gote’s you often use different kinds of old and new technology. Do you think these tools add to the liveliness or interactivity of the performance?

We don’t like to talk about interactivity much. We think every performance is interactive when the audience is present. I see modern interactive tendencies as more like some kind of ‘game of interactivity.’ I think what we do is more about performativity. Using machines and devices on stage is an activity which is nice to observe, and mostly simple, plain, and free of any display of our theatrical mastery. Finishing a task on stage is the best form of acting for us. So it definitely brings out a special sort of performativity, and you may say authenticity because things are really happening here. Old media, or physical media in general, are interesting particularly for their physicality. They make the services or operations visible. We put everyone on stage. We like to see people working, rather than acting.

Can you tell me more about what you mean by “game of interactivity”? And do you think it is more like a fad or passing trend in theatre?

In interactive installations and performances, you have only a few steps that the audience can affect. The interactivity is kept within close limits. The structure is usually fixed and is not altered in any way by the interactive audience. I have difficulties with the notion of staged interactivity. I think it is a trend trying to find something which is already present in typical performances. People have always been interactive in virtue of just watching, trying to understand, and having positive or negative thoughts about the performance. 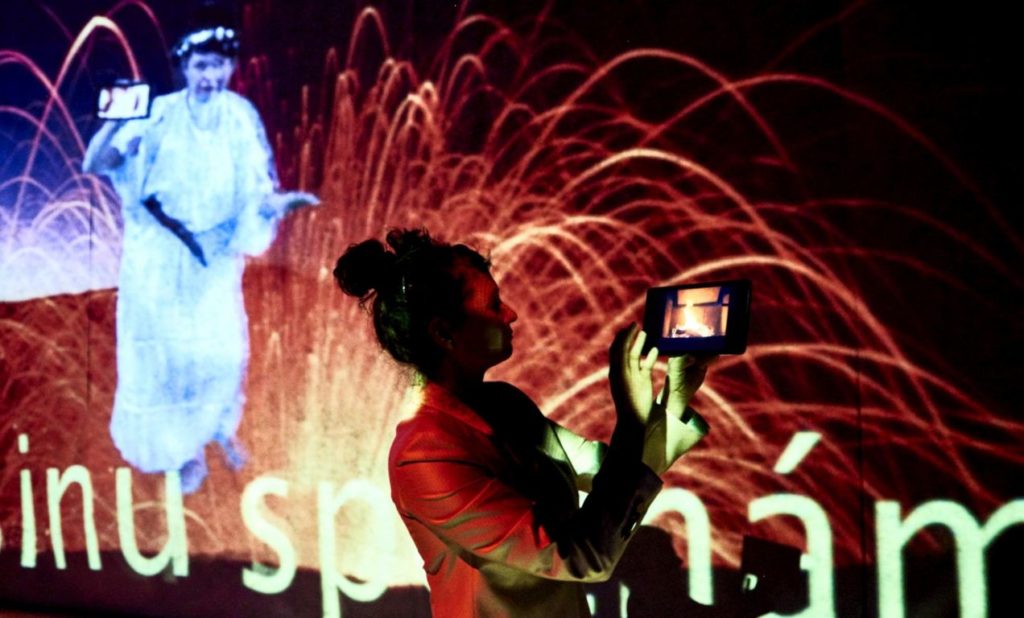 I browsed through your performances and got the feeling that you are using more “traditional” rather than the latest technologies? Are you more committed to “traditional” technologies, or are you using them deliberately because of the “atmosphere”?

Yes, atmosphere is one thing, of course. But we like to show how things work, and you can’t do that as much with modern technologies. We like the physicality of it. And the important message is that some of the things we use have been in service for decades now. This will never happen with the new devices. They are meant to break and disappear. They are disposable, soulless things. The old technology was built to last. It is often a piece of art itself.

Your latest performance, Eleusis, seems to bring us into a digitally composed pop-art arena. Did you want your audience to experience this new arena as such, or did you have some different interpretation in mind?

It’s hard to give one interpretation. In fact, I think we should not give one because it excludes all other possible readings. But in the beginning, we were thinking a lot about cheapness and banality as a form of hell, even though the Greek underworld was not a “hell” as we usually imagine it. We were thinking about the environment, as we often do. Also, there is a lot of random stuff happening in the video that people actually reacted to it in a positive way. We thought some things were scary, but people actually found it funny. So I guess its silly and scary at the same time.

In Eleusis, you are using video mapping. What does it symbolize in this always-changing field? You are also including technical messages in the projection – was this “transparency” intended?

All the transparency is intended. We need more of it. There is still too much hiding in the theatre. We use video mapping as a kind of cliché, and we also employ other clichés from audiovisual art, like sonification. We let the computers generate random video sequences, based on tagging. We throw the whole insanity and cheapness of the Internet on stage, and let the actors dance and sing in front of it as well as inside of it.

You are also “mixing” the videos in Eleusis live – if I have seen it correctly – do you think that live “digital responses” are changing the actors’ “performance”?

I am not sure if it is always changing the actors’ performance. In most parts, the video works as a parallel message or commentary on the stage action. But it is definitely changing the audience’s perception and the technical performance. Live mixing is adventurous, a lot of work, and produces adrenaline. All of that alters the performance in general. 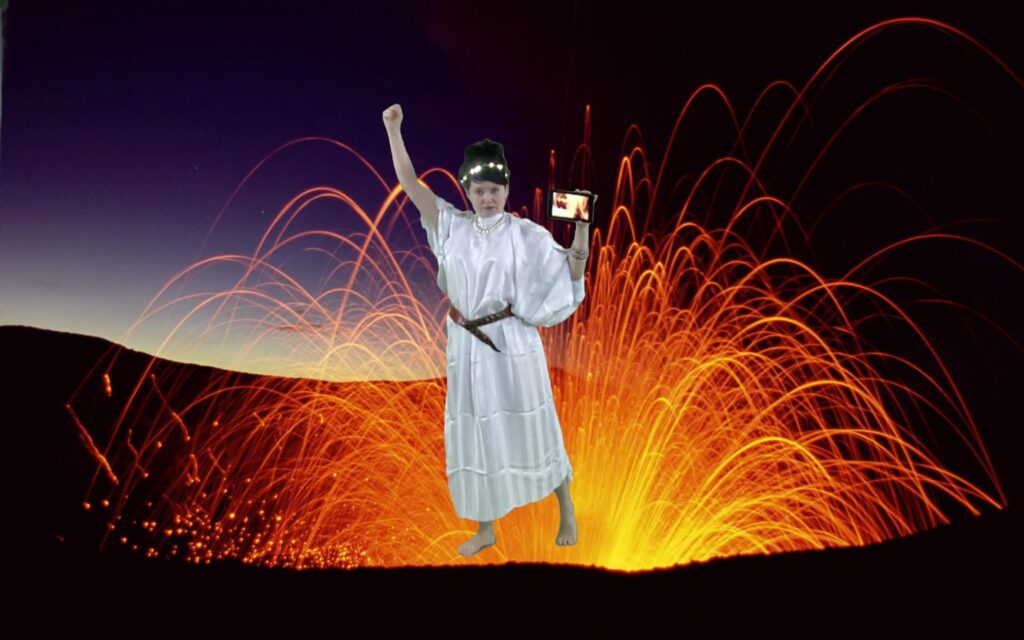 What is the funding system in the Czech Republic? Are there special funds for creating performances that use the newest technological tools? How do you afford the purchase of the different accessories?

I guess all the funding we get is for the theatre production. It’s very difficult to describe the outcome otherwise, and we don’t really do any educational programs for instance. So what we do is still theatre, no matter the technology. We are supported by the Ministry of Culture and by the City of Prague. Thanks to this support we can afford the production of new shows. Now we own a few pieces of equipment because we have been at it now for over eleven years. Of course, each of us brings his or her own equipment as well, or we sometimes borrow stuff if we need something very special. But we try to simplify things as much as possible. We also recycle as much as we can.

Are you also collaborating with other technology professionals, or are you experimenting on your own?

I feel we are part of a local community of audiovisual artists. Maybe we have stronger ties with that community, and the experimental music scene, than we have ties with any theatre circle. Or at least equally strong ties, for sure. We used to work on our own for a long time, but recently we have become more and more open. We operate in the field between theatre, visual art, media art, experimental music, science, and technology. Not everyone is interested in that mixture.

With whom exactly are you cooperating more recently?

We worked with visual artist Pavel Kopřiva, the experimental filmmaker Martin Ježek, the filmmaker and musician Georgy Bagdasarov, and we continue to work with Finnish performer Pasi Mäkelä. And, in the near future, we want to collaborate on a project with the Russian group Akhe.

This article was originally published in the ZipScene Magazine. Reposted with permission. Read the original article.