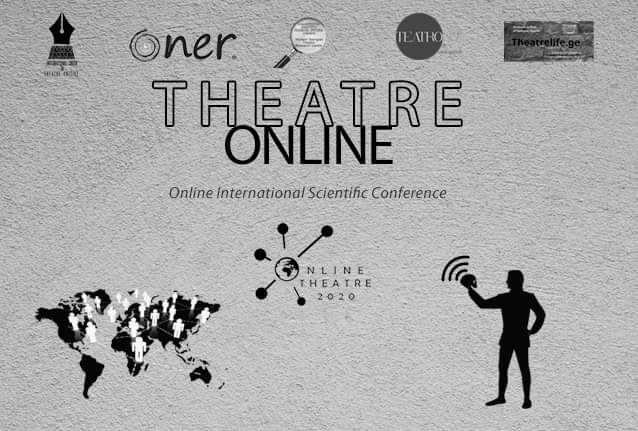 Poster of the online-theatre conference by International Union of Theatre Critics by Ali Hajili.

Theatre has survived thanks to its mobility and potential to exchange creative ideas. Since its inception, it has been open to the circulation of different practices, approaches, and conscious action. It is a platform for communication – an exchange of ideas, or partnership if you will. However, the clear identities and cultural roots of individuals do not lose their significance, because theatre cultures meet, collide, and ultimately interact.

Theorist and philosopher Roland Barthes wrote in his 1963 critical essay that theatre is a kind of cybernetic machine. In its idle state, the machine is hidden behind a curtain. But as soon as it opens, it begins to send you a series of messages. Just like paintings, literature, cinema, and pop music, theatre can broadcast ideology, style, quality, standards of living, values (including national ones), and the mentality of a nation. It can demonstrate creative potential, and the ability to generate ideas and technologies, including the potential creative power of a nation.

In the midst of the current pandemic, theatre and other performing arts are undergoing a period of crisis. But crisis contains two components: danger and opportunity. The danger is talked about more often, which is normal because a person is prone to negative thinking, as the theatre is to dramatization. The initial period of “theatre on the verge of a nervous breakdown” has largely been overcome, and many theatres have found a way to adapt to new circumstances – once again proving the vitality and amazing energy of this art form. The theatre is separated from its audience, orphaned for a while, but quickly began to use digital technologies and streaming tools.

Performances with digital elements or those performed entirely online are not headline news but before lockdown, it was mainly the experimenters who used digital technologies. Yet now, online access has become the only way for the theatre to survive. Live broadcasts, recordings of performances, online readings, demonstrations, and interviews conducted in real-time have all become the new standard. As before, the viewer – who is now in forced isolation – has the opportunity to choose how to spend his or her evening on the couch. I am sure that many of us have already found that the broadcasts of various theater productions can grasp the profound inside, and we again find ourselves in a situation where it is impossible to grasp the immensity because the choice of online performances is huge.

Of course, one can argue that theatre loses its energy in a recording, and even live broadcasts of performances do not convey its liveness. Although one thing is crystal clear; the recorded performance is preferable to no performance at all. As one of Chekhov’s characters said, “It is impossible to live without a theatre!” It would seem that today we are convinced of this, as we have possibly never been before.

It is curious how theatres not able to directly communicate with the audience found a way to adapt so quickly. They started with their own archives. Many of us in quarantine began to actively organize our materials and archives, which theatres began to carefully study and open to the public. For example, the Moscow Pushkin Drama Theatre opened access to the video recording of the play Turandot by Konstantin Bogomolov. This performance ran for only eight performances and was then removed from the repertoire. It seemed that it had left us forever, but the audience got a unique opportunity to see it, albeit in video format. This was a true theatrical event, and just one example out of many.

The most valuable aspect of this situation was the opportunity for the audience to find time to turn to recorded broadcasts of performances held decades ago. Amidst the bustle of day-to-day affairs, we all struggle to find the time to do this. Because we have to give time to watching new productions (given that theatrical life provides no respite), old ones are neglected. But, now there are great opportunities for such endeavors. This is extremely valuable because we can see the legacy of the past and discover that old does not mean the obsolete. For example, many performances from the Soviet-era seen in today’s context open up new meanings for us. We can study and compare interpretations of various plays, evaluate the style of acting, consider cuts and edits to the text, or simply enjoy this time travel.

We also have the opportunity to view recordings of performances that we have seen on stage before. We can compare two different perspectives of the same performance – from the auditorium, or from home. Watching the video is enriched by our experiences and impressions from our memories of the live performance. We can also see the performance with a fresh perspective, which ensures that theater is a living art. Even watching the same cast is of notable difference. Although the charm of live performance is lost, our audience experience is enriched in other ways and memory comes to life with renewed vigor.

Under the current isolation situation, continuing the dialogue between spectators and theater-makers is necessary. This dialogue should not be paused but should be reborn in new forms. The following components are important to me under the current circumstances:

1. Rethinking
From live streaming to online rehearsals and discussions, theatre staff must learn new forms of conversation that engage with the public translate their artistic aspirations into the language of modern technology. It’s important not just to put out creative sparks, but to be able to adapt to new conditions and digital infrastructure: to experiment, to find new forms of self-expression, to realize that art is possible in any “proposed circumstances”.

2. Selection
Theaters and their creative teams need to choose the best tools for streaming productions and other online projects from familiar platforms such as YouTube, Facebook, and Instagram as well as apps like Zoom and Crowdcast. It is important to decide on the format that is optimal for the project and for the audience. Whether taking part in live video rehearsals for future performance or discussing online performances from the current repertoire, broadcasting archived recordings, or organizing a flash mob including a loyal audience – it is important to choose and compare the relevance of various digital tools. Each platform has its advantages and disadvantages, both from artistic and practical points of view.

3. Accessibility and contact with the audience
It is more important than ever for theater companies to maintain the attention of their loyal audience base. However, there is also a chance to attract the attention of viewers who previously preferred others. It is important for the theater to remember its followers on social media and to engage with them by demonstrating future plans. We currently live in a state of uncertainty that adversely impacts our mental health, so the prospect of an upcoming premiere will undoubtedly have a beneficial effect on the psychological and mental state of audiences and theatre staff.

Self-isolation does not always affect our creativity, but adapting lectures to suit an online format and conducting creative discussions about cinema and theatre projects is a challenge. For performers, it is difficult without having the live reaction of an audience, and audiences miss feeling the energy of the interlocutor. Nevertheless, it is possible and helps to maintain productivity, flexibility, and creative thinking. Thanks to message apps and social networks, new collaborations between actors and playwrights, and directors and performers, have become possible. For example, my newest project conducted casting and rehearsals through the use of video calls.

The current situation will also serve to unite the theatre community. This will also help to ensure the survival of the theatre industry. Though many projects are currently free of charge, it would only be right to donate to the theatres. This support is morally important, but if not financially possible, audiences can support their favorite theatres and artists through positive activity on social media. Kind, considerate words are healing – whilst in quarantine in Italy, I received an email from the editor of The Theatre Times with support, vital information regarding COVID-19, a list of links to useful online resources, and a group for the website’s writers where they could get psychological support. It was a breath of fresh air.

This is all part of the magic and energy of theatre and its community. It is based in human connection, which is fundamental to our wellbeing. It is also one of the reasons we love theatre and shall continue to do our best to support and serve it.