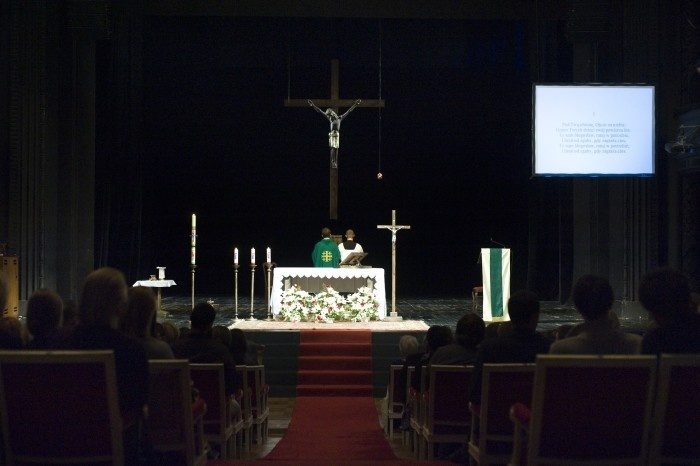 Artur Żmijewski did something seemingly simple, something which should’ve been done a long time ago. He transplanted mass onto the theatre stage, directly, with no changes made.

When you’re someone who went with his grandma to every possible church activity there was–May devotions, rorate masses, recollections, rosary prayers, June devotions, plus the regular Sunday service, you’re probably someone who thinks he has mass all figured out. Regardless of whether you believe and how fervently you worship, church rituals–due to their repeatability and the safe routine practiced by the priesthood–don’t have much to offer in the way of spiritual experience, and participation in the Sunday mass is reduced to fulfilling a few obligations required by the Church in the name of God. Charismatic priests, mystics preaching fiery and wise sermons that deeply move even the unbelievers are extremely rare while showing up every Sunday just to “check in” is neither subversive nor transgressive. It isn’t even an action in itself, it’s merely a gesture. I don’t know whether it’s an empty one, I guess everyone has to judge for themselves. 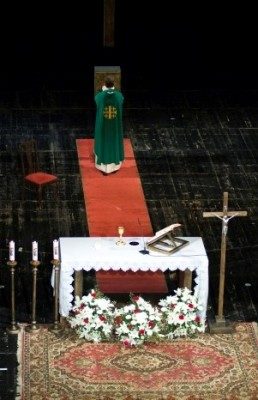 Artur Żmijewski did something seemingly simple, something which should’ve been done a long time ago–he transplanted mass onto the theatre stage, directly, with no changes made. In the middle of the stage he placed an altar draped with flowers, he hung a cross, and set the candles. A harmonium with an organist stood to the side, while girl choirs took over the proscenium balconies. The only thing missing was the flame on the Paschal candle. It even took place at the appropriate time: mass was said on Saturdays and Sundays, because as we know, attending mass on Saturday evening means you “checked in,” so you have Sunday off. The only–but fundamental–difference was that the altar was standing in a theatre, and instead of priests we had actors–not that this was such a sure thing. After the spectacle is done they come out to take a bow so that the illusion might disappear, but you can’t know at first glance whether someone was ordained or not, so you still might be fooled.

It’s hard to pick out the differences between a real mass and its theatrical copy. Despite the lack of any attempts at iconoclasm or desecrating anything, the entire thing provoked a great commotion and sparked the predictable outrage of the right-wing press. Of course, if you’re looking for a scandal, you’ll find it even if it means making one up. If I were observing the event from the perspective of the Church, I would be offended only by the fact that Żmijewski cast completely bland actors with no charisma as the priests, thus decreasing the significance and potential of his mass. But that’s a reflection of the behaviours exhibited by a major part of the priesthood–they recite formulaic statements without any amount of discernible passion in their voice–passion isn’t necessary during mass. In the theatre, the situation is reversed–the discipline is severe and lack of emotional involvement causes the entire play to fall apart–but that’s another thing entirely. 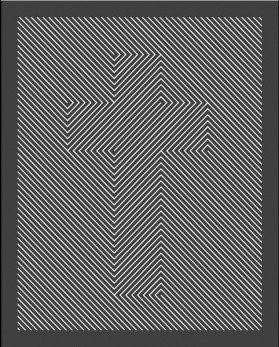 Żmijewski’s transplant has little meaning for the Church but is very important for theatre, perceived not only as a place where performances are replicated but as a place where true community is created within the audience; it also revealed certain mechanisms that theatre acts through, or should I say theatrical yearnings, which it might be worth mentioning, can be realized outside of the theatre. A simple reversal of symbols has awakened a religious longing in the theatrical audience, a longing which we might try to compensate for by looking for theatrical experiences. It might be that theatre, with its tendency to address the intimate and strong emotions works in different registers than the transmission of mysteries of the Catholic faith. But both the theatre and the church are bound in a union.

The color black was the most painful part of that white mass. I call it “white” because it was said without any discernible emotions, without emotional involvement. Essentially, they’re not making theatre, even though speaking like that is one of the means of expression available to actors. The elements of the church scenery were sticking out of this immense blackness, the white of the altar cloth so bright against the black backdrop. It was really hard to discern the direction that the blackness was working in. You couldn’t tell whether the altar was rising up from it or the blackness is ready to swallow it whole. In church we’re usually bathed in light, surrounded by depictions of scenes from the Gospels, scenes which despite showing immense cruelty (crucifixion) and martyrdom of multiple saints aren’t making us queasy, they became ordinary. The backdrop behind the altar is bright with paintings, sculptures, and gilded elements, whereas the stage during Żmijewski’s mass in Teatr Dramatyczny was draped in black emptiness, the theatrical void we never notice staring straight at us, intransigent and unpleasant. Tinged with fear. Maybe that’s why the altar, despite being fake, was the focus of everyone’s attention? The division into the microcosm of the stage and the macrocosm of the world has suddenly become very real, tangible, palpable. When faced with a threat, the threatened tend to unite. But there were many more reasons to feel scared, one of them being the uncertainty as to the direction that the event was going to take.

Even though I attended the second performance and it was clear what the event was about, we were still afraid of being forced to participate, to react, to make decisions whether we’re going to stand up, kneel, sing, whether we’ll take communion and leave something on the collection plate. The last decision was actually the easiest one, especially given the fact that the money collected that day (it was the eve of All Saints’ Day) was supposed to be given to the Jerzy Waldorf Committee, a non-profit group that works to save the old Powązki cemetery. We were all eager to leave something on the plate, but after the spectacle ended, someone posted the entire collected sum on the door of the theatre–it turned out it was only 300 PLN. Only two people took communion, and one of them was a stand-in prepared in case no one from the audience would go. Nobody stood up, kneeled, sang with or responded to the priest’s words. However, the relaxed mood that permeated the theatre before the spectacle quickly evaporated. Everyone stopped quipping about the last time they were in a confession booth or left something on the plate. The atmosphere got dense, almost becoming unbearable. The torment of sitting through mass in absolute silence. The torment visible on the face of the actor-priest, clearly embarrassed by his weird position. The torment of the audience, who have all the necessary responses and hymns on the tip of their tongues but want to remain spectators without becoming participants. It was a clear example of passive resistance. If we wanted to illustrate that term for the dictionary, a photograph taken during the spectacle would do just fine. Even the Sign of Peace didn’t have many takers. A wall of pretend indifference, even more fake than the fake mass. At the same time, this resisting audience wanted to participate in something serious and rousing, or maybe in something that would rip them away from the monotony of everyday life. In short, they placed the same hopes in the mass as they would in a spectacle: the important thing was the desire to participate, and at the same time participation was blocked. Maybe it was the fault of the lights that were never dimmed? The lights are never dimmed in church (with the exception of Dominican churches). This collective paralysis was very mysterious. But it was probably predicted, or even planned, by the performers. Unmoved until the end, the audience breathed a sigh of relief when the performance was over and reality came back to its normal, routine state. 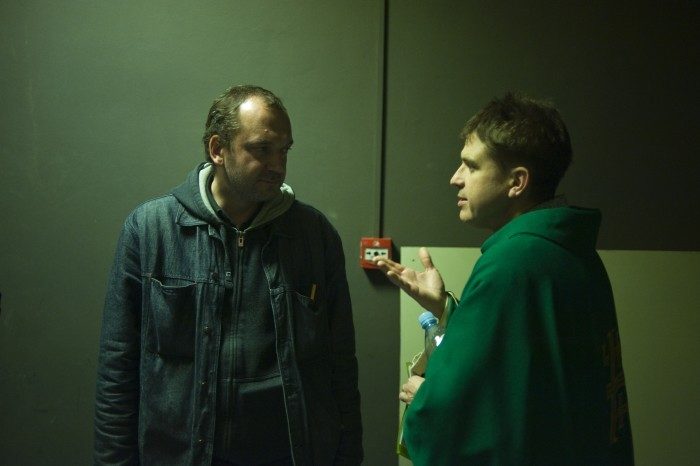 The sermon was the moment of crisis. It’s the one element that’s outside of the preordained scenario of the mass and is left to the ingeniousness of the priesthood. In practice, it’s the most political and manipulative part of the mass. That Sunday the sermon was about the priesthood. It started out with allusions comparing being a priest to being an actor and later encouraged the cultivation of modesty and the idea of selfless service. It ended with undermining the words of a “leftist philosopher,” who claimed that “the revolution is at the gates.” But he was wrong, it is “the Gospel that is at the gate.” The Church we saw in that sermon is the one we all dream of: all about selfless service, renouncing its own ego, its power, and its narcissistic self-love. Similar theatre would not be that far from the audience’s expectation. The problem is that we always believe more eagerly in revolution standing in our gates than we do in the Gospel.

Nothing really changed. All that will be left of The Mass is a few descriptions, a recording which will probably live on at the Berlin Biennale. The outcry and outrage of the right-wing newspapers, which turned this white mass into a black Satanist desecration, died out as fast as they arose. We’re already used to the fact that artistic events don’t really change the course of the world (with a few exceptions). But there was something unsettling in that mass, something that I can’t let go. It doesn’t scandalize, it disrupts; it makes you think about the lack, or even loss, of a certain place–maybe a utopia, if it weren’t for the people. That’s why I prefer to go to mass than to a theatre. In theatre people are able to spoil everything as well. But they don’t have any God-given authority, they have to fight for it. Maybe that’s why sometimes they succeed with staging a black mass which won’t let you relax long after you’ve experienced it. Meanwhile, churches are places of peace, preordained to stand as the only intermediary between us and the Absolute and eternity. Theatres straddle that kind of chasm only once in a while, always by choice and as a result of some intense activity. And thank God for that.

This post originally appeared on Biweekly.pl in January 2012 and has been reposted with permission.