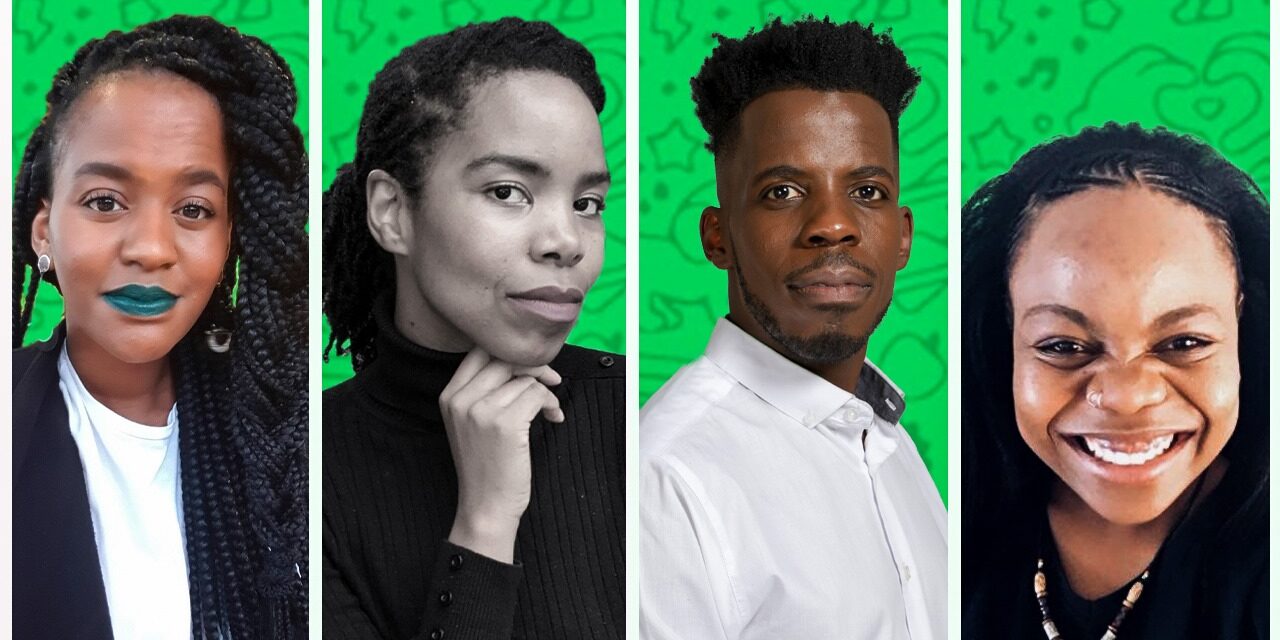 Just when theatre audiences were drowsing over YouTube and Facebook live streaming and wishing a return to physical theatres after lockdown, a South African performing group took them by storm. They produced an online play, The Shopping Dead, on WhatsApp. Yes, WhatsApp, that popular messaging app.

Even in this era of virtual theatre, it was a new concept. Just imagine joining a WhatsApp group, ‘sitting and watching’ a play in your palms or laps. Quite interesting, right?

But how did the idea come about? What does this mean for theatre on the African continent? I put these and other questions to the team that brought us probably the first WhatsApp play. Here are the excerpts of our zoom interview.

‘I put my application in on the last possible day… at that point, I had no team.” Confesses Faye Kabali-Kagwa, the producer of the play.  ‘About a week later NAF (National Arts Festival) called me. They really wanted to take it further, they wanted to know if I had a synopsis, if I had a writer, who my team was and then I knew that I had to get cracking really fast.’ A few more weeks later, the play premiered at the Virtual National Arts Festival for three sold-out shows.

As the virus spread and most of the world started shutting down, it dawned on most of us who are not considered essential workers that we’d have to stay home, work from home, keep the children home, and generally avoid spaces with large crowds. Theatre spaces were no exception, prompting creatives to find alternative ways to keep practicing and producing Theatre. Many jumped on virtual performances and streaming previous shows on Youtube and other platforms. Joburg City Theatres for example started streaming some of their production, festivals like the Stephen J. Chifunyise International Theatre festival moved all their activities online in March and had a successful run, and many others would follow suit.

Faye noticed something though, ‘I thought that that was going to narrow firstly our audience because then you are only talking to a particular audience that has connectivity, that had data, secondly our actors in South Africa –  a lot of our actors – do not have connectivity at their houses.’ Expecting people who rely on the Theatre for space, equipment, and even transport sometimes to attend rehearsals to thrive for months was unacceptable, so it was important to find a medium that’s accessible for both the actors and the audiences. WhatsApp seemed to be it. There is entertainment in online conversations and comment sections on platforms like Twitter and Facebook and others and Faye Kabali-Kagwa came up with a brilliant idea to adapt and package that kind of entertainment and present it as an accessible play.

All she needed was a little encouragement from some friends to submit her proposal. With a commitment to NAF, it was time to put together a team. Faye had seen Johannesburg based writer Ncumisa Ndimeni’s work at POPArt’s Incubator 7 and knew she was the best person for such an experimental play. And so, ‘Hi, I have this idea. Are you a game? Also, in five days I need a synopsis and then I need you to commit to giving me a script in two weeks’, Faye’s recollection of how the phone call must have gone since the two had never met.

Ncumisa said yes. She just wanted to explore her range as a writer and this was an opportunity to challenge herself. After the writer, next on board was the director. Enter Lesego Chauke, a Ph.D. student at UCT Centre for Theatre, Dance, and Performance Studies under the Re-Imagining Tragedy in the Global South (RETAGS) program. ‘I had not seen a play in a whole month and there was no prospect of seeing a play any time soon.’ Admitting that with this thirst, she could have said yes to anything theatre. A few phone calls later, Kiroshan Naidoo, Chris Djuma, Kathleen Stephens, and Tankiso Mamabolo joined the team as actors.

A WhatsApp play is a concept that none of the people on the team knew, but everyone recognized that it was a revolutionary concept and they wanted to be a part of it.

Being at the helm as the director, Lesego understood that this was no ordinary play and that her director’s approach would have to be different. The multi-talented Cape Town-based theatre-maker decided she’d be ‘the holder of the vibes.’ Her goal? ‘Having open energy where people can play.’ And play they did. The playwright had created archetypal characters relatable for everyone. ‘We know WhatsApp groups; we’ve all been in WhatsApp groups, we know that guy who always types in capitals, we know the person who only ever speaks in memes, the person who only voice notes,’ Lesego observes. The team brought with them these experiences and through a wholly collaborative process created this WhatsApp sensation. And their audience loved it!

It’s a WhatsApp play, it is well choreographed with the perfect rhythm, only the actors can send messages, and there is a successful preview to boast of, what could possibly go wrong? Well, there was no shortage of issues for the team to deal with and ‘get over’. Two things that they had not anticipated were first of all, how much a large number of people in a chat group would slow down the connection and pace of the messaging and in turn, the play. Thankfully, they had planned a faster rhythm so that when having two hundred people in a group affected the bandwidth, the pace of the play was not affected too much.

Then came the issue of theatre etiquette. We all know how rude it is for people to walk out of the theatre during a performance. Now if you have been in a WhatsApp or any chat group, you know that when someone exits the group, everyone on that chat will notice. For The Shopping Dead, while groups had a capacity that meant people would not join after a particular number, there were no rules or limitations to how many people could exit the group or when and so naturally, people left the group, some just a few minutes into the play. This not only interrupted the show that was in texts, audio files, memes, voice notes, and alike but was also demoralizing for some of the creators. It was hurtful. Lesego remembers ‘It had a similar sensation to when you are performing live on stage and then someone gets up and walks out. It felt exactly the same way.’

Lesego continues, ‘It felt rude because we were still hanging on to theatre conventions even though we’ve moved mediums.’ At the debrief after the first show, they knew they had to adjust and eventually decided to focus on the positives.

Accessibility and Inclusivity of Virtual Theatre on the Continent

Virtual shows and live streaming of production is a convenient way to consume theatre in the comfort of one’s home. But there is a catch. First of all, you need an electronic device in the form of a smartphone, computer or other devices. These do not come cheap. Beyond this, one needs an internet connection to access any of the platforms.  So I pushed the creatives further. On a continent where a large percentage hasn’t the means to own a smartphone or computer, where an even larger percentage has no access to the internet, how do we bring more people in and make sure they have access to theatre in a virtual space?  Emerging actor and writer, Chris Djuma who plays J quickly acknowledges that although needed, moving theatre online ‘deprived many people of access to any form of storytelling or theatre at all.’ However, with the pandemic raging on and no hope of normal theatre for the foreseeable months, the team believes that there is a happy medium here especially with WhatsApp being the most accessible means of online communication and possibly the most downloaded App on the continent.

Theatre after the Pandemic

As many people find innovative ways to practice and provide performances to their old and new audiences. The discussion on the future of live theatre or how it will look is ongoing too. I put it to the team behind The Shopping Dead and they are hopeful and indeed have faith in the practice. Lesego notes, ‘Theatre is a medium of survival. It always survives, you know. There is always a threat to theatre [but] it survives because it’s always open to influences from other mediums.’ Chris who left his corporate job a couple of years ago to explore the world of theatre believes ‘It’s the quality of storytelling that survives.’

This team decided to make lemonade from lemons and are looking at the brighter side of it all it seems. For example, Ncumisa thinks there will be a surge in the numbers of theatre-goers because people will be hungry for live performances and existing in the same space together. Or just fresh faces that have been exposed to theatre through virtual mediums

Lesego believes that because of these experiences ‘the dynamics between the live and the virtual is going to be richer now that we have had the time to play in the virtual as well.’ This is true and something that theatre makers around the world can tap into by finding creative ways to integrate the virtual into live performances in the shape of multimedia, opening up performances to both live and online audiences, and carrying this on in marketing strategies for upcoming shows.

The other bonus is the engagement between audiences and performers. Kabali-Kagwa points out that many people left feedback and shared their thoughts on the show when the group was opened up after the show. This of course is not a common practice in live theatre. The curtains go down, the actors go backstage to get out of their costumes, and go out to meet their friends and family and back to their lives. Only the critics with platforms are privileged with the opportunity to weigh in and share their views on productions. But picture a Facebook video live or otherwise or a comment section on YouTube, comments on a Twitter thread, and recently zoom chats where participants/viewers have the opportunity to share their thoughts on the show. Obviously, allowing or disallowing comments from faceless strangers is something to debate but that channel can not be overlooked.

What next for The Shopping Dead?

There is no doubt that the play was a creative and fresh undertaking. It was a success that a month later, people are still asking when the next one would be. Well, those people should keep their fingers crossed as for the team the sold-out shows at the National Arts Festival were not the end. According to the producer, Kabali-Kagwa, they are keeping the conversation around the show going and are open to invitations to talk about the play, collaborations with other creatives, and are looking for ways to bring the experience to more (possibly paying) audiences in South Africans and other theatre lovers elsewhere in the world. 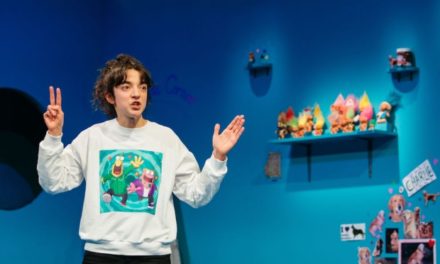