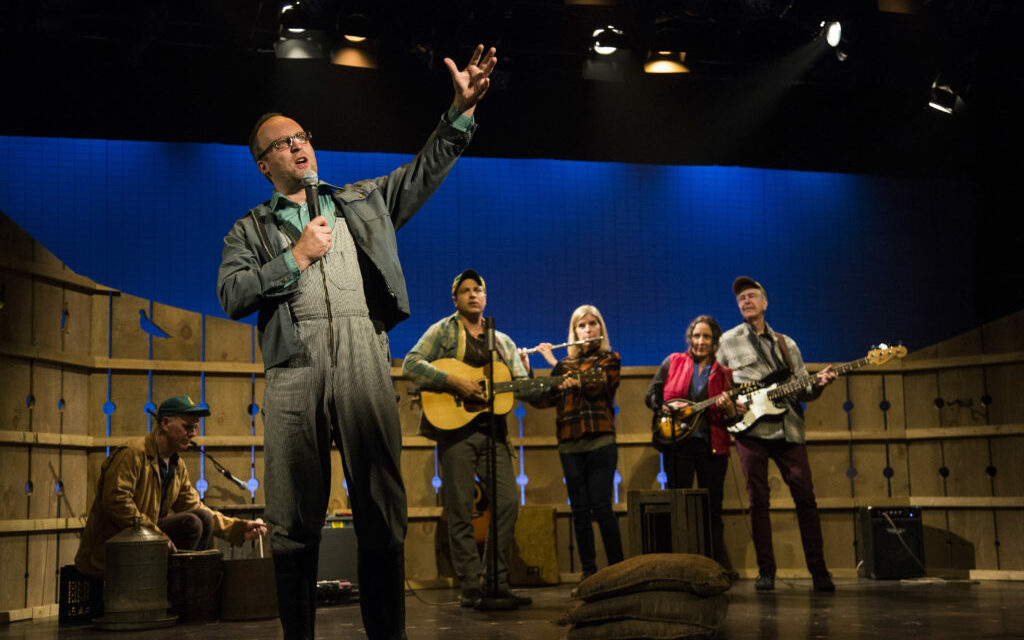 Gil Garrratt and the company. Photo by Terry Manzo.

The National Arts Centre’s latest acquisition, The Pigeon King originally from Blyth Festival and starring the Blyth Festival cast, is an outstanding southwestern Ontario country musical comedy built around one of the most outrageous pyramid schemes Canada’s ever seen, the Pigeon King International scam of the early-to-mid-2000s that saw hundreds of farmers switch over to raising pigeons with disastrous results. This is a case of fact being stranger than fiction, and the Blyth Festival crew have turned the facts into a play that makes a worthy addition to the Canadian canon.

The Pigeon King is a collective creation. Every actor has co-creator credits. Creating the play involved interviewing hundreds of people affected by Arlan Galbraith’s reckless scam, reading investigative articles from the time and the company’s organ, The Pigeon Post, and poring over weeks worth of court documents. Arlan’s many monologues, such as his passionate speeches at company events, were taken directly from his own writings. The court scene, which takes up the entire second half of the play, is made up of his own words, and even the other fictional characters are heavily inspired by victim impact statements.

Blyth Festival Artistic Director Gil Garratt plays Arlan, and he expertly brings Arlan’s quirks and idiosyncrasies to the stage. These come out best during the second half of the play, when we see the inner workings of Arlan’s mind as he interrogates witnesses on the stand, bombarding them with rambling questions, character attacks, statements-as-questions, and name-calling. If he was a bit of a strange figure in the first half of the play, he comes across as unwell, even disturbed, in the second half. But the Arlan we get to see in the play’s first half is a captivating, convincing figure—even though the audience knows from the start that he’s a conman, we’re drawn into the scheme with him. We’re placed in the boots of the farmers he’s selling to, caught up in the opportunity of an easy business venture. Arlan talks a lot about saving the family farm. It’s what brought farmers into the scam in the first place, and it brings the audience in too. From Arlan’s first lines, Garratt is a convincing lead. He turns this conman into a figure we want to believe in just as much as the characters in the play.

The rest of the company are multitalented actors, singers, and musicians who effortlessly play several roles each, including farmers, lawyers, Pigeon King employees and salesmen, and the journalists who first broke the story of the massive scam. The cast—Rebecca Auerbach, Greg Gale, George Meanwell, J. D. Nicholson, and Birgitte Solem—switch characters, musical instruments, and singing duties with ease. There’s never a misstep, and each character is uniquely different with their own personalities and important function.

The standout feature of the play is the music and songs. While it’s not a musical per se, old-school country songs are interspersed throughout the action, with instruments performed onstage by the actors, who also handle the singing duties. Performed on such a large stage surrounded by the charmingly rustic set design by Steve Lucas gives it a Grand Ole Opry feel as the actors croon songs about hurtin’ on the farm or tap into the long history of country comedy to roast that “friggin’” Pigeon King. Mandolin, banjo, gentle flute, twangy guitar, solid bass lines, and bucket drums come together for some perfect country music. Incidental music is also sprinkled throughout some scenes.

The Pigeon King is a masterful example of the heights achievable by telling Canadian stories. Set in the heart of Huron County—home of the Blyth Festival—this play brings to the national stage one of the stranger stories in Canada’s recent history. In many ways it’s a piece of documentary theatre, using Arlan’s own words and drawing from hundreds of documents to create a factual theatre piece, but it moves far beyond just documentary-style facts with superb acting and outstanding music that make it a smash hit for Canadian theatre.

This article was originally posted on April 27 on Capital Critic’s Circle and has been reposted with permission.