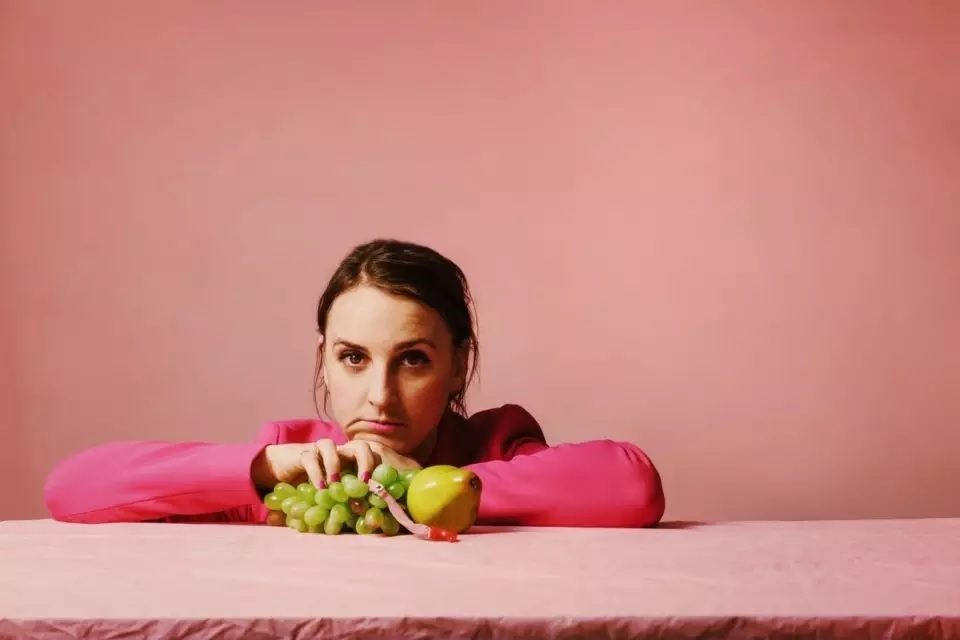 From shows you control with your phone to tap-dancing economics lessons, these comedians do things a little differently.

A pink wriggly worm with big ambitions, a bossy bunch of grapes with a massive mustache, and a hard-of-hearing potato: they all pop up in Lucy Pearman’s new show, Fruit Loop, the uniquely inventive follow-up to Maid Of Cabbage which won her a nomination for Best Newcomer at the Edinburgh Comedy Awards last year.

The main character, voiced by Pearman and frequently acted by members of the audience, is “a little worm from some mud in a village who wants to fly.” So she sets off to find her fortune in the Big Apple and meets various characters along the way. Our guide through this story is, naturally, a bunch of grapes–Pearman in a big, bobbly, green costume, with a waggling cardboard mustache and a Spanish accent thicker than Manuel’s. Why? I don’t know, but it’s a delight to watch as Pearman wins over an initially confused audience to her mad world–and, ever so gently, coaxes them into playing in it with her.

Some of the skits are dafter than others but Pearman’s charm, eccentric worldview, and knack for a striking visual make this a deeply enjoyable hour. I can’t shake the image of her as a worm crawling along the top of a glittery red and gold curtain, singing along to a funk track. Nor the endless sketch in which she plays a deaf potato, which had the audience roaring in the aisles. An indefinable delight.

This must be the most loopily inventive show on the Edinburgh Fringe, which is saying something for a festival which has Famous Puppet Death Scenes in its program. Foxdog Studios are, in their words, “the Fringe’s most qualified IT professionals” and the loose concept of this show is that we are helping them throw a party after the completion of a big work project.

For that, we need our phones and to download a private Foxdog network which will allow us, over the course of the show, to play silly computer games and virtually mingle with the other guests. Mainly though, we are there to help out with the catering, in the form of a “Robot Chef.”

Lloyd Henning and Peter Sutton, aka Foxdog, have built a Heath Robinson-esque kitchen on stage, featuring a wildly over-complicated system of magnets, pulleys, a 3D-printed tractor, and a “head-mounted sausage cannon,” which the audience takes turns to control, with their phone.

So begins the most laborious and collaborative fry-up of all time. It is to the pair’s credit and charm that they somehow manage to imbue the slow cooking of some baked beans with real dramatic jeopardy. By the end, the entire room has united behind their pointless endeavor.

In between this high-concept cooking, Henning and Sutton, play Flight Of The Conchords-styles songs wearing hi-vis and a lumberjack shirt/drum-machine and perform an oddly beguiling number in costume as a giant green duck. It sounds odd, and it is odd, but it also embodies everything that is good about the Edinburgh Fringe and its questing, wacky, creative spirit. I left uplifted, and hungry. 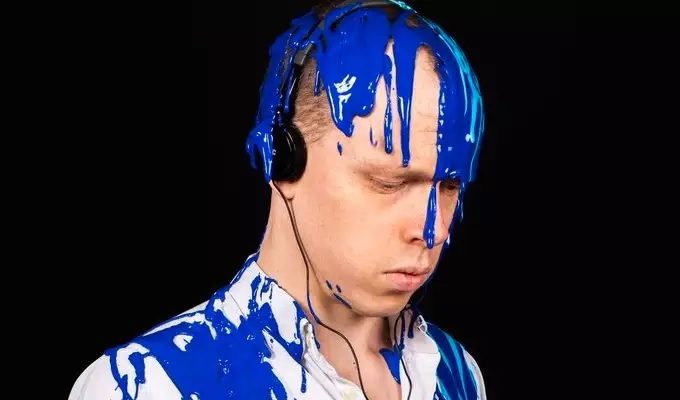 Jordan Brookes has an unsettling trick up his sleeve

Jordan Brookes also makes use of technology in his new show, though it would be giving too much away to say exactly how. The stand-up, who was nominated for the Edinburgh Comedy Award last year, begins lo-fi and low-key, wandering onto the stage in bare feet, chatting about the room, his microphone, the noise from outside.

Gradually, he ratchets up the tension. There’s something just a bit off. He tells us how he broke up with his girlfriend over a joke she didn’t like. He talks about being single and lonely. He wonders, if performing in this space, right now, with us, could be his new relationship. Is it a bit creepy? Yes, and it’s about to get creepier.

Around 40 minutes in, Brookes kicks things up a notch, removes his shirt and allows the audience right inside his head, to hear his deepest, darkest, and dirtiest thoughts. It’s quite the unsettling thrill, though not entirely original if you have seen Simon McBurney’s The Encounter. As a device for comedy, it’s genius, though I would have liked to see him do even more with it.

As it is, it’s introduced rather late in the show and is taken too quickly to extremes. As Brookes stalks the stage, topless and preening, his body contorting and arcing, saying “I’m the riskiest comic in the business” over and over again to the point of ear-bleeding absurdity, it felt a little like a case of show, don’t tell.

Sam Campbell performs in a grey boiler suit and bright red rubber gloves at a pitch that borders on frenzy. His show is a higgledy-piggledy mix of audio-visual gags, prop comedy, slightly tense audience participation, and–in the case of one running gag involving a gorilla, some spiritual music, and a dance routine–moments of real comic bliss.

Campbell won the 2018 Barry Award–the highest accolade at the Melbourne International Comedy Festival–for this show and he clearly has bucketfuls of potential and a scattergun mind that works in appealingly mysterious ways.

He sets out his alternative stall from the off with a video mash-up in which Kevin Spacey watches the routine of  fellow Australian stand-up Dave Hughes with mounting distaste. What follows is a frenetic jumble of monsters, spoof show posters, and unexpected interventions from all corners of the room.

There’s a play towards the end which doesn’t earn its extended stage time and some jokes feel too rushed but there are more than enough flashes of something rare and beautiful to make you feel like you might be witnessing the birth of something special. 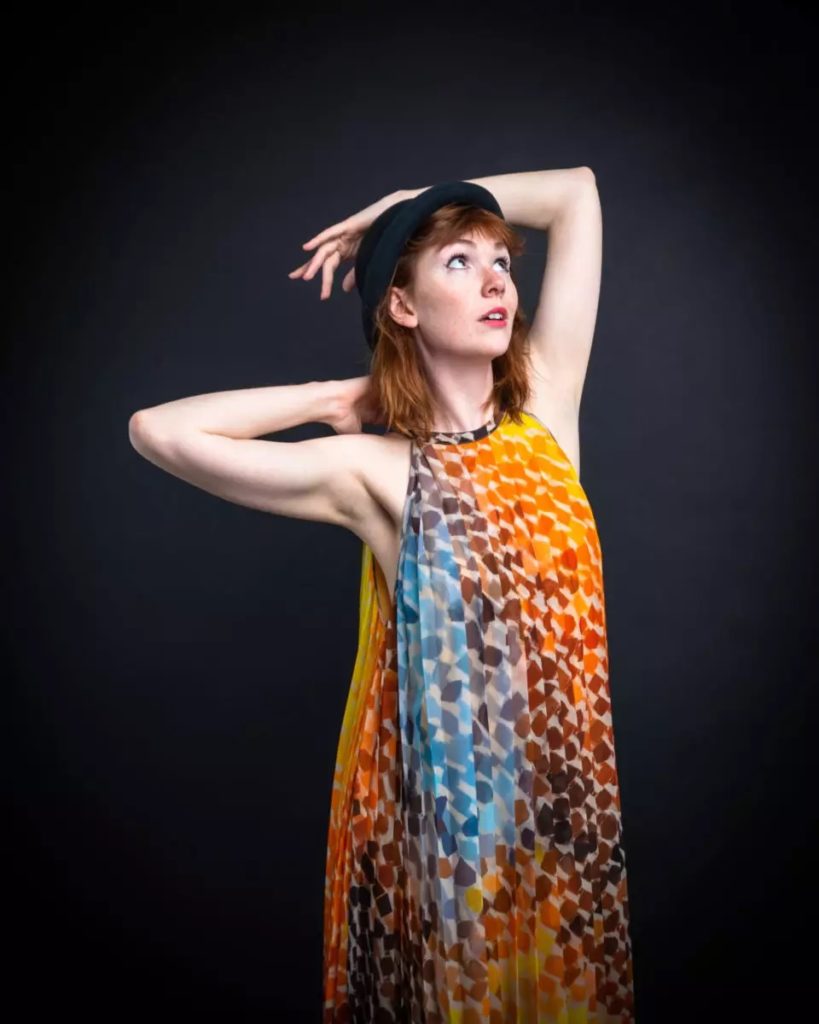 This is a one-woman musical about the economy, Elf Lyons tells us. It is a great idea, even more so when you consider that the woman in question is the daughter of Gerard Lyons, the former chief economic adviser to Boris Johnson when he was mayor of London.

The idea is that Lyons will take everything she has learned from her rather stern father to teach us about what’s going on in global finance, through the medium of song, dance, a couple of sex dolls standing in for Milton Friedman and John Maynard Keynes, and charades.

There are songs–a version of If I Were A Rich Man is adapted for the modern-day super-rich; Downtown becomes Downturn; Olivia Newton John’s most famous hit becomes Let’s Get Fiscal, and so on.

Lyons performs them all with great gusto and Liza Minelli-esque quirk. She is a gifted clown–adept at physical comedy with a wonderful range of facial expressions. You can’t really take your eyes off her.

The problem is she doesn’t know if she wants this to be a musical or a comedy and so has opted for a kind of “isn’t this funny?” knowing chaos which becomes rather wearing. The result: the songs aren’t good enough for a musical and the jokes in between aren’t strong enough for a comedy show. It feels unfinished–an excellent idea that doesn’t quite pay dividends in reality.

This show is a manifesto for absurdism, announces John-Luke Roberts, who is sporting neon shorts and a blue mustache on a stage flanked by two giant urns stuffed with fake flowers and plastic machine guns. It’s a “defense of the laughter of not understanding”–or if you find something funny, do you really need to know why? That is quite a grandiose way of saying this is a silly show that makes absolutely no sense but is packed with jokes. It also has great sound effects.

If you had to describe it–and it’s not easy–the show sees Roberts assume the character of various imaginary Spice Girls–Woman from a British Sitcom Spice, Christmas Spice, Neurotic Spice, to give but three of the many examples.

Some–such as the extended skit about Facts About the Romans Spice–have a distinct Monty Python flavor. Others are brief skits that are no more than excuses for a piece of wordplay. There are returning characters, too, of which his “terrible old crone,” who hobbles around the audience finding ever increasingly awful ways to curse them, is the best.

Some might find the arch surrealism and repeated in-jokes a little tiresome after an hour. Still, if you go with it, this is quite the tour de force from Roberts. It’s not often you come across an entire sketch troupe housed in the body of one man.

This article originally appeared in Inews on August 21, 2018, and has been reposted with permission.