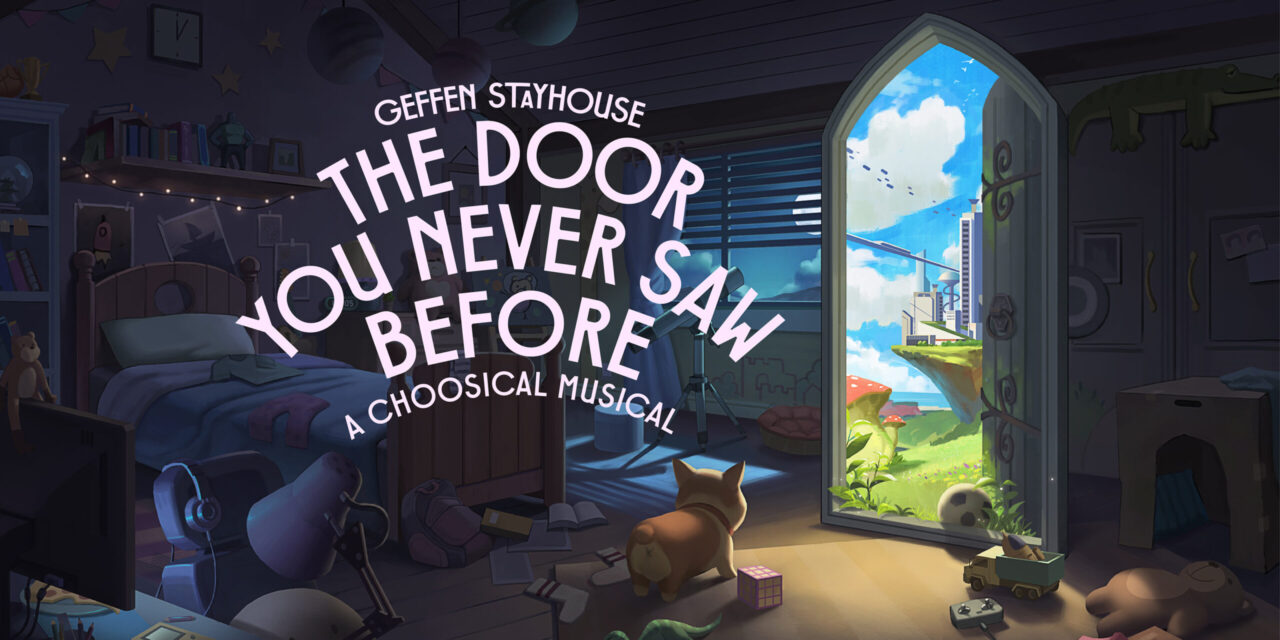 The Geffen Stayhouse production of "The Door You Never Saw Before: A Choosical Musical". Artwork by Shawn Lee.

It’s been a decade of a year, and The Geffen Playhouse (or Geffen Stayhouse as they have been referring to themselves since the pandemic changed our lives) has been reinventing their theatrical experiences via the use of virtual meetings and narratives to distract, engage, and entertain.  Their latest offering ventures into the realm of children’s theatre with The Door You Never Saw Before:  A Choosical Musical with book, music, and lyrics by Matt Schatz, directed by Katie Lindsay.

The show is a musically infused adventure complete with puzzles, puppets, and surprises.  After warming up with games in breakout rooms we meet (Gabrielle Maiden) who explains that she is our inner voice, the one whose thoughts, concerns, and questions about being stuck inside the house during quarantine make up the lyrics of the first song.  That song doesn’t talk down to its audience and doesn’t shy away from frankly admitting that it’s been tough for everyone.  That might sound serious but before too long, a door appears behind her (the door we never saw before!) and we are encouraged to open up our adventure suitcases and search for the key. These are not imaginary suitcases.  The theatre shipped ours out well in advance of the performance and instructed us all to refrain from opening them until we were specifically told to do so during the performance (a solid exercise in patience for the children).   For some, the thought of opening an unfamiliar door might spike anxiety but Maiden strikes a tone that assures us nothing scary is waiting for us on the other side.  What is waiting for us is a city with a problem in the guise of The Stench (Michael Faulkner).  The Stench (who got the compliment that – whoever is saying this has a really good voice for this –  from the youngest viewer in my group) is full of big ideas about how he’d like to change the city to fit his idea of a good place to live.  Needless to say, it revolves around bad smells and the things that cause them. Gabrielle Maiden as Your Voice in the Geffen Stayhouse production of The Door You Never Saw Before: A Choosical Musical. Directed by Katie Lindsay. Photo courtesy of Geffen Playhouse.

The children watching are the guest stars of the show and as they make their decisions, breakout rooms become magical tools to sweep the audience off into different parts of the story.  We met the Overpass Overseer (Shyla Lefner) while a different choice would have taken us to see the Underpass Understander.  Each of the actors takes on other identities over the course of the story in different ways) and we even get to meet a couple of puppets.

Though by its nature the web meeting forces actors into boxes that trim them down into a series of medium shots on individual screens, there’s an intimacy in this format that we don’t always get to experience, especially when it comes to children’s theatre.  That breakout room makes this journey different, though it’s not hard to imagine a live version of the show where children shout out their choices instead of they or their parents/guardians moving a mouse to select it for them. Michael Faulkner as The Stench in the Geffen Stayhouse production of The Door You Never Saw Before: A Choosical Musical. Directed by Katie Lindsay. Photo courtesy of Geffen Playhouse.

The songs are witty and packed with words that may lead to a bit of confusion depending on how attentive each viewer is in your group.  The Stench sings one, in particular, that is full of imagery that might not sit well with those who have a weak stomach (perfect to send children into fits of giggles, however), and none of the songs stuck with me after the show was over, though all were performed with high energy and commitment.  I had the mixed fortune of having an educator in my family audience who pointed out the missed opportunities to possibly tie up ideas that are learned into something the kids can take with them afterward (a mix of numbers, musical terms, and homophones on the well-designed materials in that adventure suitcase left one wondering whether she might be right).  There is also one moment where a character sings “She’s crazy but I love her” – a line that seems out of date, to say the least. Shyla Lefner as The Overpass Overseer in the Geffen Stayhouse production of The Door You Never Saw Before: A Choosical Musical. Directed by Katie Lindsay. Photo courtesy of Geffen Playhouse.

There is an underlying message about personal strength that redeemed that for me a bit.  When we hear one of the characters note that folks “didn’t know you had it in you (to make it through this time) but you did”, it almost brought on the tears because who hasn’t felt that this all hasn’t just been too much to process and manage.   The kids’ favorite character was The Stench (the sound design may have helped that) and the performance was technically smooth even as it included some fast changes in the last section of the show.   Anything “choose your own adventure” has a delightful thrill attached to it and this virtual format not only means kids can be with family in their own homes but also that anyone can see it from anywhere, with anyone, – the bright side we have discovered since we have been forced into the realm of screens.

It is recommended for children ages 6-9 but the ten-year-old who joined us was still engaged by the puzzles and the artwork that we encounter on and off-screen.  I don’t dare reveal what’s inside the adventure suitcase and do strongly suggest you refrain from opening it until you are instructed to by the story as it unfolds (who wants to spoil a surprise?) but I can say that those materials were really well put together and definitely led to other adventures once the show was over.

The Door You Never Saw Before:  A Choosical Musical runs weekends through June 27.