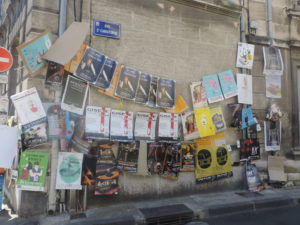 Once a year the small but charming city of Avignon in Southern France becomes the biggest, most crowded theatre stage in the world. Almost every wall, every window, every free space available has some theatre poster on it. Many principal streets, as Rue de la République for instance, become a pedestrian area. Street performers and musicians invade every corner of the city and enjoy their one minute of fame. People from all over the world take over the city streets, restaurants, and hotels during this time of year. Regardless of the high temperatures and the possibility of a terrorist attack, the festival has been taking place every summer since 1947. That’s the year when Jean Vilar, actor and theatre director, came up with the idea of a “semaine d’art dramatique” (A Week of Scenic Art), which years later would become the prestigious Festival d’Avignon.

This year wasn’t the exception. However, after 70 editions, many things have changed. While in 1947 there were three plays and 4800 spectators, today the number of shows has reached the double digits. Also, other artistic forms, including performance, music and visual arts take part in the festival as well. Furthermore, since 1966, the official Avignon Festival has its fringe counterpart: the Avignon Off. In a similar manner as the Edinburgh Fringe Festival, Avignon Off is an open access, alternative festival. It was created by the Théâtre des Carmes (whose directors were André Benedetto and Bertrand Hurault). Ever since its foundation, Avignon Off has given small, rising companies and directors the opportunity to exhibit their work. Many of the artists who have participated in it have later joined Avignon In, including his present-day director, Olivier Py. 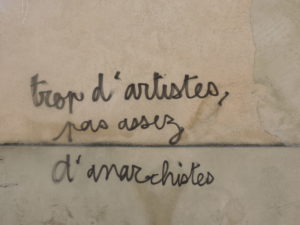 “Too many artists, not enough anarchists”

Since both festivals coexist at the same time, (although Avignon Off always lasts longer), the number of performances is overwhelming. At least for Avignon Off, it is virtually impossible to see it all. The choices are infinite: we’re talking about at least 1416 performances. Moreover, nobody has the time to read all the reviews or descriptions of every play. The Avignon Off catalogue, which includes a plot description of every performance, has on average 400 pages. Audiences can choose between children’s theatre, drama, comedy, circus, dance, dance-theatre, concerts and any hybrid style in the book. In the case of Avignon In, there may be fewer possibilities to choose from, but prices and logistics aren’t less tricky.

In the light of all these opportunities, what should we see, then? Should we only buy tickets for Avignon In because that’s where the “good” performances are? Or should we boycott it on the grounds of its alleged elitism? In other words, how do we choose, and why? Why bother? These are some of the questions I asked myself while attending both festivals this year. And these chronicles don’t aim to answer them, at least not in a definite way. Rather, they offer a (very) subjective description of what I saw, heard, touched and, yes, even smell, during five intense days in Avignon. It’s just a heartfelt reflection on culture, art, and theatre. Welcome to Avignon, where the magic takes place. 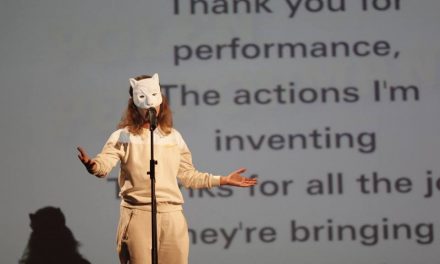