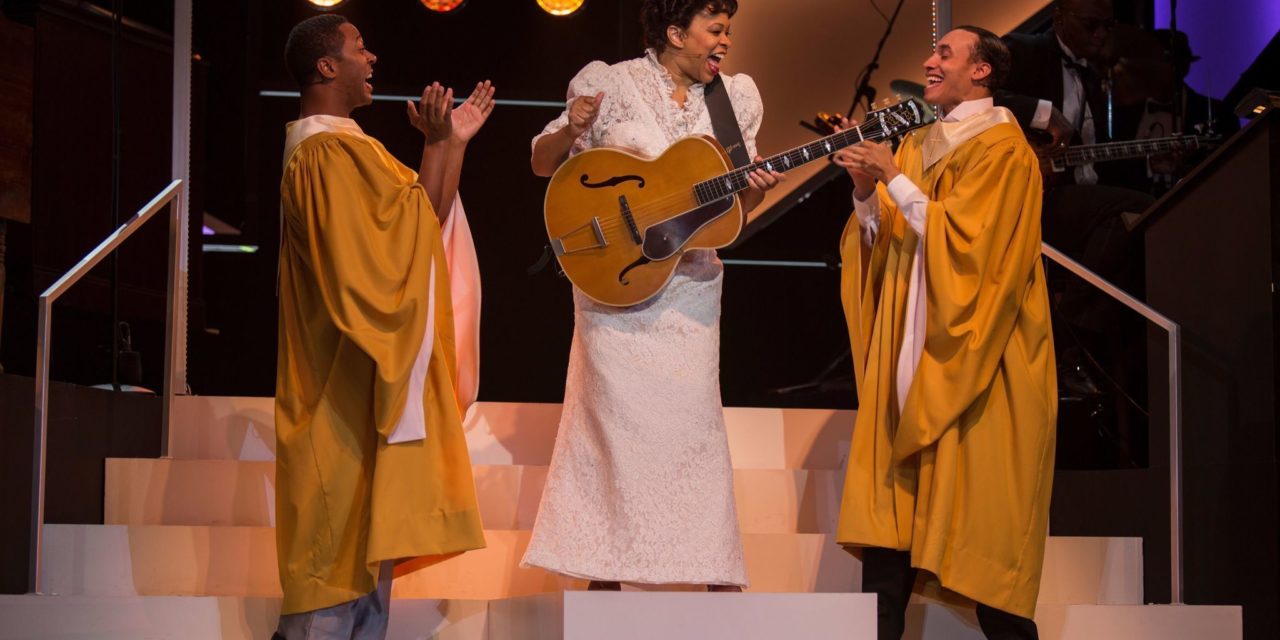 First founded in 1917 as the Pasadena Community Playhouse by Gilmor Brown, who began his career as a producer in a renovated burlesque theatre, The Pasadena Playhouse was named the official state theatre of California in 1937 after Brown and his company successfully produced the entire Shakespeare canon on a single stage (a unique feat for his time).  Once encompassing a campus that included five stages, a scene shop, and a college, the Playhouse is now made up of a 686-seat main proscenium stage with a separate 99-seat black box (The Carrie Hamilton Theatre) and the organization is undergoing a changing of the creative guard.  Artistic Director, Sheldon Epps has stepped down from his position of 20-years to become Artistic Director Emeritus while Producing Artistic Director Danny Feldman returns to LA after working with the off-Broadway Labyrinth Theater Company in New York for the final production of the 2016/2017 season.  The production is the new musical entitled Shout Sister Shout!.

Based on Gale Wald’s book (Shout, Sister, Shout!  The Untold Story of Rock-and-Roll Trailblazer Sister Rosetta Tharpe) the musical endeavors to introduce audiences to a woman Creator/Director Randy Johnson (writer/director of the Broadway musical A Night With Janis Joplin) characterizes as “the best-kept secret within the landscape of musical giants”.  Cheryl L. West (Play On!) is credited as Creator and Book.  For those in on the secret, Sister Rosetta Tharpe is known as “The Godmother of Rock & Roll” and as a trailblazer that influenced the likes of Elvis Presley, Aretha Franklin, Little Richard, Bob Dylan, Tina Turner and Johnny Cash.  As an African-American woman born in 1915 who played the electric guitar and pioneered the rise of pop-gospel, she must have been something truly special.  Unfortunately, for all of the talent bringing her story to life on this stage, we never really get to know who she was.

The production opens with a flood of gospel music as Sister Rosetta Tharpe (Tracy Nicole Chapman) appears at the top of a staircase wearing a white bejeweled choir robe and a Gibson electric guitar.  Ms. Chapman proves she can more than sing, and is supported by an ensemble and live band who blow the roof off the theatre in a show of pure musical talent that had people jumping in their seats from the get-go. It doesn’t take long to recognize that the set (designed by Steven C. Kemp) is smartly constructed to suggest both a church complete with a hint of ‘stained glass’ lighting in one upstage window and a revival tent – both locales speak to aspects of Sister Rosetta’s life.  If you’ve never been to a revival meeting, you could leave this show saying you’ve been to one now and whether you believe in what Sister Rosetta preaches or not, even the most hardened skeptic would have to admit there’s something moving and just beautiful that comes to life in her music under the music direction and with arrangements by Rahn Coleman.

This powerhouse of an opener is interrupted by an offstage ‘Voice of God’ who stops Sister Rosetta from climbing the steps with her fellow singers.  This voice tells her that she is needed back on Earth where a young musician by the name of Isaiah [Logan Charles] has lost all hope and considers ending his life.  Certain her story will inspire Isaiah – to what end we are always a little hazy – God sends Sister Rosetta down to act as Clarence to the young man’s version of George Bailey, only with the opposite task of having to reveal aspects of her life to him.  There is one delightfully funny beat when Ms. Chapman reacts to the sight of her charge with a bemused exclamation of ‘He’s white’, but Sister Rosetta does as she is asked and takes Isaiah back in time to her 18-year-old self during a church service where she meets her first preacher husband [spoiler alert, he turns out to be less than delightful].

As Sister Rosetta leads Isaiah from one story from her life to another, Ms. Chapman is able to deftly maneuver through scenes where she speaks as her younger self to people from her past and then shifts to interact with Isaiah in her ethereal present.  We don’t really understand what happens to Isaiah in these moments – he spends most of his time sitting by, watching.  That’s not nearly as distracting, however, as the guitars that Sister Rosetta returns to over and over – each time taking one down from the bandstand wall that makes up the lower half of the set to return it shortly after.  One either wishes that Ms. Chapman had been directed to keep the guitar with her throughout, or that she had been taught to be a more convincing guitar player given the fact that Sister Rosetta was known for her skills.  Perhaps both would have felt like less of an interruption, especially when her story takes her back into songs where she is joined by the ensemble and the energy of those songs sweep us up into the moment in spite of ourselves. 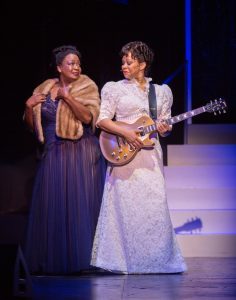 Miserable in her first marriage where she was prohibited from preaching and performing as she once had with her mother, Sister Rosetta takes her musical talents to the streets, hinting at a rebellious nature that the production glosses over entirely.  Both Sister Rosetta and her mother Katie Bell [portrayed with impressive strength and dignity by Yvette Cason] enjoy moments of biting dialogue where they get back at the disappointing men in their lives with a ferocity that got the audience shouting and applauding with glee but as the story progresses we glean that Sister Rosetta had not one, but three husbands, got famous in some fashion we never hear about and that she hung out with and inspired musicians who barely have a presence on stage.  Thomas Hobson gives his all in an inexplicable moment where Little Richard appears to perform with her and there’s one beat where Ms. Chapman executes one of Chuck Berry’s classic guitar ‘duck walk’ maneuvers but we need Isaiah present to point it out to us and it has no lasting meaning.  Throughout, Ms. Chapman delivers lines of dialogue that seem crafted to sap the pain and humanity out of her experiences, making us wish we knew her better.

In the second act, we get to learn more about Isaiah and his difficult past but that hardly registers before we are slightly thrown by a surprising relationship that develops quickly between the singer Marie Knight [portrayed by the delightful and quite moving Angela Teek Hitchman].  Never having dealt with any challenges Sister Rosetta might have faced on her way to fame and fortune the production tiptoes around this relationship even though it seems to have been the one that made her the happiest.  It seems that the musical is torn between a desire to explore the truths in Sister Rosetta’s painful memories that are meant to inspire Isaiah to write music from his heart, and a need to make everything ‘nice’.  When Mary Knight receives news that her mother and children died in a house fire, she blames that tragedy on her relationship with Sister Rosetta and leaves.  This is the most powerful emotional beat in the show and it is barely granted the time it needs to land, let alone resonate.

By the time we arrive at the moment where Isaiah feels he has a true song to share the one he delivers feels both as rushed emotionally and as flat as the rest of the piece does in comparison to Mary Knight’s sudden flood of grief.  Written by Melissa Manchester and Sharon Vaughn, “When I Look Through You” doesn’t have a fraction of the heart and soul that drives the rest of the music.  In fact, the presence of it and of the other Isaiah-driven song by Manchester and Vaughn (“Somebody’s Got To Know”) makes us wish the creators had trusted Sister Rosetta’s music enough to just let it be without forcing this narrative structure on top of it.  There’s something uncomfortable about watching this young white musician succeed after using Sister Rosetta’s experiences to find his way.  One wonders what might have happened if they had chosen a Lost Highway or Will Rogers Follies route to the heart of Sister Rosetta’s story and let her music and her story be enough.  There’s also nothing wrong with a musical revue, especially when it has the potential to feature the kind of artists you can see on this stage in Pasadena.  All told, if you are looking for a deeper dive into this thoroughly intriguing woman’s life, the book feels like a better way to access her story.  If you feel like listening to some incredible singers belt the hell out of creation, catch this musical and enjoy.

Celebrating its centennial this year, The Pasadena Playhouse’s 2017/2018 season will feature Our Town  by Thornton Wilder (a coproduction with Deaf West Theatre), the Olivier-winning play King  Charles III by Mike Bartlett, The Hypocrites immersive production of Pirates of Penzance by Gilbert and Sullivan [adapted by Sean Graney and Kevin O’Donnell], Bordertown Now by Ric Salinas & Herbert Siguenza with new material by Richard Montoya [presented by Culture Clash – a sequel to Bordertown], plus one additional play to be announced at a later date.